“Us Three’s title track  bristles with a funky wail that characterized Parlan’s forays on such Mingus works as “Wednesday Night Prayer Meeting” and “Better Get It In Yo’ Soul.” An all-time Parlan classic” – AllAboutJazz

Whilst claiming to be influenced by Bud Powell – which pianist wasn’t? –  Parlan can be likened more to John Lewis and Tommy Flanagan and, at a stretch, Horace Silver. Not that you would necessarily know from listening, but Parlan suffered limitations on some fingers of his right hand as a result of a childhood illness, and in compensation developed a more powerful left hand, resulting in a stylistic leaning towards lower-register chording and rhymthic  drive, comping on the right hand,  but also able to weave in melodic phrases and swinging single-note runs.

His defining strength, however, is not so much his technical skill in solo, as his close interplay with his fellow musicians – something which is less immediately obvious until it rolls over you. His interplay with Tucker’s storming energetic bass on Us Three is astonishing. Add Harewood’s ability to maintain that rhythmic propulsion, you know you have something out of the ordinary happening here, not just another piano trio but a complementary tight-knit unit, which can travel at great speed and with great mobility, and with whom you will want to hitch a ride.

1960 was Parlan’s golden year with Blue Note, in which he recorded four titles as leader, with Us Three following close on Movin’ and Groovin’: (review LJC last December)

Drummer Al Harewood was the common thread, with  George Tucker on bass on three of the four sessions.

In 1970  Parlan relocated to the expatriate US jazz community in Denmark (Dexter Gordon, Ben Webster, Idrees Sulieman, Sahib Shihab). His ability to attune sensitively to other musicians made him a natural choice for Archie Shepp in his Blues and Gospel sessions in the later ’70s (Goin’ Home and Trouble in Mind)  for Steeplechase , and subsequent live performances.Parlan, as a fine-tuned musician, was in the league of those who could be relied upon to know what to play without having to be told.

But what of George Tucker? His astonishing contribution here led me to want to find out more. His sideman session list bristles with five-star titles, Eric Dolphy Outward Bound, Dexter Gordon Doin’ Allright, five titles with Parlan, Curtis Fuller Vol 3, Freddie Redd, Booker Ervin, Jaki Byard, and many more, running from 1957 through to 1965, where it stops dead, usually a bad sign. Tucker suffered a fatal stroke while performing with Kenny Burrell in 1965, at the age of only 38. In a cruel contrast, drummer Al Harewood reached the age of 90, before finally departing in Spring, 2014.

Taken from original Blue Note archive tape, Us Three is no ordinary transfer, it verges on the supernatural in its power and drive. With what was already a high-octane performance, it grabbed my attention and had me sitting up miming Tucker steaming up and down the bass neck, in one of the first recorded cases of involuntary air-double bass guitar.

The excitement is infectious, causing one of my hi-fi-buff friends to laugh out loud. “Andrew! Modern reissues aren’t supposed to sound like this!“. Auditioned on three different systems, each time its strength shone out like a lighthouse, rising up from a sea of competent but ultimately unexciting modern reissues.

MM33’s continue to impress, extracting maximum information from the original Van Gelder recording, and packing it into the grooves, sounding natural and fresh, with a lively top-end, a midrange with punch, underpinned by well-tempered taut and musical bass, richly detailed with full dynamic and tonal range.  All kudos to Ron Rambach and Kevin Gray for a remarkable production.

Francis Wolff photos of the session, beautiful chiaroscuro, Tucker and Harewood listening thoughtfully to playback, Horace as usual, just smiling. All of them have good reason to be pleased with the session. 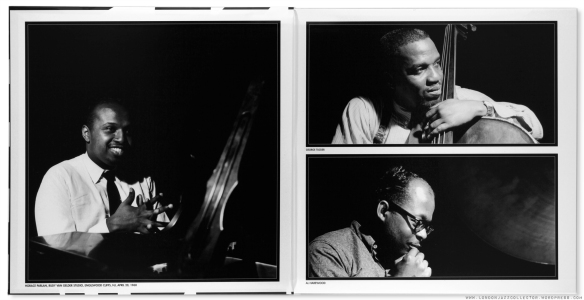 The 47 West 63rd address is perfect, the colour blue is perfect, the vinyl weight is exact at 180 grams,  and the cursive P in the run out is a nice touch, though in the interest of true authenticity it should be inverted (picky picky, LJC!)  It is of course a complete work of fiction, as this record never existed (see Collector’s Corner below)

Given the anodyne nature of some “piano trio” sessions, as a benchmark,  The Three Sounds ten best auction results of all their titles range from $176 – $303.  Us Three is in a different league. The ten best  auctions results for BLP 4037 are in the range   $898 –  $2,669 , getting on for ten times greater. I sense our friends in Tokyo are on to something, they know.

It is doubly interesting that a stereo edition of BN 4037 was never issued by Blue Note. Given the shaky early beginnings of Stereo at Blue Note, quite a number of titles were issued in stereo only some time later, or in this case not at all. All the premium auctions of Us Three below are mono. 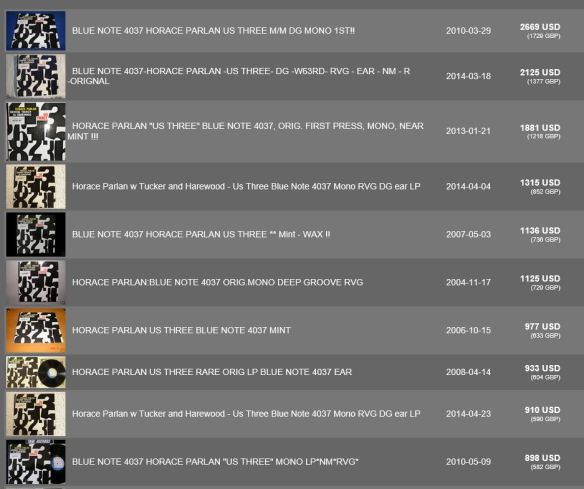 I didn’t have an original mono, nor can recall even seeing a Liberty reissue of Us Three, and now I know why. Even if I had, I would probably have dismissed it. “Do I really need another piano trio album?” We make assumptions all the time, that’s what gets us through the day.  This would have been one of those assumptions that causes you to overlook something special.

You find out these things only if you dig beneath the surface, which requires time, patience and persistence, all of which seem nowadays in short supply. Except at LJC, where they are found in generous quantities. Only The Birdman of Alcatraz had more time on his hands.