Donaldson remains the leading exponent of the soul-jazz approach. Yet even at its bluesiest, his playing remains informed by bebop.”

Music
A typical  Discogs contributor review I came across recently:

That’s it. Tells you absolutely nothing, other than “I like it”.   Citizen journalism in the age of the Internet: complete poverty of expression. Can do better, mate, try harder.

In the foot steps of his signature tune Blues Walk, Gravy Train offers a generous helping of Lou Donaldson bluesy “soul-jazz”. Donaldson’s signature style artfully weaves together bop, blues and soul. Not essential or ground-breaking music, but a bit like the hot dog Lou is munching on the cover, not great cooking, but there is a time and a place for something basically nourishing  and satisfying.

The alto is a hugely flexible vehicle of personal expression. With Art Pepper it becomes a walk in the park, with Dolphy it can morph into an instrument of feverish saturnine  excess; in the wrong hands, the alto can cause … death by saccharin.

With Donaldson, fluent in the bop vocabulary and Parker heritage, the alto turns into liquid silver. Donaldson is one of those infectiously happy players who just loves to play, his alto dancing in the upper register, a heartful lyrical improviser who grabs a tune and runs with it, wherever it takes him, until he is satisfied it’s done. You just join him for the ride.

He is accompanied here by the rolling blues-inflected piano of Herman Foster, a regular feature of Lou’s quintet over 13 years, another of that legion of ultimately under-appreciated players.  Thankfully piano,  not the omni-present soul-jazz organ featured in some of Donaldson’s later cross-over albums –  leaving the field open for real bass as opposed to organ bass pedals. (Campaign For Real Bass!) For added Latin spice, Dave Bailey’s  percussion is supplemented with congas (Alex Dorsey), delivering midpoint between quartet and quintet.

Donaldson  has been recording since 1952, a solid body of work under the aegis of Blue Note which detoured to follow more commercial formula in the ’70s, but seems to have found its way back to bop.  He is one of the few bop  masters still standing and playing today, in his late eighties.

Among the first batch of Blue Notes to be released in 1961 on the new NY label , and among the last batch to bear the RVG stamp, replaced later that year by the VAN GELDER stamp, and the time deep groove dies were largely phased out.

The original press according to Cohen should have Side 1 deep groove, though not this one, oh well. Over in “Collector’s Corner” below, a further smidgeon of doubt creeps in, with an earlier label found not identified by Cohen, which goes to show, no-one knows everything.

Every copy listed on Popsike refers to the “original” being on NY labels, yet one auction stands out from the crowd as a price outlier at 363 USD, twice the next nearest auction price. 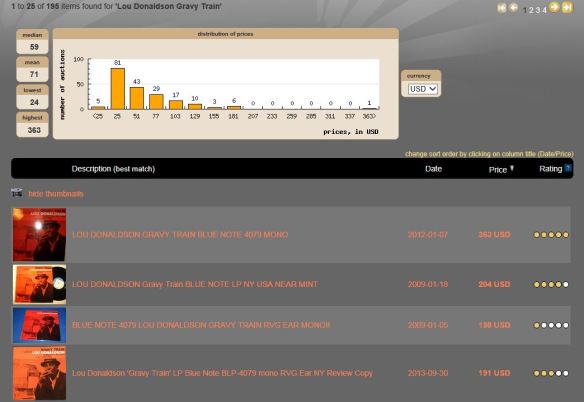 What caused the price to double that previously? I had to look. That copy claims to be on 47 West 63rd labels. Some mistake?

“Disc has 47 West 63rd NY address on both labels”. No photo but enough to  shoot the price into another league – someone with acute attention to detail, willing to wager a princely sum on a record “visually graded only”, but with that magic description “mint, possibly unplayed”, not something that turns up very often from 1961, and with 47W36rd labels, never at all.

Still, I’m happy with my not quite original, with its grubby cover.  Easy to please. Even enjoy the occasional hot dog.