So, a tribute to Bobby Hutcherson, starting with the NYT official obit’ (they come out so promptly you have to figure they have a whole drawer-full of artists, marked “pending”) 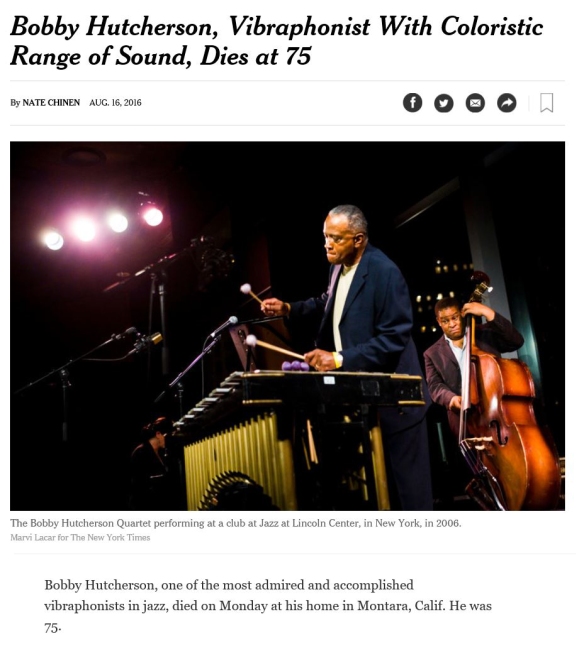 Bobby Hutcherson, one of the most advanced exponents of the jazz vibraphone, died August 15, 2016, at the age of 75. Jazz critic Bob Blumenthal said of Hutcherson: Bobby “would probably be more widely recognised as one of the ’60s finest musicians if he hadn’t played the vibes“.

The  vibraphone – vibraharp, or just plain vibes – is one of a family of instruments classified as a “struck idiophone”. (I challenge anyone to find a better description of being surrounded on mass-transit by people engrossed in their hand-held devices)

Lionel Hampton, Milt Jackson, and Bobby Hutcherson are arguably the most distinctive voices of this family of instruments. Not to forget Red Norvo,  Gary Burton, Roy Ayres, Cal Tjader, Walt Dickerson and many others of note, but the sheer versatility and adaptability of Hutcherson ensured he remained  the vibes-man of choice over many decades.

The vibraphone is a hybrid keyboard-percussion instrument, with some of the qualities of both. The use of multiple mallets, two in each hand,  enable chords in addition to linear patterns.  This permits the vibist an unusual opportunity to shape his contribution to the jazz ensemble. At the percussion end, it offers percussive rhythmic metre, complex polyrhythms or free counterpoint. The cool ringing tremolo/vibrato of metal offers dense sustained tonal colourings and textures. At the melody end it holds a fine lyrical solo, or  harmonies against other instruments.  Hutcherson mastered all these opportunities in a way which enabled him  to blend seamlessly with the demands of many styles, artists and moods.

He was introduced to the Blue Note roster of artists in the mid ’60s, recording three outstanding titles as leader. For me, Dialogue (Idle While) is peerless, however his contribution to other artists titles was no less enthralling. Try to imagine Dolphy’s Out to Lunch, McLean’s One Step Beyond, or Grant Green’s Idle Moments without Bobby Hutcherson. His was a core contribution to those momentous  ground-breaking recordings.

His choice in artist pairings was also a key strength, given his pendulum career between east and west coast.  For tenor, on the East coast, collaboration with Joe Henderson, and on the west, a long-term collaboration with Harold Land. Given the similar musical territory occupied by piano and vibraphone, his keyboard collaborations were all the more audacious, with Andrew Hill, McCoy Tyner, Herbie Hancock and Stanley Cowell  and new kid on the keyboard, Chick Corea on the west. Joe Chambers was frequently behind the drum kit, point man on the avant-leaning works, a drummer who knows what to play when others didn’t, while Billy Higgins adds delicious propulsion more than just timekeeping.

Into the Liberty years, and beyond into the United Artists years, amidst Blue Note’s sea of reissues,  Hutcherson was one of the few artists providing the label with new titles. What followed was a changing roster of artists, electrification of piano and bass, venturing into avant-leaning post-bop, modal, latin, atmospheric soundscapes, and a soupcon of funky swing.

Liner notes were deemed redundant: the hat now spoke for itself, though quite what the hat had to say remains unclear, something about the music perhaps, not at all funky, something altogether more cerebral. Methinks perhaps the hat miss-spoke.

Through the ’80s and 90’s Hutcherson  went on to record a considerable body of work for Landmark and other labels, was awarded national recognition with NEA Jazz Master Fellowship, and toured with his own quartet.  His major work had however already been largely accomplished, as a crucial part of the vanguard of new jazz developments in the 60’s and ’70s. That, indeed, is enough contribution from any one. The rest is a bonus.

Bobby Hutcherson: The Liberty Years and beyond

We pick up Hutcherson’s discography on the cusp of the sale of Blue Note to Liberty Records Inc., with 4244 Stick Up, first released by Liberty.

The selection Verse is the veritable son of Idle Moments, and compliments don’t come  any higher from me. Hutcherson generously gives plenty of space to everyone, Joe Henderson delivers his gruff squawking solos to order as you would expect, but the magic here is  Tyner and Higgins playing off each other. Higgins snare-kicks and accents maintain propulsion through a piece that is simultaneously dreamy and spacious, a languid modal undertow, with backbone. Outstanding.

The other tracks are all on their own ways something special: Ornette Coleman’s Una Muy Bonita gets a muscular workout, the angular  Black Circle offers shades of Out To Lunch, Summer Nights an ethereal ballad tiptoeing over misty ground, McCoy Tyner in lyrical melodic mood while Hutch floats featherweight over the harmonic soundscape, 8/4 Beat an intelligent piece with modal swing, and I assume from the title, something playful with time signatures, and not Brubeck.

I consider this album essential, and but for chance, the timing of the sale of Blue Note, it would have been Hutcherson’s fourth original Blue Note. Musically it belongs within the fold, but  it is not a Liberty/ NY Blue Note (All Disc) manufacturing-wise, my copy fell hostage to later practices.

This should be  Van Gelder master, but my copy isn’t.  Copies exist with Van Gelder master stamp (Popsike confirms),  but the majority of sales make no mention of Van Gelder, some note its absence, only the minority claim the master stamp. This could be an east coast/ west coast manufacture thing, where Rudy did a master but a west coast engineer was  thrown a tape to master it for himself.

The label is not from Keystone Printed Specialties (original Blue Note’s house printer). It has the characteristic yellow/cyan bias of later Liberty “mongrel sourcing”, no pride of production engineer or plant  hallmark, just a matrix catalogue number hand written, jobbing manufacture. The music is great, it deserved better.

The vinyl has indications of being bulked up with a little recycled vinyl, though not to the degree of being obtrusive like some Prestige New Jazz. At the time I’m not sure anyone knew or cared.

This was an early purchase, I knew little when I acquired it, and to be truthful it remained un-played for a number of years. That is the humbling lesson of obituary-jazz: your musical palate changes over the years, you are not hearing the music you first heard those years ago. You now have a better informed palate, you will notice and appreciate things you didn’t get first time around. Things connect in a new way, because there is more available to connect with.

It is suitably humbling to go back to something you didn’t think that much of, and rediscover what you have missed first time around. You have a brilliant record you didn’t know you had, and it hasn’t cost you a dime. My only regret is the manufacturing shortcomings, but I didn’t understand that then either.Anyone with a Van Gelder copy out there?

Any thoughts on Hutcherson’s legacy?  Call out your favourites. There is more to follow!

17 thoughts on “Bobby Hutcherson: A Retrospective”