Probably the finest Shorter Blue Note album, apart from all the others. (Later in the post, you will see I’ve popped in a Shorter favourites poll). The cover of Schizophrenia shows  solarised mirror images of Shorter, symbolic of the schizophrenia beloved of ’60s popular psychology and Alfred Hitchcock movies . How’s your mum, Norman?

Warming to the split personality theme, I have two copies of Schizophrenia, both stereo naturally, begging for a shoot out: an original copy on Liberty, and the last gasp of Blue Note on vinyl, a Connoisseur from around 1995, over two decades apart. 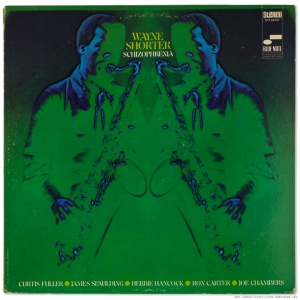 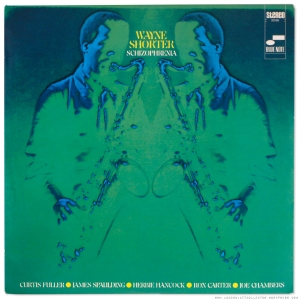 A Shorter sextet tour de force, rich in harmonies from the combination of alto/flute, tenor and trombone, blistering forward propulsion from Joe Chambers. Hancock scampers all over the keyboard, picking up motifs and echoing fragments, dancing around the other players, while Carter weaves his masterful roving walking patterns. Shorter’s pungent tone and energetic angular runs are busier here than on some of his other more stripped down work.

The selection tune Tom Thumb combines sassy brass heads with undertow of boogaloo swing, infused with sweet and sour solos, a juggernaut of modern post-bop-funk. I don’t think you find this delicious conflation in many places, which owes a lot to the  unexpectedly spicy inclusion of  Curtis Fuller and James Spaulding.

While you are hanging on to the individual pyrotechnics and interactive dynamics, Schizophrenia has strong compositions which burrow their way into your consciousness. Each tune has its own mood, and complement each other into a very satisfying and cohesive album, Shorter at the peak of his powers, battle-hardened from two years working with Miles Davis, and telepathic communication with his other players. An album that repays repeated listening. As it happens, it’s my favourite.
Best Shorter  albums on Blue Note?

Impressed with the response to the Dexter Poll, let’s have more of the same, help steer any new collectors in the right direction. From those below, which are your favorite Shorter Blue Notes? His Blue Note period nudges well into the Liberty Years, but Shorter was a relatively late starter. He did return to Blue Note in 2013 for the album “Without a Net” (which  I’m not including, as only a CD) 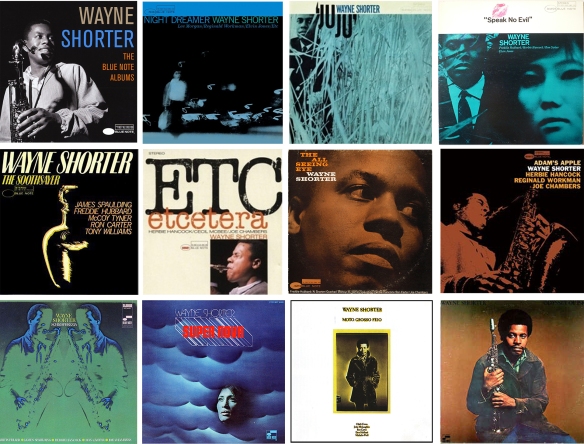 Choose up to four, poll closes in one week. Check back and see who are the favorites.

Anyone who’s seen any octogenarian Shorter concerts recently, I’m sure readers will be interested in your observations.

Van Gelder, later Liberty Records as part of Transamerica Corporation, issued around 1969 (cover bears copyright © MCMLXIX). Label colour is later off-white, and ® is malformed, printing farmed out, all a signature of its late Liberty issue.

Capitol Records Blue Note Connoisseur series reissue of BST 84297 170gm vinyl weight. Liner Notes say mastering by Larry Walsh, run out says Mastered by Capitol – Wally (Trautgott) Make your mind up! Either or both of them. 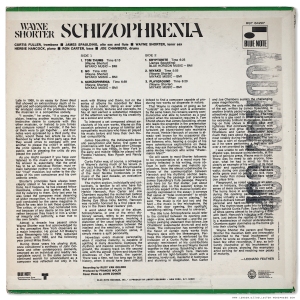 Left, one of the very first Blue Notes I bought, a promo copy on Liberty, long before I knew anything about the mechanics of  review copies and pressing quality. It looked clean, but disappointingly, had more “pops” than a kid’s breakfast cereal, and as a result  was hard to enjoy. The RCM made little improvement, but recently I hit on a primitive cleaning “technique” effective at reducing some vinyl pops. 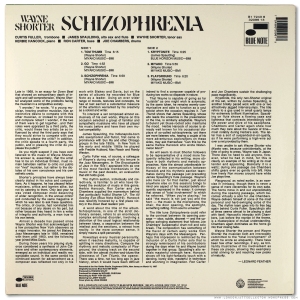 I bought the inexpensive Connoisseur  to get around the problem of surface pops on the original, but I have to say its sonic performance leaves the Liberty original as my preference, especially since the enhanced  pre-wash method sorted out most of its “popping” issues.

Obsessive Compulsive Cleaning Disorder sufferers, go wash your hands – twice to be sure, and then read on.

Isolated pops are particularly annoying when the record looks otherwise in excellent condition, but plays with random intrusive pops, the sound when the sensitive  stylus hits a tiny but immovable obstruction. These are not scratches, but trapped specks of grit gripped or welded in the grooves, probably a result of environmental storage and handling practices decades ago. Most vinyl will exhibit occasional pops, but some records have a more troublesome problem, and my audition copy of Schizophrenia was one of them.

Tip: forget the golden rule “never touch the grooves”. Hold a record directly under an anglepoise lamp and tilt in the light Amongst the inevitable household dust, there may be some larger particles, seen as small white specks (and others you can’t see) which are “grit” wedged in the grooves.

Brush gently with three dry fingers in the direction of the grooves, turning the record slowly  full circle in the other hand. Tease any specks of grit, along with any  dust, off the side of the record. Any specks that refuse to shift, apply firmer finger pressure to lift it away, and last resort, push a fingernail. Two or three times around the record until you find no more, then repeat on the other side. Then go straight into record cleaning machine mode, wash and vacuum.

You may be surprised how much “grit” you will feel, that you can’t see. I encountered fifteen to twenty non-dust “specks” on each side of Schizophrenia, despite it having previously had three RCM washes which failed to eliminate the popping problem.

Several records troubled by excessive pops have been rescued from oblivion by this DIY method. It doesn’t eliminate every thing, but it has improved the listening experience without the disproportionate cost of an ultrasonic cleaning machine, which is probably the long term solution.

As a result of enhanced cleaning, I have a choice of two copies of Schizophrenia. I’m ok with that, on alternate days.