The mandatory go-to boogaloo Morgan  track is  Psychedelic,  a sort of Sidewinder III with a Tijuana drive-thru/ Tex-Mex flavour ,  but other tracks stray into more interesting territory. My pick is the urban car-horn brio of Short Count: choppy boppy accents, stubby with underlying propulsion, cityscape, Jackie grabs a chance to wail, and Morgan excites. It all feels very New York.  Call me a cab, downtown!

Headwear of note: Morgan is sporting an astrakhan hat, traditionally made from karakul Persian lamb fur. All hats are a statement.  In ’60s parlance, an astrakhan confers on the wearer the status of “serious artist/ intellectual”. Or alternatively, a Soviet dictator.

Tenor saxophonist Frank Mitchell played regularly with Lee Morgan at Slugs’. Like many tenor players of the time, he was a strong mainstream performer,  influences of Coltrane and Mobley, a little Henderson, a promising voice. He made only a handful of recorded appearances, a couple under Morgan’s leadership, also appearing on the 1966 Art Blakey album Buttercorn Lady in a line up with Keith Jarrett (!)

Soon after recording The Sixth Sense,  Mitchell’s body  was found floating in the East River. The East River exit route was also taken by another NY jazz giant, Albert Ayler, though in Mitchell’s case not by his own hand,  apparently the result of a drug deal that didn’t work out. For him, at least.  Mitchell’s short music career  ended abruptly, age 27, which is probably why the name is unfamiliar to many. I thought I had heard of him, but it was a  case of mistaken identity: Frank Mitchell, Frank Foster, Billy Mitchell, Blue Mitchell, Red Mitchell, …Roger Cook, Richard Cook,  I sometimes confuse names, but not to worry, it’s the internet, someone will call you out on any mistake pretty quick.

“Transition between one of the most intriguing sextets during the last years of post-bop and Morgan’s final ensembles” (All Music, 4 of 5 stars)

Morgan is credited with  four of the six tracks, noting his evolution from mere trumpet player to composer, though that may also underline the growing importance of royalties in the music business

Despite a recording date  at the end of 1967, the new release review in Billboard (July 25, 1970) indicates it was not released until mid-1970, firmly into the transitional Transamerica years  of Liberty, and shortly before the management merger with United Artists. This explains the late Liberty labels.

While emphasis is rightly given to recording dates as  signpost of artist development, the often concealed release date often tells us more about the context of the artist and the state of the industry.

Blue Note biographer Richard Cook noted the 1967-71 Blue Note team of Francis Wolff and Duke Pearson running against signs of the times, as college audience attention moved to “singer-songwriters and album rock, Bob Dylan, Country Joe and The Fish, and Jefferson Airplane”. What did college audiences ever know about anything?  Culturally, jazz was simply moving from mainstream to niche, as electric guitar, protest lyrics and most important of all, hairstyles came to dominate youth attention.   From the vantage point of 2017, Blue Note was continuing to produce enduring music which is welcome on my turntable today, everyday, unlike that dated old West-Coast hippie guff.

Three horns (Morgan, McLean, Mitchell) pass the solo torch from one to another, keeping the mood cool and applying a little tension. Morgan’s characteristic warm confident tone, tight phrasing, lyrical melodic vocabulary. Jackie McLean is in fine form; fluid and impressionistic, turning on the heat where required.Cedar Walton continues to delight with his steadfast comping while Billy Higgins offer his reliable supple propulsion

Frank Mitchell showed tenor promise unfulfilled, a reminder that one of the most harmful aspects of drug use was not drugs themselves, but the sort of people users had to deal with to get them. It’s not generally good business to kill your customers, at least not straight away. Perhaps a pay-day-loan might have helped Frank meet the cost of his next score?

Recorded in the closing months of 1967, released by Liberty UA Inc. – Blue Note  under the conglomerate whip of “Transamerica Corporation” If there is one thing I do not want to be, it is to be entertained. Cover design Bob Venosa, no Reid Miles. It shows. However a VAN GELDER stamp shows all is well in the vinyl  fundamentals you can safely ignore the superficial  changes.

The run-out contains the inscrutable “114” etching found on a number of Liberty records, meaning unknown. If anyone wants to venture an explanation, save it, I’m not interested, I had that for a long time with the Blue Note 9M. 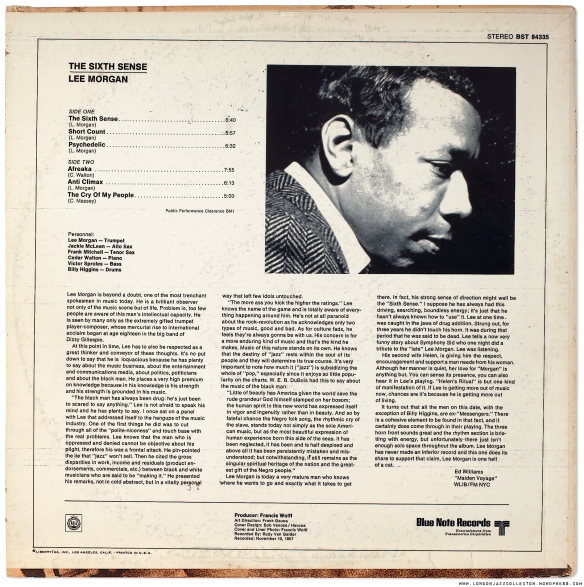 Simultaneous east and west coast manufacture, the other Liberty release label shown below, classic BN design, but not any more authentic. Note the mal-formed ® under NOTE, characteristic of Late Liberty, print and pressing  farmed out and no longer under the aegis of All Disc and Blue Note’s original label printers, Keystone Printed Specialties.

My theory is that the use of cheaper paper stock for the label permitted the ink to bleed further through the fibres, “drowning” the fine circle around the registered mark. This could be completely wrong, but nowadays being wrong is an increasingly popular outcome.  Trending!  #LJCcompletelywrongagain. 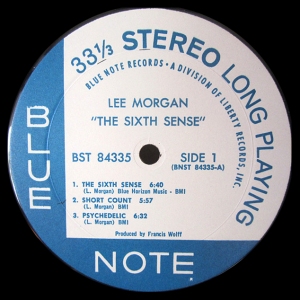 This is an undervalued Morgan title well worth seeking out. It is  not in the Blue Note 1500 series league, but you get an awful lot of music in exchange for very little money, rather than the other way around.And it’s available with Van Gelder , on my Liberty UA at least. The Discogs entry for the Division of Liberty classic label makes no mention of the VAN GELDER stamp. Come on guys, these things matter! Possibly it has, can anyone clarify?

I have a theory that Liberty/UA manufactured on both coasts, but that RVG metal didn’t always travel, hence some titles are found with and without Van Gelder.  #LJCanotheruselesstheory. Viral!