Forget we are in 2017, MM’s gorgeous gatefold captures fragments in time, you are about to travel to a different time and place, reset your calendar, let Francis Wolff’s camera transport you to 1964:

Duke Pearson( b.1932 – 1980): a foundation of Bud Powell, the rhythmic precision of Wynton Kelly and Sonny Clark, infused with the  romantic expression of his own lyrical ideas. Composer,  producer, performer,  arranger, and as  Blue Note’s A&R man following Ike Quebec, Pearson played a big part in shaping the label’s hard bop direction in the 1960s. He will be remembered for his sympathetic comping on many Blue Note sessions, his attractive catchy compositions (Cristo Redentor), his cinematic landscape of rippling arpeggios (Idle Moments) , Sidewinder-like jumpy boogaloo outings (Sweet Honey Bee, and The Phantom), and deft, artful modal arrangements (Wahoo!).

His “Blue Note Collection” as leader runs from 1960 through to 1974, spanning the Liberty and early United Artists years, dabbling in bop, boogaloo and big band. I have six of them. 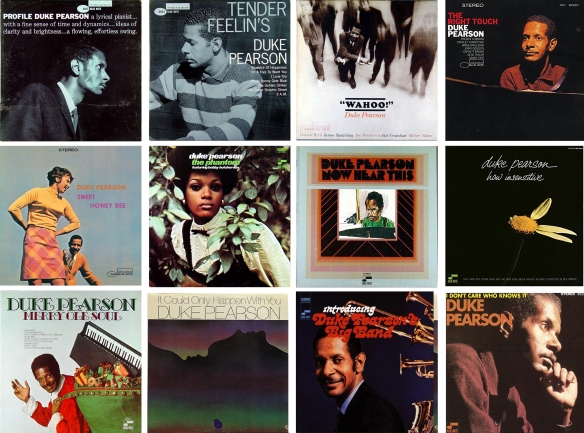 Aside from his Blue Note sessions, Pearson  also recorded with his co-led big band with Donald Byrd for Atlantic Records, and other titles which are less well known, for Fred Norsworthy’s short-lived Jazzline/Jazztime label (1961-2) , Prestige and Polydor. (For the record, my copy of Prairie Dog is pressed with recycled vinyl, <unprintable>)

Life is temporary and capricious gift, some get more of it than others, not what anyone deserves.  Pearson  spent a good deal of the latter half of the ’70s fighting the ravages of multiple sclerosis, and left us in 1980, age 48.

The music he left us with, however, lives forever.

Those unused to mixing with royalty, there are three Dukes you need to know: Ellington, Jordan and Pearson. All Music awarded “Wohoo!” album a coveted five stars: ” a truly wonderful advanced hard bop date, Wahoo! captures pianist Duke Pearson at his most adventurous and creative“.

Henderson is on fire, doubtless egged on by the magnificently strong line-up. It’s moody and modal., and every track counts. 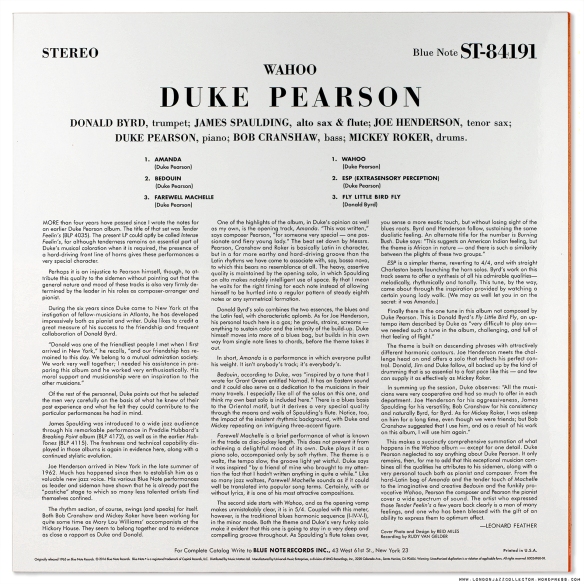 Fiendishly hard to find and expensive in its original release form, mono or stereo, this is one record that does actually justify the seller’s bait “Rare!” Popsike picks up the story, top 25 auctions still finds it above $200, up to $555. 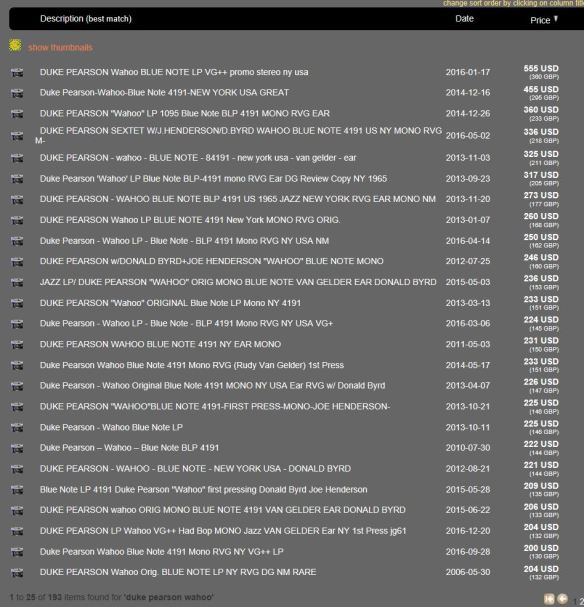 I have an original copy but it is bordering on VG, from the wrong side. However, if you can ignore the crackle clicks and pops, which is challenging!…listen, you get a sense of what an original Blue Note issue sounds like. It was included with my April Fool post, but I’ll repeat it here.

The British seller graded it as “VG/VG+”. whatever that means. You might as well grade a record as Fair/Ex, with Ex for the bits that don’t click and Fair for the bits that do. Nonsense.  However, in the Van Gelder edition,  Henderson’s harmonics will tear your heart out, I never got that experience before.  It’s sweet and beautifully engineered, bless you Rudy. Just a shame this copy was owned by a prize @ss who treated vinyl with disrespect. Perhaps life treated him with reciprocal disrespect.

Blogged back in 2012, a later Liberty reissue exists, the only copy I could find, not Van Gelder, possibly west coast pressing (label printing is later quality) there may be a Van Gelder edition too, possibly even a UA blue label, though not found. Why was the Division of Liberty release remastered?

At this point people will often look to the East, but the reason for Wahoo!’s scarcity becomes more apparent. “Wahoo!” was one of the few Blue Note titles not reissued in Japan by either King Records or EMI Toshiba.  There is no “artistic justification” for its omission from their re-issue schedule, Wahoo!  is one of the strongest titles in the 4000 series catalogue. There must be a more mundane mechanical reason: had something happened to the tape? Was there a licensing problem?

DMM’s can be very hit and miss, it varies from title to title, some are OK, very occasionally excellent, most are best avoided. The lineage to original Van Gelder tapes is broken, copy tape sent to France and re-mastered locally by French EMI engineers. No doubt there is a similar Capitol Manhattan DMM somewhere.

No problem, I’ll just buy the CD. Whoops?  I said I wanted to buy “Wahoo“, the record, not “Yahoo“, the company. (And no, it’s not doctored in Photoshop, that’s the actual asking price)

Over £200? For a CD? “It’s the blue cover, sir, it’s “insanely rare” you see”. Plus it is an early CD, may be there is something significant in the1995 issue date. Other sellers  are to be found selling CD copies for a bit less, though still large amounts for The Evil Silver Disk™.

The Heavenly Sweetness people in Paris have “re-issued” it on vinyl, however I believe these are merely CD stripped onto vinyl,  not something that gets any kudos around here. VINO – Vinyl In Name Only. Plus they didn’t respond to my e-mail regarding the source of the  Hutcherson Oblique title, which I consider poor manners for a country which prizes civility,  La Politesse.

The MM33 offers a genuine alternative modern pressing with genuine original tape/ mastering heritage, and without the cursed vinyl condition issues, at a considerably lower cost of ownership.

Generally I prefer the RVG original, a hairshirt choice,  and this is no exception. However as always the choice is yours, “availability” has a lot going for it, price can be a barrier to entry.  I think “Wahoo!” is an essential album in the Blue Note legacy. Whatever your budget and preferred medium,  every option is better than none.

Any thoughts on anything here, as always,  welcome.