The selection Crazy Jane narrowly defeated the more mainstream track On! due to the latter’s lengthy drum solo – a feature of many  ’60s recordings, an outbreak of instrumental democracy and fair play, everyone gets to solo, why not the drums?  I prefer the drummer to be “solo-ing” throughout, a virtuoso rather than beat-keeper, but I’m wary, some drum-fans might want to beat some different sense into me.

British jazz musicians main source of income was not from record sales, or club performance, but laying down background music for film and TV – that was over 50% of Lansdowne Studios main business.  However we have reason to be grateful that Denis Preston and others struggled against the tide of popular music to bring us good music, that was not especially popular.

The pick of EMI Lansdowne jazz out put was reviewed a few years back at LJC  with the Lansdowne sampler album, under the modest title The British Jazz Explosion (1966-9)  A reminder with a selection from the predecessor  Rendell Carr album Dusk Fire,  the track Tan Samfu (Rendell), if you want to make the connection and read the direction of travel:

Rendell/ Carr Quintet shows how far British jazz in the second half of the ’60s had taken new directions. Not a jazz songbook standard in sight, moving away from the usual jazz conventions of AABA structure, heads and solos, rhythm section down in the engine room, improvised virtuosity of the soloists. The writing is more structured,  a pictorial composition, storytelling, replete with literary allusions. One title in French: “Les Nieges d’Antan“, literary, not Voulez-vous coucher avec moi ce soir?   Garrick’s title Black Marigolds (marigolds are orange, no?) is a steer towards Indian Classical fusion, cerebral references. This is jazz charting its own course, rather than following that set out before.

Phase III doesn’t so much swing as target the regions “above the belt”. This may well be because recruits to the British jazz scene were more likely graduating from Art College than schooled in military marching bands, but that would be just a limey guess.

Cook and Morton put their finger on Ian Carr’s Miles-like touches on trumpet: “soft harmonic slurs, dramatic stabs and out of tempo fills”, but also the parting of the ways with the other side of the Atlantic, with his  “intense, highly literate vision”.

The force is strong with collectors of British jazz. Below, some of Don Rendell’s early EP’s and 10″ albums on Tempo and other Decca labels. Everyone  dresses up in suit and tie for record covers. Rendell even sports braces to hold up his trousers. The Mods were yet to come.

Rendell offers a bridge between the American old and the British new,  a polished jazz improviser who moves into the counterpart, opposite to Ian Carr, in a search for a very different New Land. Playing Phase III to a couple of friends, neither especially jazz aficionados, more prog-rock and experimental weird,   one commented perceptively, “it sounds somehow British, though I can’t say exactly why, but it does“.  The Rendell Carr Quintet earned themselves a very special place of affection  in the canon of British jazz: creative, original and somehow very British. 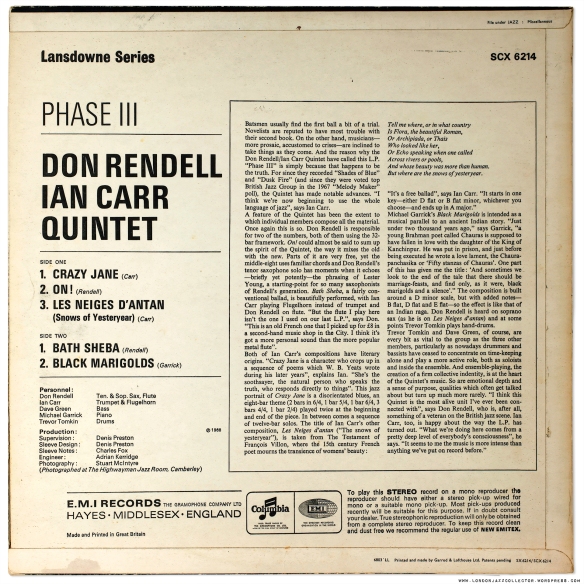 I keep looking at that cover. Ian Carr anticipates the hipster beard and the whole quintet are cast as intense, serious artists. The year Phase III was recorded I was following the herd, shoulder length hair and droopy moustache: suits and ties were strictly  for job interviews. Meanwhile, Liberty were getting into their second year of Blue Note ownership, and I wasn’t there either.  This music was my era, but not my metier, which was spent queueing up at the Marquee Club rather than Ronnie Scotts, watching  Cream, Led Zepplin, Jimi Hendrix, Jeff Beck, Jethro Tull, musically in an altogether different place, then, soon after, took a wrong turn, to Fusion.

To collectors for whom this reclaims their youth, I salute you, I’m only now just catching up. However catching is at a price. Popsike Top 25 auctions  for Phase III in the range  £185-£475. Ouch!

If the government Department of Media, Culture and Sport wants to do something useful (for a change),  they could announce a Help-To-Buy-Vinyl mortgage assistance scheme for would-be British jazz collectors, perhaps Shared Ownership of Dusk Fire or Shades of Blue.

I’ve taken to Rendell/Carr, I’m still a bit at a loss where to go British next. Backwards perhaps seems promising, reversing away from the looming ’70s fusion chasm , I’ve already been down there. Or on the other hand, I may just stay in Europe, figuratively. My wallet needs time to recover from this British treasure-trove outing.