A horizontal tasting: composers and arrangements

The oeuvre is the  “Jazz Workshop”, zeitgeist of 1956: the search for new directions. Post- swing experimentalism flowers briefly, doffing its cap to its contemporary classical music “brothers”. The fixed points here are the performers, the same group of musicians, recording in the same months, same label and same studio and engineers. What changes is the composer and their distinctive musical vision.

The performers, variously in quartet, quintet and octet:

This album for RCA Victor is the twin of the George Russell Jazz Workshop RCA LPM 2534. It is comprised of compositions commissioned by Hal McKusick from various composer/arranger leading lights of the day.

The line-up features the under-appreciated alto of  Hal McKusick, a sweet, airy voice somewhere between Art Pepper and Paul Desmond, where else?  Guitarist Galbraith adds a distinctively different voice scampering over the fretboard to echo the alto. Art Farmer’s warm lyrical solos, with his restrained but fat, fruity tone, is a delightful bonus.

The album itself is not in greatest shape, a chance find in a French flea-market, VG+ one side, less so the other, but it offers an inexpensive insight into 1956: jazz wondering where to go next. The tunes are generally no more than three minutes, so I’ve selected one for each composer.

The more you dig in, the less it is about soloist prowess than the composer’s melodic ideas, scoring various voices in different textures and rhythmic balance. In some compositions like Mandel’s classic Tommy Hawk, the tune is dominant, heads and choruses armed with  exquisitely-layered voices, solo-handovers, and rhythmic propulsion. In others it is about unpredictable counterpoint and rhythm, swirling geometry, bewildering changes in direction and unexpected liasons, forsaking the comfort of the mainstream. And then there is mainstream, big-band jazz dance swing with a modern twist, not out of keeping with Sun Ra in the same year

Mandel’s compositions litter the popular Hollywood screen, including M*A*S*H/ Suicide is Painless, and The Sandpiper/ The Shadow Of Your Smile and too many arrangement to mention. Tommy Hawk  was written for Chet Baker, whose rendition is one of the greatest West Coast jazz pieces ever recorded, here a great arrangement with a payload of great driving solos.

Miles Davis muse, Gil Evans could envisage and score work few else could even imagine, instruments as ingredients in baking a giant glittering confection, marvel at the result.

Associated with the arranging of West Side Story, baritonist Albam was for  a number of years director of the United Artists label Solid State, and enjoyed a long and distinguished career as composer, arranger and educator.

Behind the delightful play on words of the title is something of a romp. The scoring is perfection, a waspish driving beat, the brass section in lockstep swing, a spread of timbres. The lead altoist is often mirrored by the baritone, whilst the inner players of the section, trumpet and trombone, are placed at different intervals, major or minor, creating a dark inner voice. Sometimes in octaves apart unison , sometimes on melody or in counterpoint, and all high energy syncopating like hell, jazz dance. I’m not a swing-era fan but with a groove like this I could easily become one.

Jimmy Guiffre: One Score and Eight Horns Ago

Guiffre had a thing about trains and the motion, along with the natural flow of the river, like the beat came from nature not  man. A very quirky vision, but opening up great playing, always worth listening to. Giuffre is a great clarinet player and always a challenging vision.

George Russell: The Day John Brown Was Hung (part) selection cut short because surface noise too intrusive in the quiet passage that followed.

Russell led an exciting period of composition and arrangement in  late 50s early 60s most fertile New York jazz period, with numerous Riverside albums to his credit. This piece has bewildering counterpoint, somersaulting figures, with different instruments moving at different pitch and tempo, even direction. Masterful thinking, music more for the head than the feet, anything by Russell is well worth the ride.

Al Cohn
Of necessity I have skipped over the one composition from Al Cohn due to it suffering most from surface noise, and the very mainstream nature of the composition, less interesting.

One thing noticeable about RCA “Orthophonic” hi fidelity is the very low gain. Turning up the volume for the rip to reach optimal values magnified surface noise significantly. Probably not what the RCA engineers intended, but listening on 1956 equipment who knows what they heard. You have to switch off the sound quality and vinyl condition filters to dig into the musical content.

Though it was cleaned professionally several times, the tracks on side two suffered  from poor vinyl handling more than other,  hence the truncated George Russell track. No skips or jumps, as they say, but some crackle. Give me a break, it’s not bad for a sixty year-old, I’ve heard worse, lets see what you look like at 60. Great cover, by Bert Goldblatt.

But what is this? Jazz-loving owner of a fountain pen with blue-black ink at the ready, determined to improve the discerning listener’s insight into the line up for each of the short tracks. 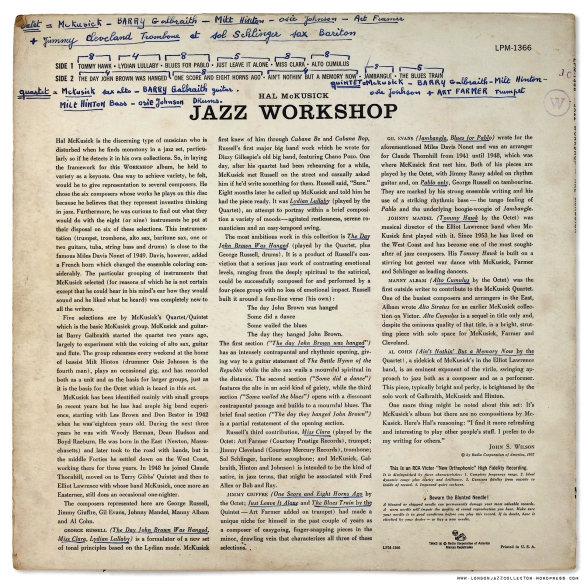 Interesting to see people’s desire to  add value to a recording, painstakingly annotating the liner notes as to which pieces are octet, quintet or quartet, and which musicians play in which formats, all drawn from the liner notes. The song-titles are underlined, despite being already italicised to distinguish them from the text. I guess it stems from a desire to be more than a mere spectator, to “participate” in the music and reinforce your own learning by repetition.

I do something different. I write what I think about the music, on a blank inner sleeve, which stays with the music without defacing the cover. Jot down the highlights, outstanding tracks,what the music is doing in each track, expressed in words not found on the liner notes, an aid memoire, perhaps to revisit at future dates.  Memory is fuzzy, recollections less so, but immediate reactions are always more insightful and of lasting value.

I’m curious, anyone else do anything as odd as me?

Getting into labels and artists over many years, I had neglected the bigger picture, musical directions, evolutionary forces, the experimental workshop. Having expected to sit and enjoy a Hal McKusick alto album, I found I had wondered into very different territory, helping appreciate the intellectual force of George Russell, the locomotive propulsion of Giuffre, the  brilliant arrangements of Gil Evans arrangements,  to disassemble the workings of a brass section in the hands of Manny Albam and Johnny Mandel.

Released in 1957, the McKusick Jazz Workshop album stands the crossroads for jazz, between what came before, and what followed. In the end, it didn’t follow the jazz workshop direction at all. In all but a few cases, the large-group jazz orchestra was economically unsustainable, and arrangers headed for Hollywood where their talents found more rewarding employment. The swing band handed over the baton to bop, and the small group format with its charismatic leaders emerged as the commanding genre for the next jazz decade. And what an exciting decade it was to be.