With a lot of attention here currently on Blue Note Liberty labels, I thought it would be a good to take a break and dip into some jazz closer to home, Europe, with a record I picked up recently, a dive into another time making great music. 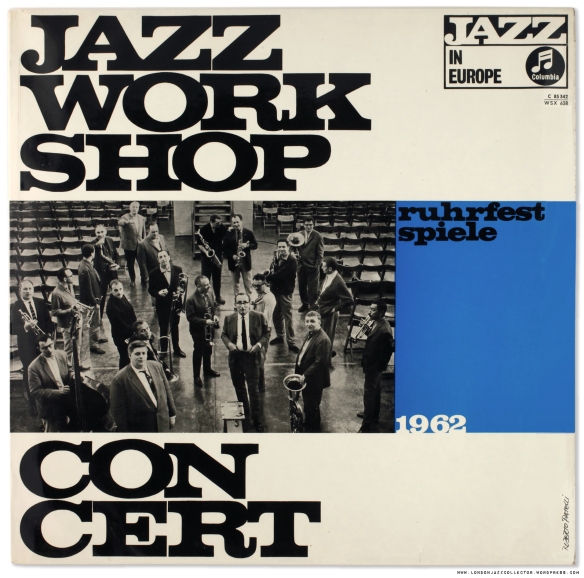 Artists: I’m  not even going to try to retype it: 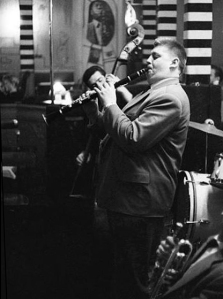 Who is Austrian  “Fatty George”, who plays such beautiful, mesmerizing clarinet lines, dancing on air?  One Franz Georg Pressler (1927 – 1982).

Pressler developed the idea of combining  Dixieland with Cool Jazz: influences of Bechet and Konitz shine through, and his band mates  in early days included fellow Austrian Joe Zawinul.

“Fatty” is good with me. No fat-shaming in jazz,  in England we had Brian “Tubby ” Hayes, America had Julian “Cannonball” Adderley,  go Österreich, go extra-wurst!

Leading lights in the workshop  “orchestra” are Friedrich Gulda, eccentric and iconoclastic Austrian pianist and composer who worked in both the classical and jazz fields. In addition to lots of Austrian and Swedish players unknown to me, Abba-jazz, Britain fielded Ronnie Ross on Baritone, USA altoist  Herb Geller, and Belgian harmonica and guitar (heard with Fatty in the selection) of Toots Thielmans.

The European jazz scene in the early ’60s found a lot of talented musicians needing to eat, and the jazz workshop idea brought many to the lunch counter. Greedy bastards. To Austria’s proud musical heritage of Amadeus Mozart and Johann Strauss, Jazz added Hans Koller, Joe Zawinul, and “Fatty George”. The wurstfresser didn’t get that shape without also putting away a few extra portions of Sachertorte too. Good for him.

The “Jazz Workshop” concept, also favoured by Mingus,  is not simply a big band outing, but leaves the door wide open to a combination of scored ensemble and improvised pieces, with many different voices, something of an art form in itself. This was a time for experimentation, Mingus recorded Jazz Workshops, Hal McKusick and George Russell’s RCA Victor Jazz Workshop outings offer exciting stuff, as well as Don Byrd and GiGi Grice ‘s Jazz Lab. Jazz was an adventure, with space above the collar as well as below the waistline.

As for Fatty George, I hadn’t heard of him before, but I confess a weakness for jazz clarinet, which is often wrongly associated only with old school  players from the big band swing era like Artie Shaw and Benny Goodman, not especially ” fashionable”. Phffft. It sounds pretty good here in 1962,  and a force to be reckoned with in the hands of modernists like Eric Dolphy bass clarinet, muscular Buddy de Franco or Jimmy Guiffre’s imaginative canvases.

Beyond the  staple jazz diet of tenor and alto sax, and without the saccharine sound of soprano sax (Mr Gorelick, sorry to interrupt your solo groove climax , but I have your investment broker on the line) clarinet is an instrument that lends itself to delicate flights of musical ideas. It can pierce the upper register, yet resonate in the lower, while inviting tremendous speed in athletic figures and grace notes with an emotional lever in vibrato.   I reckon his waistline gives him extra stability in the woodwind department, “Fatty George” swings like hell.

I would draw your attention to the fascinating detail of the performance and musicians in the liner notes, except for the fact they are unsparingly written in only German. One for our German-speaking readers. Anything of note, help us out.

Columbia Germany is not a label I think I have ever seen before. Most of my search enquiries about Columbia Germany likewise came back in German, so I will leave it at that. The Columbia name has been bought and sold countless times, different countries had alternative identities at different times. There are over  128,000 entries on Discogs under the name “Columbia”, and open warfare between editors over the correct identification of the label, especially over EMI Columbia and the Magic Notes symbol, Sample (Discogs thread):

“A few months back, ( NAME REDACTED) went on an edit spree changing quite a few European Columbia and EMI Columbia releases to something he called ‘Columbia Magic Notes’ which seems to be his fairly unique combination of the Columbia label and their tag”

“This is stupid and really not intelligent. We must be discophile, and not some stupid people who talk about things they do not know.”

At the moment you have not, and every other piece of tangible proof offers up a label called Columbia.”

Crikey, I thought Discogs peeps were just happy friendly record lovers.  I have enough on my plate with Division of Liberty typesetting, I’ll butt out.

I think it was the title “1962” that first attracted me to this album, particularly since I couldn’t understand anything else written on the cover.  That was a good jazz vintage year, which I visit often in my Chronomaster  drophead coupé Time Machine.

1959 remains my favourite destination, though 1963 has a lot going for it if you like your music a little further out. By 1964, hold on tight, expect a bumpy ride, with occasional turbulence from avant-garde or soul jazz  . If you find yourself drifting  towards 1970, drop a cog and speed through jazz rock altogether.

Just remember to fill up the tank before heading for home-time. You don’t want to find yourself stranded in the ’80s!  The Chronomaster carries a survival outfit for such an unlikely event:

“In case of landing in the 1980s, underneath your seat is an emergency spandex metallic outfit,  big hair extensions and a set of platform shoes,  for not attracting attention, while waiting for your Time-Rescue call out. We also carry shoulder pads for ladies. Thank you for time-travelling with Chronomaster.”

For European jazz, the Cologne scene was very productive, focussed around Gigi Campi and the Clarke Boland Band alumni such as Johnny Griffin and Sahib Shihab,  and Musik Produktion Schwarzwald (SABA, then MPS label 1968+ ) with studios at Villingen, Schwartzwald. The Jazz Festival timetable included Donaueschingen also in the Black Forest (Archie Shepp) , and Baden-Baden. Where Rhur FestSpeile fitted I had no idea. Whilst listening to Jazz from Europe, I recommend a change from the single malt, may be down a few steins, send out for some smoked sausage with sweet mustard.

In a ’90s interview by the NYT, guitarist Jim Hall summed his  experience touring Europe:

“I really like the people here,” Mr. Hall said. “They are knowledgeable, and after a show they come up to you and ask you questions about things you played when you were 25 years old. There’s a respect here that I like. It just makes you feel good.”

Having raised a little controversy, I’ll carry on digging into the Blue Note Liberty years. Looks like it might take some time, so I’ll carry on. If you have any thoughts on jazz in Europe, now might be a good time to add them.