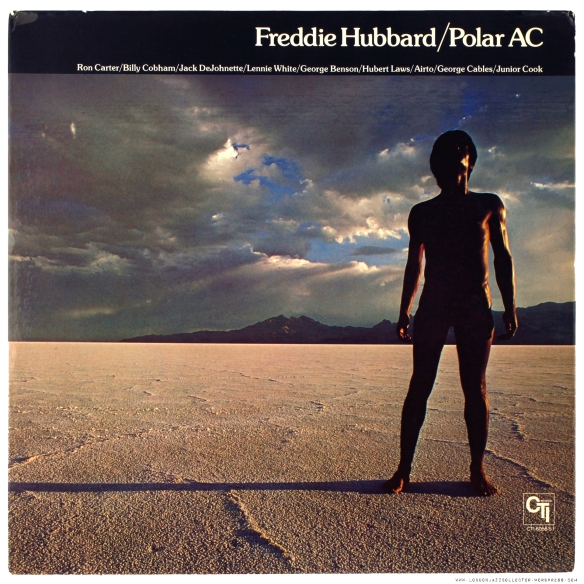 Sorry Don Sebesky and Bob James –  faced with the tracks featuring twelve violins, six brass and four woodwind, two hens a-laying and a partridge in a pear tree, I’ve gone for the Sextet format with Son of Skydive. Less is more!

Complexity is not of itself musicality. Less is more.

Polar AC comes towards the end of the series of Hubbard CTI albums. Try as I can, the arranger’s work is not for me. Scoring twenty to thirty instruments may be a mighty artistic endeavour, but if the end result is indigestible slush, it is not worth the candle and I beat a hasty retreat into more sparse territory of the sextet.

I can’t improve onWhitney Balliett’s definition of “Jazz”:  “The Sound Of Surprise”. There is no surprise in orchestration, merely superficial embellishment of what stood well enough in its own right, now weighed down with excess baggage.  Creed Taylor was a talented producer, but his sortie into orchestration with Sebesky seems ill-judged. Charles Mingus and George Russell could pull off exciting complex arrangements, Creed Taylor/Don Sebesky could not.

Hubbard’s trumpet is rich and warm, Junior Cook (if that is indeed him) is a tasty tenor, schooled from his work as Horace Silver’s brass pointman (and a passable Mobley sound-alike on some albums). George Cables provides wrap-around electric piano blanket, which on balance I prefer to Hancock’s uneven wresting with the electronic keyboard on some of the earlier Hubbard CTIs. Ron Carter never puts a foot wrong, and even Lenny White seems to have found a more relaxed groove by now.

To chill-out, Polar AC is pleasant easy-listening, I have heard far worse.

The cover to Polar AC is “iconic”, a striking figure in landscape, instant recognition over thirty or forty years. The gatefold however is another matter.

It is said there are always at least three people in a portrait: the subject, the photographer, and the viewer.  I like to see Freddie playing, I’m less sure I want a face-to face relationship, we hardly know each other. The lighting is simply… dreadful. Creed Taylor may have got Van Gelder engineering on board, but he could learn a lesson or two from Francis Wolff on portraiture.

My reading is Freddie has been captured raiding the cookie jar, in a cupboard, seen from the point of view of the cookie. He deserved better.  (Freddie, that is, not the cookie. The cookie right now is toast) 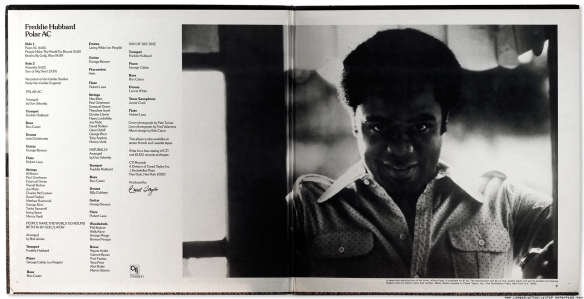 White label radio station copy. It may say “stereo” on the label, but my copy is most definitely mono, whatever the label and cover says. It sounds very fresh and lively, and a lot better than some of the other commercial release copies in my stash of Hubbard CTIs.

In order to be VAN GELDER stamped and “mono”, it stands to reason that it must be an alternate master to the commercial stereo release. I don’t have the ability to check the runout of commercial release stereo copies – perhaps you have one and can check – but I notice that both side A and B are  A-2 and B-2 matrix codes. The Van Gelder custom is A = first cut, A-1 a recut, and A-2 a third cut.  Strange, but anything is possible in the world of Vinyl.

I mentioned in an earlier Hubbard CTI post, Red Clay,  there was a story attached to my Hubbard CTI collection.

The Hubbard CTIs were the target of my attention, but in England, the Hubbard cupboard was bare. Despite seeing legions of them in  record  shops a few years ago,  no-one seemed to have any for sale. Many copies were available on Discogs but in the hands of US sellers.

I tracked down the best copies I could find, all in the US, and diligently made Discogs purchases, five separate transactions, five different sellers. One after another the purchases were initiated, and I was delighted with achieving a full set at no great cost. All I had to do was…wait.

So I waited. And waited. None of the records appeared. Then one day, a Discogs seller contacted me. Did I know there was a discrepancy between the purchase order address and the delivery address?  I had them addressed for delivery to a friend of a friend in Kansas, but checking the order I found I had miss-typed the address for delivery, two numbers in the house number were the wrong way around, several hundred houses apart.

I checked on Google maps, and by chance and unfortunately for me the house for mis-delivery definitely existed, a valid address.  US Postal system claimed the LPs were all delivered to porch or front of house as addressed . I could even see the house online, even the front porch. It just wasn’t the house where they should have been delivered. My goof, I sent myself to the dog house.

Another month went by, and..nothing. Records not returned to sender, disappeared to the mystery address, perhaps now a new fan of Freddie.

Then, I had a brainwave (LJC recommends The  BrainWave Generator ™ pictured left)

I typed a letter to the “incorrect” address in Kansas, explaining the circumstances, and gave the correct address the records were destined for, and posted it First Class with a hope and a prayer,  from … France.

What then happened, some weeks later, all the misaddressed records turned up at the correct address. No acknowledgement, just the right thing done, all five Freddie albums accounted for.

Eventually the CTIs found their way back to England via my personal courier service, whose initials A.C. were, by a spooky coincidence, predicted in the title of this Freddie album over forty years previously, Polar AC.

A small miracle. If you are out there – Thank You, Kansas!