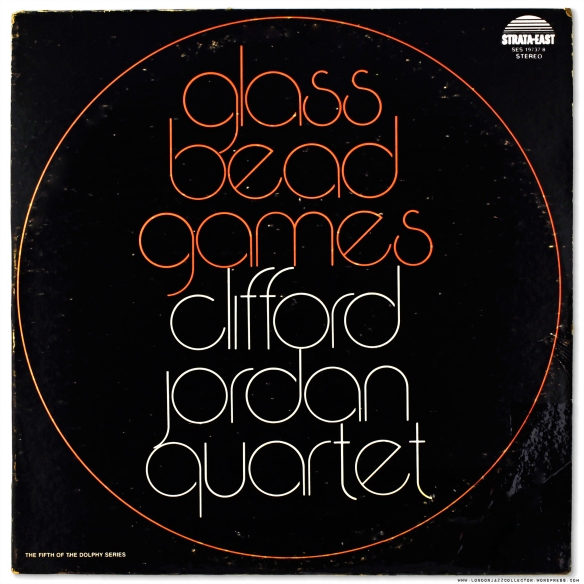 Fifth part of the Strata-East Dolphy Series, Glass Bead Games is arguably the crown jewels of the Strata East movement, an amorphous genre that treads an unusual path between post-bop, 70’s avant-garde and spiritual jazz, with a groove.

Several tracks are portraits dedicated to icons of a recent generation – Powerful Paul Robeson, Cal Massey, John Coltrane, Eddie Harris – stylistic references but played with its own intelligence and respect. The quartet’s take on Eddie Harris (selection) caused me to think again about Electrifying Eddie. Not sure if I am ready yet for electrically amplified saxophone, but who knows.

Jazz Times articulates well Clifford Jordan’s fullness of expression and distinctive voice: “No better representation exists of Jordan’s narrative gifts (on Glass Bead Games) – his lyricism, wit, mastery of changes-playing and vocalized tone, broad and burnished at all tempos and harmonic contexts, equally comfortable deploying the bright colors of the upper register and the dark hues of the tenor’s bottom.” I would add only that his execution offers the right amount of unpredictability, always fresh and interesting.

One for any font-aholics out there, the typeface featured on the front cover is apparently called Wexford, designed by Richard Schlatter and released in 1972, according to the wonderfully informative Fonts In Use site.

“Wexford was part of a wave of similar typeface designs released in the late 60/early 70s that were all built on a very circular, strictly-geometric structure.  Specifically, it is Wexford Light that is used here, set in the “tight but not touching” style that was ubiquitous throughout the 1970s.”

The gatefold interior throws in a spiritual abstraction in a shade of red that I would call  “indescribable”, where the power of words fails to rise to the occasion, maybe  terracotta or tangerine? 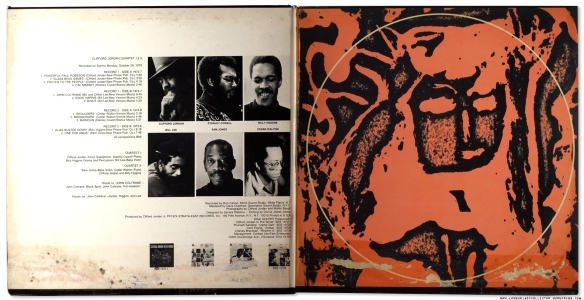 Strata East are solid performers on the turntable – good dynamic and tonal range and an unfussy centrally-focussed stereo presentation that helps concentrate on the music rather than the theatre.

Just a few weeks after writing about the Clifford Jordan live album Night of the Selmer Mk VII on Muse , no-one was more surprised coming face to face with an original copy of the studio album on which the live set was based, the sought after Glass Bead Games  original double album.

The front cover is a little tattier than that shown, which has had the benefit of a little repair in Photoshop which I can not  unfortunately do in real life. (When Life was first created they forgot to include some essentials, like an Undo button, and a Magic Eraser. Or perhaps just a Reset button). But I figured, why would readers want to look at a torn cover?

Glass Bead Games is one of the few albums whose Discogs entry actually contains some collector reviews.

“This is the best album on the label in my opinion – Cliff kills it. A complete jazz album that captivates you from start to finish. I paid an arm and a leg for this but am glad to have it on wax. “

Indeed, I could have written that myself, though I didn’t. I too paid an arm and a leg for this – but looking on the brighter side,  the replacement prosthetic limbs are functioning well.  And it’s only money. You can’t play money, it doesn’t sound any good. It is relatively easy to turn money into records, the trick is turning them into the right records.

Glass Bead Games is one of those.