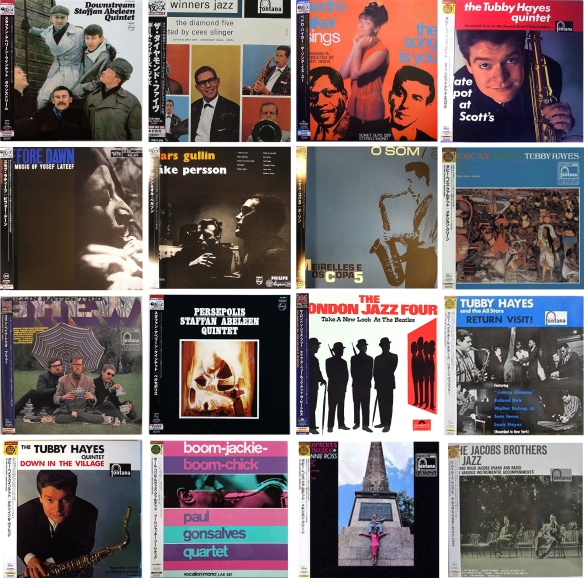 The giant Universal Music Group own the recordings of Capitol (including Blue Note), Decca UK, EMI (including the recent Rendell Carr Quintet reissues), Impulse, Verve, Mercury and Philips (including Fontana). The suits at Universal own it all,  apart from the Prestige and Contemporary catalogues, which are owned by the suits at Concord Music Group, following their 2004 acquisition of Fantasy, and Atlantic, which I believe remains buried in the vaults of the Warner Brothers Group.

Modern Jazz does not register even the briefest flicker on Universal corporate dials.

“Follow me down to the crypt, Igor, we have work to do.”

Every now and then a clutch of titles escape the vaults because entrepreneurs have beaten a path to Universal’s door, and prized this precious music from their well-manicured fingertips. Gilles Petersen’s Impressed  volumes, and Gerald Short’s Rendell Carr box-set are an example of what is possible given access to original tapes, which have been well preserved, and the right engineering skills.

For a good number of  ’50s ’60s recordings now owned by Universal the only show in town has been unofficial unlicensed editions (CD-to-vinyl transfers), Scorpios and like, records in name only, and The Evil Silver Disk™. Of other modern vinyl reissue labels, there is a certain opaqueness as to sources, such as Pure Pleasure/Speaker’s Corner Records claim to be“Mastered From The Best Available Sources”, which could mean just about anything, purposefully opaque.

Between 2004 and 2009, something unusual happened. Universal Music K.K., Tokyo, Japan, subsidiary of the giant Universal Music Group,reissued a number of extremely rare vintage jazz recordings from the ’50s and ’60s, in their UCJU 9000 series –UniversalClassics &Jazz UK. This included, uniquely, several British titles of “holy grail” status, many from the Fontana catalogue,  as well as a number of classic though less rare American titles, and some scraps from ’60s Denmark, Brazil, and other foreign parts (wrong side of the English Channel)

UCJU-9000  were “licensed”  issues, if licensed means anything, because they own the copyright, though many are out of copyright (scratches head). As well as legal rights, they physically possess many if not all actual recordings, but may not have actually used the original tapes as source, if they still exist, because of industry gas-lighting that having the best engineers re-mastering from digital sources or copy tapes is just as good (or just more convenient, they’ll never know).

The point is not whether the reissues are better. I have A:B’d many hundreds of reissues against originals. I have yet to hear one that sounds better, though exceptionally I have heard just a few that sound near-indistinguishable, in each case definitively sourced from original tapes.  In my experience, most reissues fall lamentably short.  The question is whether the UCJU  reissues are good enough, close enough to the authentic experience, and there is the trade off between  authenticity and availability. Luckily we have a shoot out for you.

But first, let’s climb on board the LJC jazz helicopter and survey the musical terrain. I’ve a hundred seats booked, you are invited. No time to lose, buckle up.

Seven separate sub-series share the “UCJU-9000” catalogue number (links copied over from Discogs) of which  [2] and [3] offer reissues of some holy grail recordings that are not realistically available or affordable in their original release edition.

[1] “Jazz The Best” LP Collection
“Jazz The Best LP Collection” / white on red logo.
UCJU-9001 to 9043 (some numbers not used). Around 40 titles, various classic artists including Parker, Coltrane, Bill Evans, Clifford Brown and many others too numerous to mention here. Mostly these are replica Impulse gatefold titles, with some Verve, Philips and others. Coltrane is well represented. Just a few examples from this series:

Meiban LP Hyakusen / en: “100 Selected LP Masterpieces” / yellow/white on black logo. UCJU-9064 to 9083. This series includes a lot of ’60s iconic pop and rock, a mixed bag – Eric Clapton, The Police, Rolling Stones, T-Rex, and just a dozen or so jazz already issued in an earlier sub-series. There’s a hundred of them. I expect that is why it is called the LP 100.

According to Discogs contributors, these Japanese reissues are themselves rare, having been pressed most around 800 copies. They will still  set you back a tidy sum according to title, still in two figures, unlike their original counterparts, which are often in three figure territory, some even heading towards four.

Over the years, during every day collecting, I acquired a handful of records from the UCJU series without realising what they were, without any recognition beyond “oh, it’s got an obi” , and without any understanding that there was even a “series”,  or who issued them. Then, just recently, the penny dropped, with the help of  Discogs, who have helpfully connected the dots.

How do they stand up to each other? Let’s proceed to a shoot-out. The subject is British tenor hero, Tubby Hayes, recording a session in New York with Roland Kirk for the British Fontana label,  The rips are here for you to decide, original Fontana versus Universal OCJU.  I’ll tell you at the end what I think, but first it’s your call. Listen. 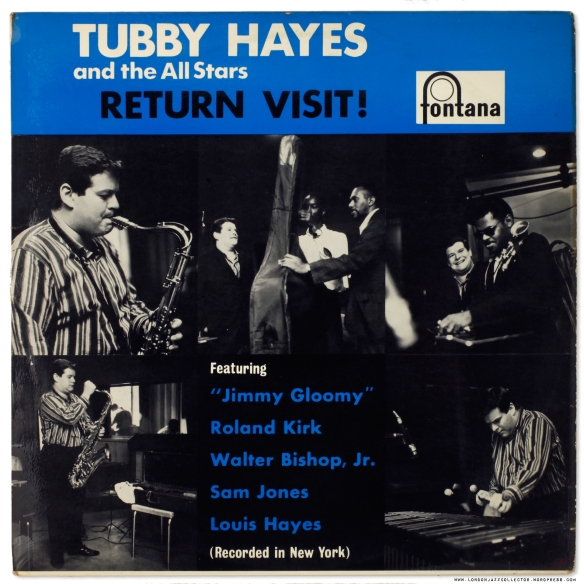 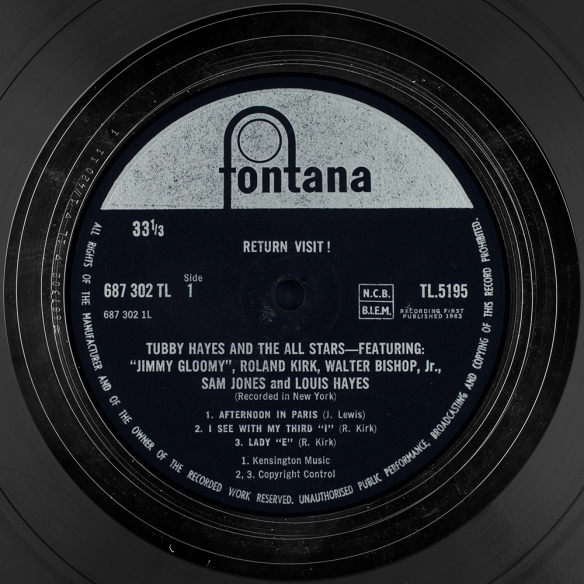 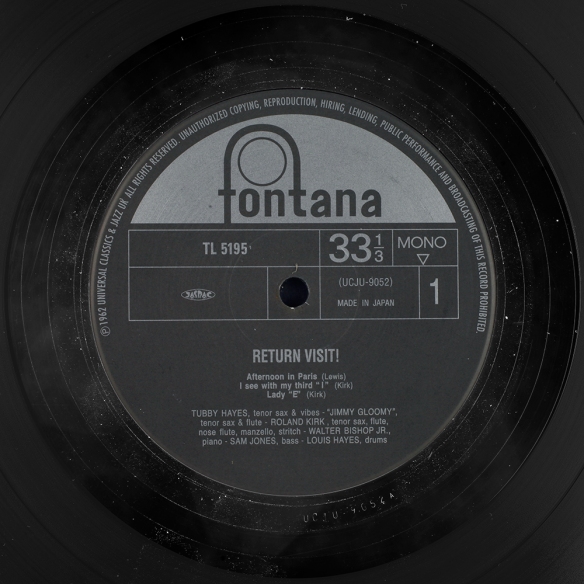 The same audio components, merely difference in source,  each within the same limitations of MP3 at 320kb (the highest quality WordPress support) and the limitation of PC or phone processors and speakers. These factors are limiting, but at least a level playing field. My verdict is based on listening on a full audio system, that really shows the difference.

I have no knowledge of the source used in preparing these reissues. Maybe they got the Fontana original tapes, perhaps sent an engineer to London, maybe they got a flat transfer copy tape, maybe a high resolution digital file, maybe they dug up the original musicians and reanimated them to play live in a studio.

If they thought sources mattered they would say what they were. Silence suggests they don’t. But, in the end, only results matters, not means.

Here’s what I think:

First, check out Tubby, who takes the second solo, starting at around 3:00 into the track after Moody.  James Moody is proficient,  very good, but Tubby has acrobatic prowess, propulsive drive, and a need for speed with perfect articulation,  great! We can beat you at your own game guys, go Tubby Go!

1. Original 1961 Fontana original: fresh, exciting, sense of presence, musicians in the room, it has a natural acoustic  tonal and dynamic range, draws you in to listen. I can even smell Tubby’s socks, which he omitted to change after the flight to New York.

2. Universal Japan 2006:  Bass is a little soft, upper frequencies muted. Overall, a synthetic, rather sterile transfer, veiled and at one remove from musicians in the room. Unfortunately, it sounds typical of many Japanese reissues from this period.

I recall acquiring this Universal copy some years ago, rarely played it, somehow it seemed unexciting, couldn’t put my finger on why, but that is the difference. When I mount the Fontana on the turntable, suddenly the arms on the wall-clock start to spin in reverse, faster and faster until it is 1961. Tubby is in awe, our plucky little Brit standing next to Roland Kirk and all the greats. The band is a little stiff, insufficiently rehearsed, and the atmosphere is competitive. Tubby has to showcase his skills, which he does outstandingly, though unfortunately also having to prove his multi-instrumental prowess with vibraphone.   Jimmy Gloomy (James Moody) sounds pedestrian in comparison, no wonder he is Gloomy. Kirk is unflustered, professional, master of the universe, which may not be the same as ours.

You can participate in the session, because “you are there” in the New York studio, a Fontana visitor pass around your neck. There is that  difference. For me, the Japanese reissue of this title is lacklustre. It deserves to have been better, could have been better, but someone settled for less. On the positive side, original Fontana is near impossible to find and fiercely expensive if you do. Universal Japan around a tenth of the price, and found more readily

Other titles in the series may fare better, but an A:B of another Tubby Fontana title (“Down In The Village”) vs UCJU  yielded similar results. The Gonsalves Boom Jackie UCJU title offers a much more muscular presentation, though I have no comparator, always sounds great. A few crumbs to go with, you have to make your own choices.

There are a few titles where I would be happy to have the UCJU because it is impossible to source an original that is affordable, and this is great music. Of the more obscure artists, Steffan Aberleen Quintet and  Meirelles e Os Copa 5, are of cult status. But who were the Jacobs Brothers? The Diamond Five? The Colin Bates Trio? Perhaps obscure for a reason. We need to unlock more secrets from the Universal vaults.

If you can add anything to this story, have experiences of the UCJU Series or comments on the Shoot-Out, or indeed anything remotely relevant, the floor is yours.

21 thoughts on “Rare vintage jazz issued in the UK, re-issued in Japan: the Universal UCJU 9000 series”