Selection: Taboo (to sooth your furrowed brow as the mystery unfolds)

Duke’s playing owes much to Wynton Kelly, as probably many in his day, but with more lyrical emphasis than rhythmic. The tune are standards mixed with some of his own compositions, the presentation is conventional piano with supporting rhythm section, nothing ground-breaking, but attractive, often very pretty reading of the songs. Pearson’s talent is showcased in more complex line-ups with his later albums like “Wahoo”, “Sweet Honey Bee” and “The Phantom”. Nevertheless, Profile remains a highly collectable album.

Pearson relinquished his management role with Blue Note on the entry of United Artists. However he was diagnosed with MS, and finally left the stage, in 1980, at the age of only 47.

One of the early 70’s “undocumented” Division of United Artists facsimile Blue Note series. ( Cuscuna/Ruppli Blue Note Discography make no mention) Most of this series are mono, a handful ill-judged hard-panning stereo. The covers and labels are careful reproduction of the original, aside from the corporate identity of United Artists on the label. The United Artists engineer initials: NB. 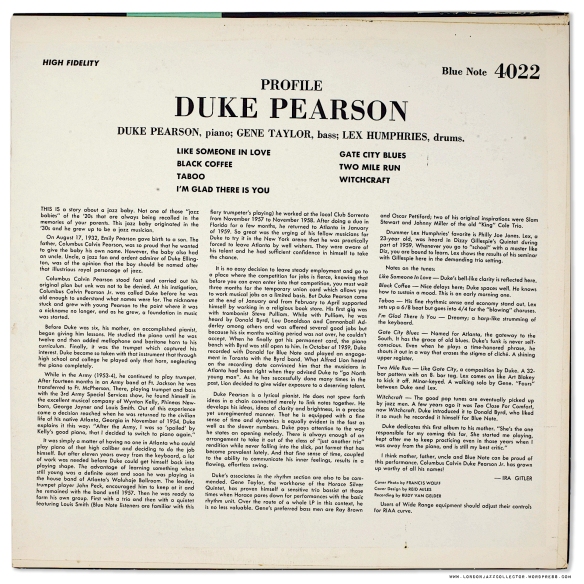 My copy of 4022 is a straight early ’70s Division of United Artists Blue Note reissue, no mystery about that. However it is a segue to a real mystery, sent to me by a reader, Brad.

Brad has a copy of 4022 which has the chronologically impossible  feature of an RVG stamp one side, and VAN GELDER   on the other, original 47 West 63rd labels, but no ear. In short, a split-personality Van Gogh!

Discogs has no such entry for a Liberty issue, however the mystery surfaced obliquely a few years ago, courtesy of our friends at Jazzcollector (You will recognise some of the commenters, Joe L, Andy and DG mono, stand up, take a bow, 2013, a good vintage.)

Brad sent me pictures of his labels of 4022, 47 West 63rd’s. The mere sight of W. 63 labels (in use 1957-61) has been known to send collectors into a delirium, checking the available balance on their credit cards.

and the back cover, ostensibly the real deal, catalogue number in large friendly letters at top right, and send for – 43 West 61st address – at the foot (Profile was the first title to carry this new and long-running address)

He spelled out the particulars thus:

Selection 2: I’m Glad There Is You

To begin, let’s have a quick look at the original 1960 release labels of 4022, (courtesy of Discogs). Note deep groove both sides. I’ve overexposed the runout in the label pictures. Side 1 bottom left you can just make out an RVG stamp. Remember that, it’s important.

Elementary!  The key to all this is the Side 1 matrix suffix  A -1

When this recording was first mastered by Van Gelder, in late 1959, his stamp was RVG. The record was released in February 1960 .  The original pressing would be RVG stamp both sides . The VAN GELDER stamp did not appear until over two years later, in Spring 1962.

For reasons that are not known, Van Gelder re-mastered Side A, (possibly both sides), at some point after Spring 1962 and any time up to July 1966, during which time the VAN GELDER stamp was in use. We know at least Side A was re-mastered because of the -1 suffix, which was how Rudy annotated a subsequent matrix to keep track of versions – original mastering, 1st re-master (A-1), even 2nd re-master has been seen (A-2).

Possibly Rudy wasn’t happy with the original master, possibly it was accidentally damaged, perhaps a repressing was planned, but never happened. Though Van Gelder will have recorded the session to two-track tape, he never got around to making a stereo master either, which was first issued in stereo by the Japanese decades later.

In mid 1966, Blue Note Records was sold to Liberty, who set about reissuing the Blue Note catalogue to help monetise their asset.  Liberty acquired most if not all Rudy’s metal-work, and stocks of  previously printed labels and covers in the company inventory. Importantly, Liberty also acquired  a large quantity of the last printed inner sleeve, “27 Years”, which they used up as inner sleeve in their first wave of reissues, before printing their own Liberty inner sleeve.

All-Disc Roselle NJhad been tasked with these early Liberty repressings, hence the absence of the Plastylite ear. When it came to metal-work, Liberty had access to Van Gelder’s acetate/mothers/stampers, which included an unused  re-mastering of 4022 Side 1.   All-Disc chose to use Rudy’s later re-master 4022 A-1  metal for Side 1, with its VAN GELDER stamp, and the original master, with its’ RVG stamp, for Side 2

It’s an odd one, but the way this story fits together is the only plausible explanation. Many of the essential details, such as the Van Gelder stamps and matrix codes,  were omitted in the examination of the record for sale back in 2013.

Mysteries solved while you wait.

Goodness! $777. Not bad for a Liberty pressing, with an “original W. 6rd label” – worthy of Moriarty.  It’s a trick worth remembering – original labels, just not stuck on an original pressing.