Playing catch-up, I somehow missed posting first time around this title, more Oliver Nelson on Impulse, More Blues….and the Abstract Truth AS-75. I’m not sure what “Abstract Truth” means in this context, but it sure sounds intellectually impressive, so let’s have more of it. Lights! Camera! Abstract Truth! ..and…Action!… 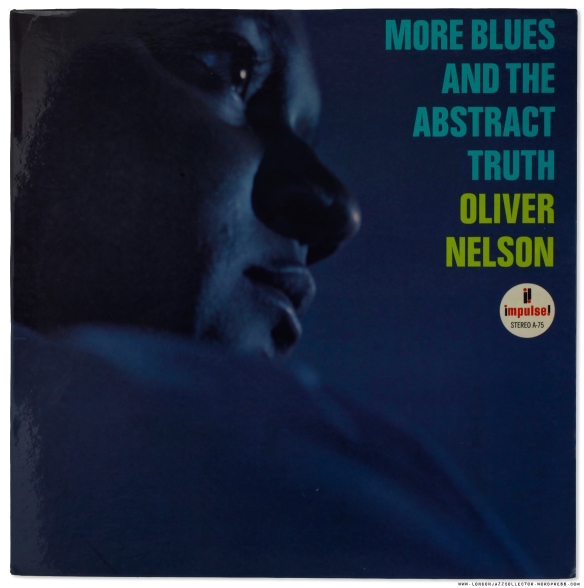 Billed as a follow-up to Nelson’s 1961 triumph The Blues And The Abstract Truth, (Impulse A-5, including Bill Evans!), it doesn’t quite scale the same heights, but it is a thoroughly listenable offering, which has its moments (if not Stolen Moments). Ben Webster, Phil Woods, Thad Jones and Pepper Adams add their distinctive voices to the ensemble, with Nelson’s arranging skills well on display. Mixed in with the jazz heavyweights are relatively unknown and rising stars Roger Kellaway (piano) Phil Bodner (tenor)  Daniel Moore (trumpet) together with the well-seasoned hands of Grady Tate and Richard Davis.

My selection is the sassy-brassy romp, Theme For Mr Broadway. “Mr. Broadway” was a 13-episode CBS adventure and drama television series, shot on location in New York City, aired in 1964, with music and theme written by Dave Brubeck.

A welcome change from highly-paid lawyers, the series was based on the misadventures of the clientele of a highly-paid PR executive, Mike Bell – played by Craig Stevens, a highly-paid TV and Film actor best known for his cool laid back and no doubt highly-paid private eye, Peter Gunn (1958-60), music by highly-paid composer/arranger Henry Mancini. The only poorly-paid people here were the TV show viewers.

Mr Broadway was aired between September 26 and December 26, 1964. The session recording two Mr Broadway tunes for Impulse was held on November 10, 1964, smack in the middle of the TV series on air. Coincidence, or outstanding product placement? Jazz on the record turntable , and jazz on the TV screen, all from the Blue Note and Impulse years. Strange how  some music has lasted, to this day still fresh, while its contemporaneous entertainment hasn’t.

There is always a twinge of excitement when laying hands on a laminated Impulse gatefold, often followed by a large dose of disappointment on finding the record inside is a much later 70’s issue. The same gatefold cover usually spans both the first and second Impulse issues, as here. It looks very good. 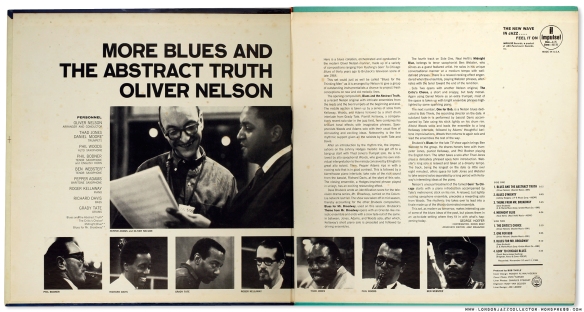 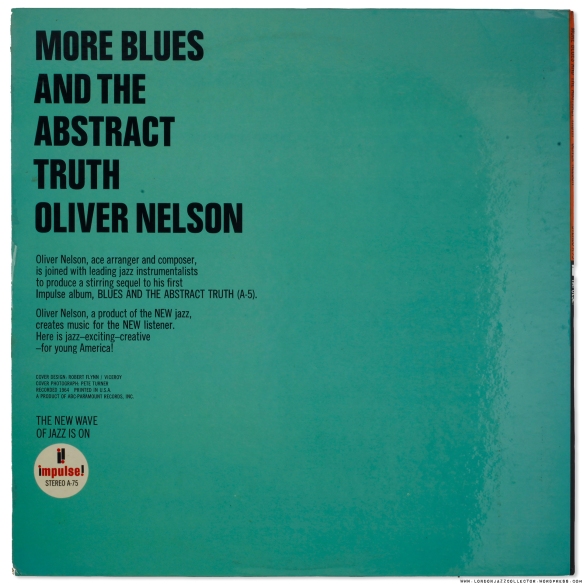 The first stereo issue labels are of course orange/black rim (1964) which I don’t have.

There is precious difference to my ear between a first and a second issue using the same Van Gelder master and metal. A big difference of course to the First Pressing Fundamentalists, who have their own values.

I have both the UK EMI mono and stereo “1st UK Issues”  and they both sound pale in comparison to the Van Gelder sourced master. First pressing doesn’t include first British  pressing, unless original metal used, which, in the voice of Professor Henry Higgins to Mary Poppins –  ‘ardly ever ‘appened.. .

Speaking of England, I missed out on last weekend’s Record Store Day, with its Resonance Records release of Bill Evans in England – 1969  (Live at Ronnie Scotts). It was raining, and long queues had formed outside my Soho record stores, on past form, dealers waiting to relist the items on Ebay. This  dampened my enthusiasm. Anyone any thoughts on this Evans release? Was it worth a half hour queuing in the rain for?

As a footnote, thank you for helping LJC reach my next milestone, four million page-views, any time soon.