Wally Trautgott re-mastered a reissue for the Capitol Connoisseur series back in 1995, which happens to be the copy on my shelf. Wally has his fans, though I am minded to recall the controversy about the Connoisseurs, that they invoked the use of digital delay lines during mastering, which effectively turned the original tape into a digital copy (CD,) which copy then became the signal source for the new master. Judge for yourself.

Interesting to compare the 1980 LT series, but I don’t have it. However a Seventies UA vs Tone Poet comparison  will appear on another  title shortly. The Connoisseur sounds a little congested to me. You might have another opinion. I suggest you play just the opening notes on the TP, then on the Connoisseur. You can hear immediately the difference in soundstage.  Instrument location is totally different.

Shorter, 1965, at the height of his creative powers, Hancock, Chambers and McBee, post-bop with an emphasis on Shorter’s austere compositions: economical, moody, sour, misty, beautiful. Penelope is a wonderful ballad, turn down the lights, open your choice of poison, and wash away the dirt of today. Does it for me.

This recording took place in the turbulence of multiple social and political conflicts: War on Poverty (Hands Up, hand out!), the Cold War, the Space Race, the Vietnam War, the Anti-War movement, the Sexual Revolution (we can have it all) , the Women’s Movement (hey, back off, buddy!) ….(lack of) Civil Rights, the rise of counterculture, psychedelic drugs, and long hair.  Never was there a better time to be – a cultural observer, from a safe distance.  None of which impacted on the War against Dull and Boring music,spearheaded by Blue Note.

I noted in my earlier review and I will repeat it here for the benefit of new readers, why this was so special a time:

“Modern Jazz musicians came mostly from modest, unpromising even no-account backgrounds, some schooled to repay their military service. They started young, and grew their talents by hard practice.

They were tested through a ruthless process of natural selection by which only the best were pulled up on board. No-one got a place in a Miles quintet or with Blakey’s Jazz Messengers, a contract with Blue Note, Prestige or Impulse  because of their family connections, because they were a celebrities son,  to make up a diversity quota, or because of their looks. The only ticket of entry was the ability to play better than their peers.

The result is music born of extraordinary highly concentrated ability: ability to create music with spontaneity, energy, that swings, that excites, that explores, that satisfies, that communicates emotions, that dazzles our listening senses.”

I stand by that statement, written several years ago, it remains my explanation why modern jazz of this period is musically so special, ages well like fine wine,  and is to be found in the grooves of Etcetera, and among many other records issued in the 50’s, 60’s and early 70’s.

When Blue Note released their “Tone Poet” series earlier this year, a lot of people asked what I thought of them. My initial reaction was that I already had most of the TP Series albums in their original release form, or they were by artists that didn’t interest me (Ike Quebec, Stanley Turrentine, Bobbi Humphrey, sorry).

Unlike the familiar Music Matters reissues of the classic Blue Note 1500 and 4000 series, what is different about the Tone Poet Series  is the focus on recordings by Van Gelder made for Blue Note in the Sixties but not released until the Seventies, by United Artists, thanks to the diligence of Michael Cuscuna.

When a couple of titles turned up which did interest me, this Shorter album, and another by Donald Byrd (both of which I had in earlier form) it seemed a good opportunity to test the waters. The interesting question was how Tone Poet Series compare with those UA  Seventies issues. Can Joe and Kevin bring something new to the party? I think they have.

We have the luscious wide stereo stage of Music Matters productions – music beyond the speakers rather than compressed between them.

The vinyl is inky-black silence, a pleasure in itself compared with the normal daily struggle with surface noise issues

There is no original Plastylite baseline for comparison, something that troubled me with some Music Matters reissues.

You get a lovely gatefold cover with Francis Wolff black and white artist portraiture beautifully reproduced. On some titles, you get artwork of Reid Miles design quality, which never previously existed.

The price is in line with the quality of the product, and I think is great value for money. I should add it was my money – these were purchased by me, not review copies.

If it is a title that hits the spot for you, the Tone Poet Series are equivalent quality to the MM33 issues, some may think better (vinyl material) at a similar pricepoint, but for recordings which have not been issued at this level of quality before. 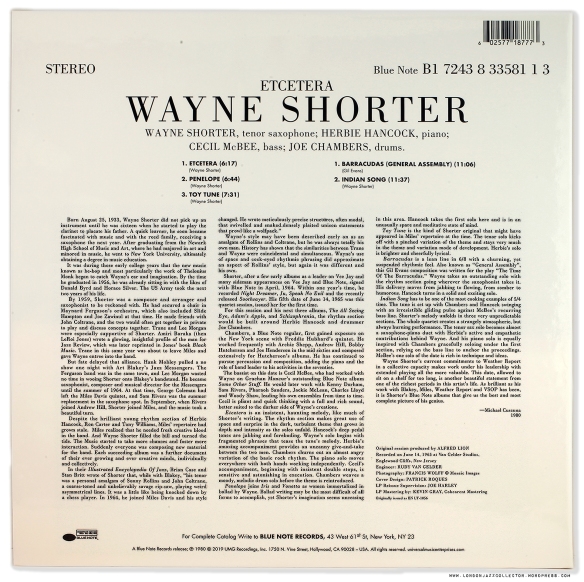 As if you were not spoiled for choice, all but one track, Toy Tune, appear on a 1979 Japanese issue mischeviously titled “The Collector”  (not LondonJazzCollector) reviewed back in 2016

I had this title and had not connected the two until preparing this post, lack attention to detail, feet of clay, LJC! I don’t have encyclopaedic knowledge. But fortunately I have accumulated sufficent alternative issues to make informed comparisons. I need to check this out, but I suspect the King Reissue will be soft and lacking tonal and dynamic range compared with the TP.  We will have to see what happens. I am happy with whatever happens.

Great thing about record collecting, you have no idea what my happen next. Exciting!