At LJC you never know what you are going to find in your mailbox, apart from those tiresome MICROSOFT ACCOUNT  DEACTIVATION WARNING emails .  So it was a pleasant surprise to hear from a California-based writer, Jeff Gold, who wanted to tell me about a new book he had written, exploring the life of Jazz Cubs in the seminal decades of bebop, in the ’40s and ’50s.  I knew little about this era, Jeff had  original research through interviews with the Greats that are still with us, and original picture material to complement the story of  those halcyon years.

Jeff picks up the story.

LJC readers might be interested in my new book, Sittin’ In: Jazz Clubs of the 1940s and 1950s. As far as I can tell, it’s the first book about American jazz clubs of this era, and the first published collection of souvenir photos from these remarkable spaces.

Club souvenir photos were quick snapshots taken by a club’s in-house photographer and developed on-site, ready to be taken home at the end of an evening for a dollar, a cheap souvenir of a night out.  Sometimes people would ask the club’s performers to join them for a photo–a primordial version of today’s celebrity selfie.  Sittin’ In includes pictures of fans posing with Charlie Parker, Dizzy Gillespie, Louis Armstrong, Duke Ellington, Art Blakey, and Oscar Peterson and even a photo of frequent Birdland customer Marlon Brando posing with some other patrons. 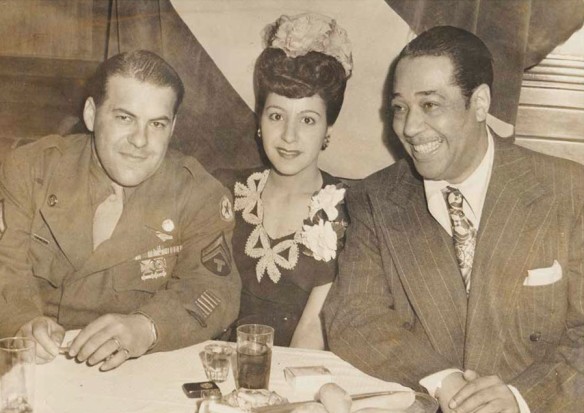 While jazz fans may have seen pictures of these clubs, they are almost always of the outdoor marquee, or the performers on stage.  Rarely have we seen the audiences inside the clubs.

I’m a former record business executive and sometime author, but most of my time is spent on my online rare record and music memorabilia business.  I’d sworn off writing more books, but then came across (and bought) an extraordinary collection of these photos and memorabilia from jazz clubs.  Seeing this collection for the first time, I knew it would make a great book.  If I hadn’t seen things like these, I doubted many others had. Together it formed a visual record of a rarely seen and poorly documented world—a sort of accidental history.

While I know a fair amount about jazz, I was no expert on jazz clubs.  My first instinct was to interview musicians who played these clubs, to get eyewitness accounts.  Through music business connections I was able to interview Quincy Jones, who began playing Seattle clubs as a teenage trumpeter in the 40s, moving to New York in the early 50s.  He told me Birdland “was like the Vatican of bebop” and that 52nd Street was “the land of the revolutionaries.”  When I asked if race had been an issue at the clubs, he said “Not at all. Back then it wasn’t about color in the clubs, it was about how good can you play, mofo.  Racism would’ve been over in the 1950s if they’d listened to the jazz guys!” 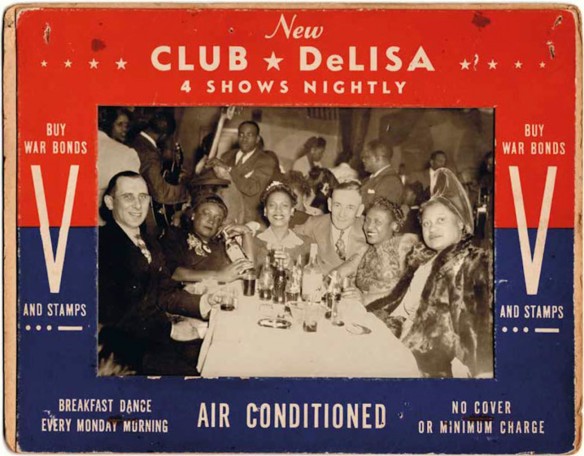 I miraculously was able to speak with Sonny Rollins too, who like Quincy, has incredible recall.  He told me about growing up in Harlem, playing shows with his teenage band The Counts of Bop (with Art Taylor, Jackie McLean, and Kenny Drew!), and how as an underage teen he snuck into 52nd Street clubs, with a drawn-on moustache.  Sonny noted jazz musicians “never get credit for the way it was such an integrated scene” and how “jazz was really where the racial barriers were broken down heavily.” He recalled working with Bob Weinstock of Prestige and Alfred Lion of Blue Note, and how “we had to be together” and “race and politics, that’s something that had nothing to do with the music…by the time bebop was there, it had nothing to do with race.”

Our conversation touched on many other topics: how Al Capone was a jazz fan, that Birdland MC Pee Wee Marquette demanded “tips” from musicians wanting their names pronounced correctly, and how in small clubs the audiences “sort of played with you, they’re like part of the band” among many other fascinating stories.

I also thought it would be interesting to get the point of view of a younger musician, and through a mutual friend met pianist/composer/educator Jason Moran.  Jason is a student of jazz clubs—as a visual artist, his touring museum exhibition STAGED includes full size recreations of the stages of the Three Deuces, Savoy Ballroom and Slug’s Saloon.  Jason hadn’t ever seen club souvenir photographs before, and had many deep insights about clubs, jazz audiences, race relations, documenting jazz history, art, and much more.

Next, I spoke to Dan Morgenstern, who arrived in New York in 1947 as a refugee from Nazi Germany.  A 17 -year-old jazz fanatic, Dan began hitting the clubs almost upon arrival.  He described listening to Symphony Sid’s radio broadcasts from the Royal Roost, venturing out to clubs, and tips helpful musicians shared for navigating the clubs on a budget (“They told me not to order a drink because Id’ get a transparent glass.  Get beer.  The bottle is opaque, so the bartender can’t tell how much you’ve had.”)

He recalled interacting with musicians including Charlie Parker during breaks, befriending various performers, going up to Harlem, how the supposed rivalry between traditional, swing and bop musicians was for the most part manufactured, and much more.  Dan’s extraordinary career path took him from teenage fan to critic to editor of Downbeat to director of Rutgers University’s Institute of Jazz Studies, for nearly 30 years.

Finally, I thought it would be worthwhile to have someone expert at analyzing images to help me deconstruct the layers of information in these photographs.  I was able to convince Robin Givhan, the Washington Post’s Pulitzer Prize winning fashion critic, to look at some of these photographs and share her reaction.  As expected, she noticed many things that I hadn’t.  On seeing a photograph of Charlie Parker in a pin stripe suit posing with two fans at the Royal Roost, she noted “It’s quite the flamboyant suit. It looks very much like a stage costume, with the really wide lapels that look much wider than the guy that he’s with.  It’s an exaggerated suit, meant to be seen from the back corner of the room.” 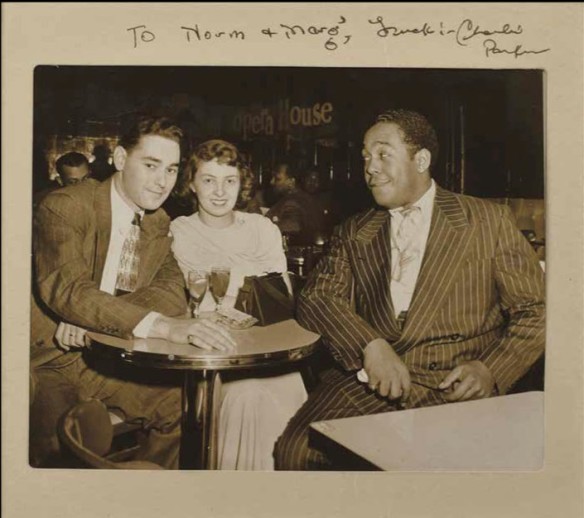 After these five conversations, I felt as if I’d gotten a kaleidoscopic view of these clubs and images, and began the hard work of researching individual clubs, and editing this all into a book.  It took a long time, but in the end, I’m very happy with the result.

I got all the affirmation I needed this week, when I received this brief message from Sonny Rollins: “Great book Jeff, congratulations. A story that needs to be told!”

“I am Sonny Rollins, and I endorse this book”

Sample pages, playlist and more at SittinIn.com  especially worth a look, more sample pages No one wearing masks or sitting a meter apart, it is nice to be reminded of the old normal.

Jeff’s book is scheduled for release November 17, which is good timing, now Santa has been deemed an “essential worker”, and Lapland is out of lockdown.