Another lost recording, but “studio quality” not bootleg, before a live audience auditorium recorded for radio broadcast, ORTF, Paris, 1975.

The recording does not declare – mono or stereo. The sound stage is effectively mono, but there are vey small occasional differences in the left and right channel waveform. Pictured, the gain is slightly higher on the Right Channel (lower waveform) than the Left Channel (upper waveform), quite possibly an artefact introduced in restoration or mastering. I don’t see this magnitude of diference on other recordings

This aside, it looks mono, but I chose to rip in stereo to preserve any differences. Perhaps the remastering engineer was similarly uncertain, depending on how the Radio France engineers operated. Eitherway, it sounds good on the turntable.

Transversales  Disques is a French record label based in Paris, specialised in releasing long lost tapes and reissuing rare records & soundtracks. ORTF  is the French monopoly state broadcaster for TV and Radio. The source is INA (Institut national de l’audiovisuel) a French public foundation in charge of the legal deposit of French radio and television and the preservation of radio and television broadcasting heritage. I’m not sure how this recording qualifies as “lost”, unless misfiled, as French government bureaucracy is pretty good at paperwork. It is everything else that is anarchic. Perhaps “lost in time” .  .  .

A fabulous session, brought Pharoah to life for me. It is funky-spiritual, in the  Strata East vibe so worshipped by the DJ-tendancy, and I can hear why. Simple hypnotic repeating motifs. Lyrics, such as they are, are rhythmic chants rather than narrative.

On the selection  Love Is Here 1, the rhythm section maintain a sense of urgency driven by an unyeilding repeat bass riff. Pharoah floats above with simple melody lines punctuated with pedal-points, oblique harmonies, dissolving into a climax of distortion and dissonance, before returning to “normality”.

Pharoah has an extraordinary musical vocabulary, ranging from vocalising a ballad through the tenor, to whooping abstract sounds, to full on road-drill passionate shrieking. Not cacophony but with purpose in crescendo. Very powerful and emotional, I don’t think any other player reaches such heights.

I’ve been going around all day humming Love Is Everywhere . The sentiment is Universal Love, the ultimately flawed optimism of the flower power generation. Unlike transitory, romantic ” I Lurve You, Baby” of  a million pop songs, Universal Love makes no demands, like cleaning and washing up, or changing nappies, and comes with a groove fitted as standard. Luckily it is not exclusive, you can have both.

Modern vinyl production, customary dj-affectation: track-listing for both sides on just one label, (consider yourself lucky to have any information).

Life in black and white, photos from rehearsal and performance. Bi-lingual text in fluent hipster-speak, mystic, cosmic and spiritual, complete with obligatory references to Sun Ra and John Coltrane, and Love Is Everywhere, hypnotic jazz funk. 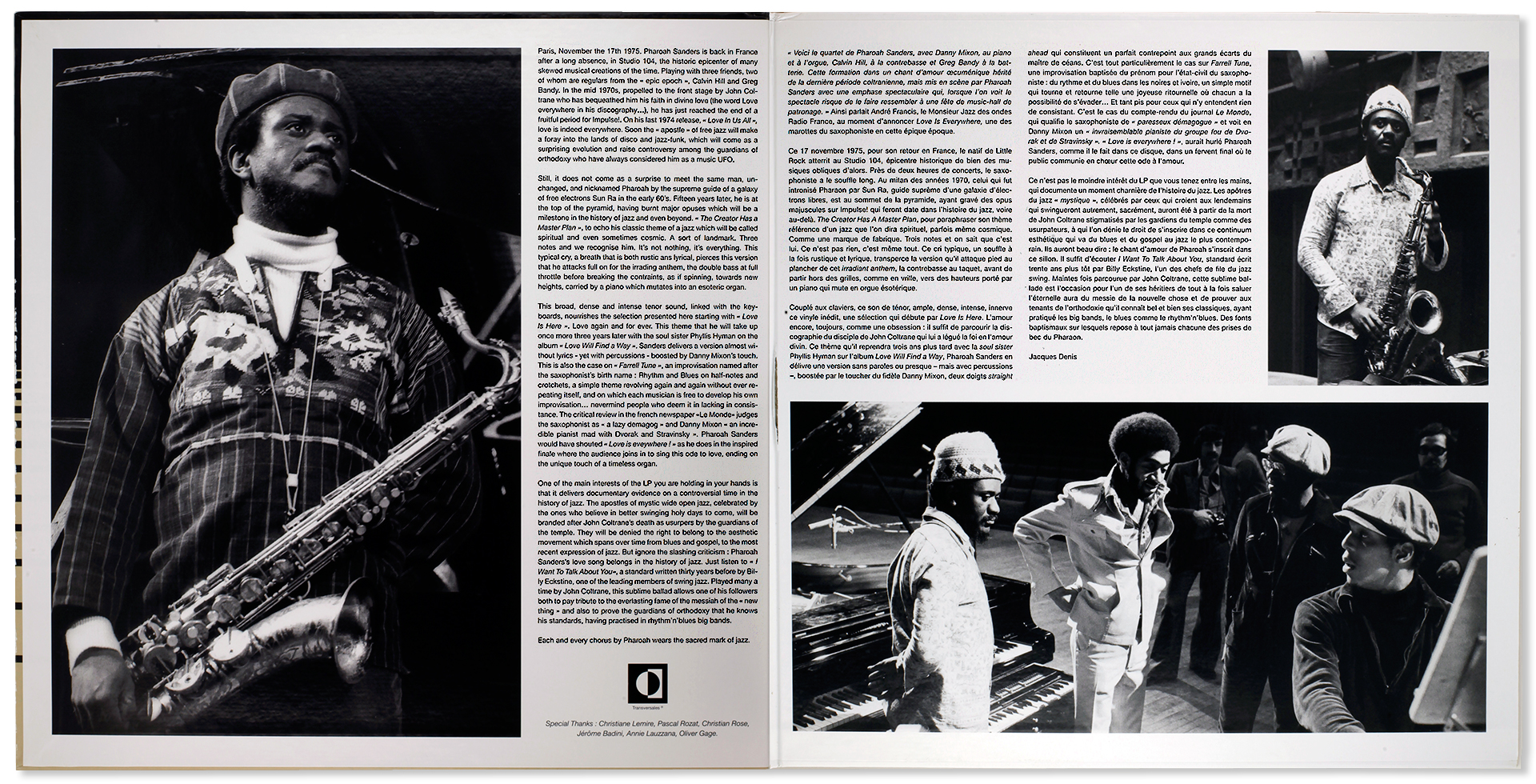 If a record is not easy to find, YouTube comes to the rescue, but without those all important scene-setting photos. Pharoah plays us out, starting  with the Coltrane classic I Want To Talk About You (Billy Eckstine/ Soultrane)

and of course, The Creator Has A Master Plan

And the finale to the delight of the audience, just three words in English, everyone can join in, Love Is Everywhere

It’s one of those hipster “twists-cap-sideways” posts. And it is one of those “looking over your shoulder” posts. With uncanny timing, Mosaic Records weekly mailing today riffs a 2014 interview for WBGO with Odean Pope and Pharoah Sanders. Seems Pharoah’s suit was not back from the dry cleaners in time.

If you stll have an appetite for 1970’s culture, forget Tarantino’s self-indulgent over-long Once Apon A Time In Hollywood, LJC recommends Netflix’s 19-episode Mindhunter.  Set in the decade of serial killers, the new science of “criminal psychology”, and fabulous cars, it is quite gripping. People in lockdown need to escape more – the past seems as good a place as any.