Thank you, LJC readers, today we just crossed over five million page views, not bad for a subject that has little commercial presence,  a labour of love.   – LJC

A post timed with the release of The Rajah Tone Poet, when it should be of most interest. But as usual with LJC, the release last week is a mere jumping off point on this recording’s laboured path from 1966 to publishing light, ensnared in the departure of Morgan in 1972, along with the end-run of many things jazz after the glorious ten-year run of 1956-66. It’s not just a recording, it’s an era, many pieces of a jigsaw connected, a context which enriches our occasionally vacant present, and gives us something to look forward to – the arrival of postie at the front door, The Prince is calling. 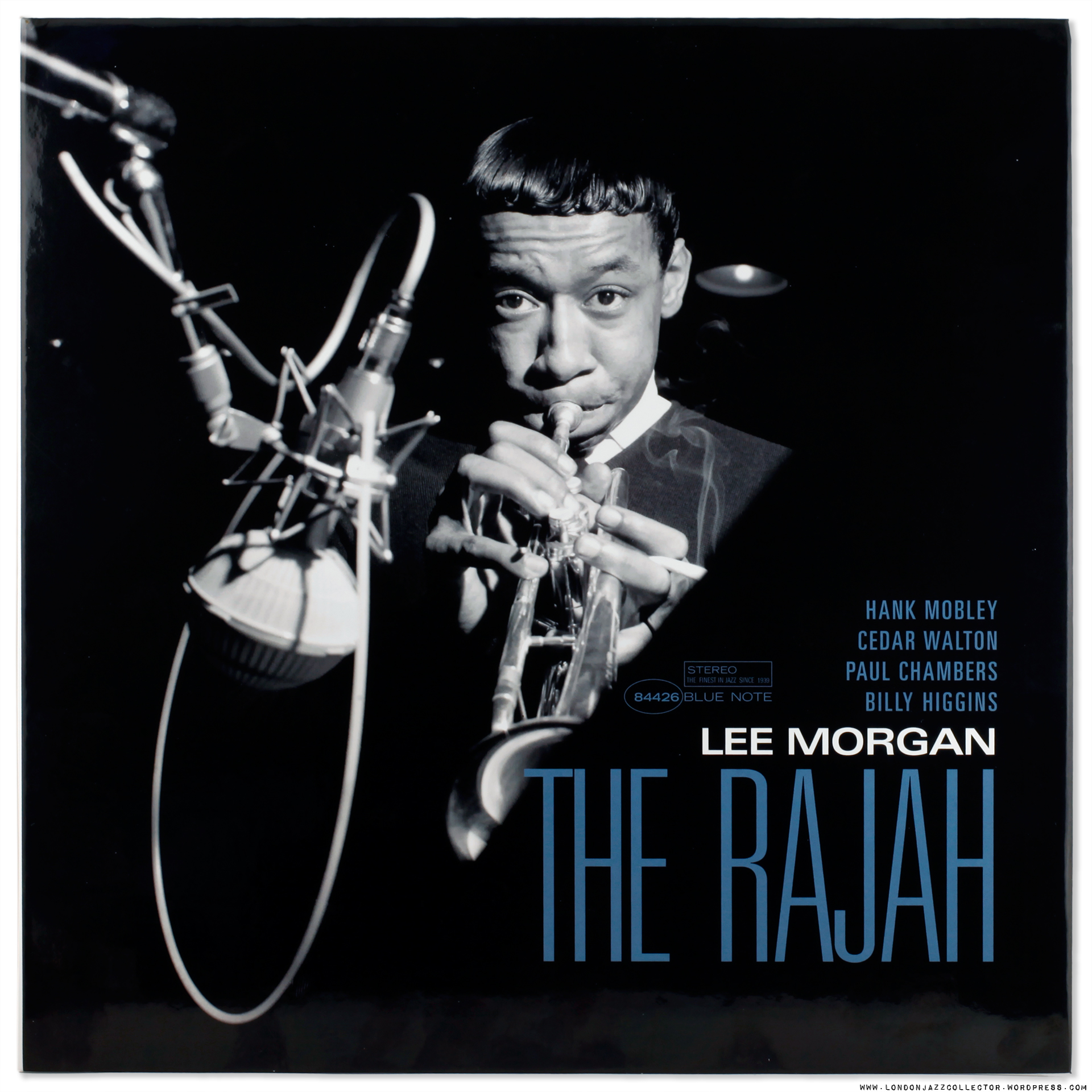 Selection: The Rajah  trans. a King or Prince in India; also a hot spicy curry house situated on West Barnes Lane in Surrey.

The Rajah session was held six months into Liberty ownership of the Blue Note label.  Perhaps Englewood Cliffs had been booked well in advance, or the session sanctioned by Liberty carry-over management. In any event, the session was held, and promptly forgotten.

Forgotten, until six years later, when in 1972, the name Lee Morgan shot into the headlines. The catalogue number given to The Rajah – BST 84426 – was among the last dozen titles assigned by the Blue Note/ Division of Liberty Records, which ended nine titles later at 84435.  The catalogue numbers around 84426  include albums by Marlena Shaw and Bobbi Humphrey recorded in the Summer of 1972, the usual lag of three months from session to release. Lee Morgan was shot dead February 19, 1972. Assigning a catalogue number to a Lee Morgan recording in the Spring of 1972 , a couple of months after his death, was simple opportunism, setting the stage for possible posthumous release.

At the time there must have been a lot of heart-searching in the record business how to mark Morgan’s untimely passing. However the recent passing of Chick Corea didn’t have me rushing to stock up on Corea albums. Almost everyone I listen to is dead, there is no hurry. Besides, they are all alive, reanimated on my  turntable.

Morgan’s last session for Blue Note was recorded five months earlier, on September 17-18, 1971.  Originally assigned BST 8438, it was reassigned as BST 84901 and issued shortly after Morgan’s death, simply as Lee Morgan (self titled), significantly, on Division of United Artists label. By 1972, not only was Lee Morgan dead, so was Division of Liberty.

The Rajah fell between many stools. Perhaps not strong enought to be a memorial album, and not “his last session” (a creepy marketing idea if ever there was), a catalogue number allocated in 1972, but the title remained unissued for another twenty years. Then, in 1984, EMI/Capitol released The Rajah‘s first vinyl edition, BST 84426. Unfortunately, employing Direct Metal Mastering, a last gasp of the format known as the vinyl LP, which shortly would also be declared dead.

Shunned by collectors, very few auctions of BST 84426  are found, a handful of Japanese issues and a lacklustre French Pathe Marconi,  all less than $30. Capitol Manhattan DMM rank among the poorest sounding reissues in Blue Note history. This recording should still be virtually unknown, at least until now.

The Rajah dropped out of sight for a further thirty plus years, Then something rather remarkable happened:  vinyl engineering and manufacture finally caught up with vinyl audiophile replay, in actual performance not just marketing hype: all-analogue mastering from original tapes offers unrivalled sonic reproduction, and an affordable quality vinyl manufacture, teamed up with with on-line purchasing and home delivery, previously unthinkable.

The biggest upgrade I have experienced in my audio listening is the replacement of all component power connection fuses with Furutech Rhodium fuses. The transparency and presence uplift is absolutely extraordinary, that is what you are listening to on the rip. The finest source requires the finest reproduction chain of components.

Welcome Lee Morgan, Hank Mobley and friends into your listening room. Your Prince has come, The Rajah has finally found a good home, your home, courtesy of the Tone Poet.

What attracted me to Rajah was the artistry of the players – Mobley in particular – and the way they work together. Mobley is in command of the horn, Morgan is confident and tonally rich, Cedar Walton leads many of the tunes,  percussive hands work the boogaloo accents like Barry Harris, and he holds his own in improvisation. Billy Higgins may well be the hidden star of the album, exceptionally well recorded and reproduced, impecable rhythmic drive, metronomic rimshots, rhythmic fills and taps on the cymbals, with a syncopating bass drum pedal,  Cedar is tasked to lay down the beat. Of all the players, Chambers seems a little reserved, or softly recorded, but we know his strength from countless other Blue Note recordings.

The compositions and arrangements are reminiscent of Horace Silver, probably due to the forward style and emphatic comping of Cedar Walton. Cedar opens many of the numbers, and several bars later, the front-line slides in.  The arrangements give each player plenty of space, with pungent harmonies between Morgan and Mobley. Everyone is very at home with the material and each other.

Just two months before The Rajah session,  the same team of Morgan, Mobley, Walton, Chambers and Higgins, but with the audacious addition of Jackie McLean, recorded Lee Morgan’s Charisma.(BST 84312) which did make it to release. Charisma is a must-have, especially for its delicious slower-paced version of Duke Pearson’s boogaloo killer, Sweet Honey Bee. I’ll throw it in as a bonus track. I swear it will liven up your weekend house cleaning.

More Mobley for your money! Though ostensibly The Rajah and Charisma  are Lee Morgan titles, they include a generous helping of Hank Mobley, on top form.  By 1966, Mobley’s star was beginning to fade. By 1967, failing in health and lifestyle,  Mobley managed just one release a year: High Voltage, the diasterous Reach Out!, and The Flip. Some excellent Mobley recording sessions were left on the shelf, until the late 70s when Michael Cuscuna issued them in the treasure trove that is the United Artists LT series: Thinking of Home, Far Away Lands, Third Season.

The last Mobley session to reach release at the time was also with Cedar Walton and Billy Higgins, “Breakthrough”, for the Cobblestone label, recorded at Bell Sound, February 22, 1972, three days after Lee Morgan’s departure. The bass player on this occasion was Sam Jones. It would have been Paul Chambers, but unfortunately, Chambers died three years earlier, in 1969.  I guess musicians became hardened  to losing friends, the music must play on.

Natural presentation without any obvious roll-off or boosting, no botox.

Love to see one of the real stars of the performance in the portraits, the microphones, without which none of this would be possible. If anyone knows the mike, a chance to show off. 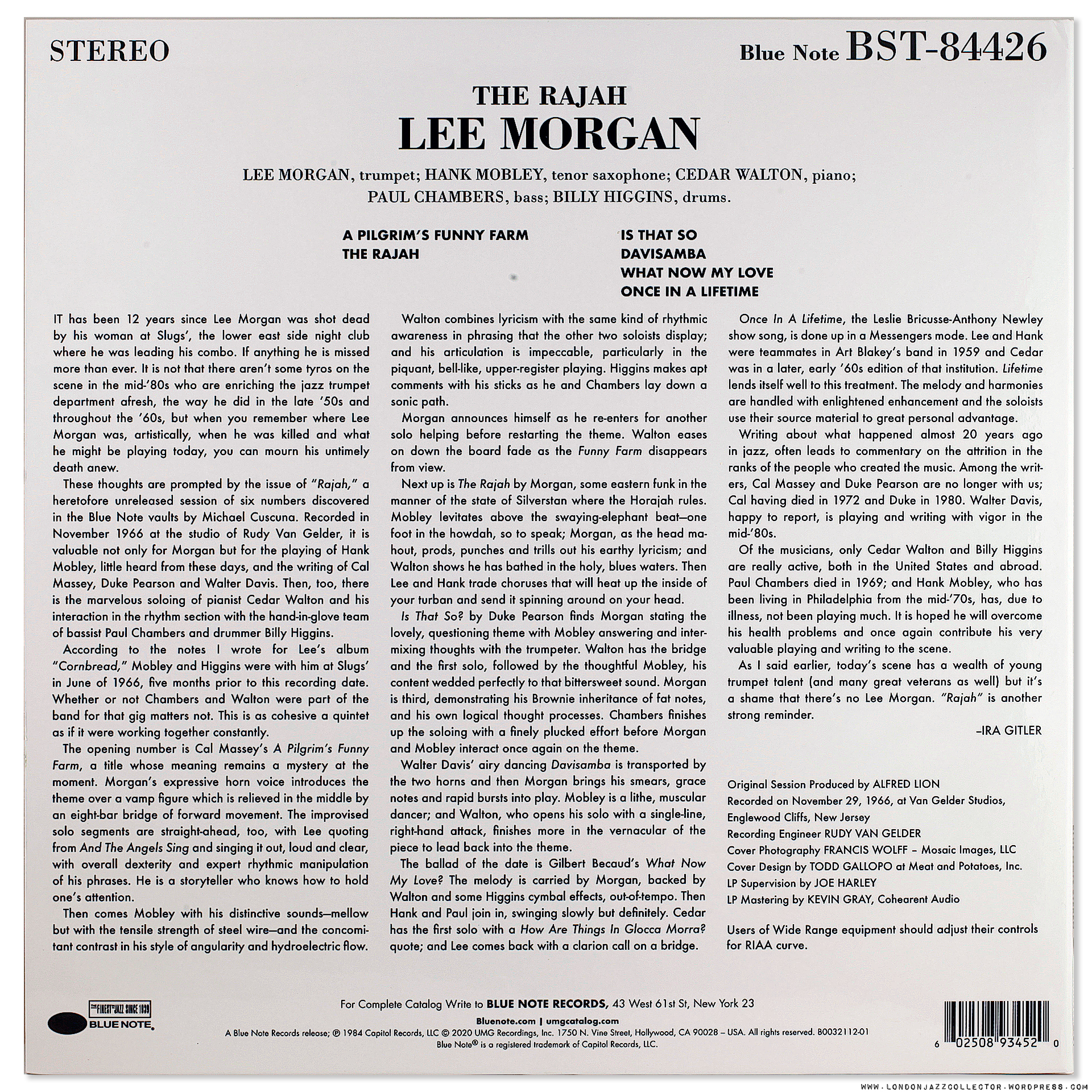 The TP was a welcome offering, not a record I owned, with the benefit of the best remastering, and home delivery. Its not much, but right now, its all we have.

Hear Lee Morgan’s actual last 1972 session with Charles Earland. Lee’s solo kicks in at 3:40, after a syrupy soul jazz organ, flute  and big band combo. Around a minute and a half pure Morgan solo, before the big band drowns him out.

Never judge a book by its cover, nor  musician by their hat, unless they are called Thelonious. I had a bunch of these Charles Earland albums purchased new, but I could not have told you who the trumpet man was, or what happened to him.  The music has not worn well, though soul jazz organ fans may disagree. Earland’s hat, on the other hand, is certainly worn well, on that we can all agree.

The Rajah is a quality outing from 1966, and, I must add, its arrival is better late than never.