Selection: Straight Up And Down (Corea)

If the sound is familiar solid Blue Note, it is because the assembled team includes the core members of The Horace Silver Quintet from 1959 (Finger Poppin’)  through to 1964 (Song For My Father): Blue Mitchell (trumpet), Junior Cook (tenor), Gene Taylor (bass), Mickey Roker steps in here for the regular Roy Brooks (drums). Take Horace out of the band, replace him with Chick Corea or Cedar Walton. Chick takes the piano seat for his two compositions, the undervalued Cedar Walton delivers solid underpinnings on the other four tracks.

Boss Horn is one of Mitchell’s best recordings, fronting a septet, with arrangements by Duke Pearson. On the menu, two boogaloo boppers, a jazz standard, and Chick Corea brings two compositions, “Tones For Joan’s Bones” ( It’s Mrs Corea’s bones again, send for the chiropracter) and “Straight Up and Down”, which gets my selection. Straight Up and Down is a great workout, for me the pick of the album, Chick’s dazzling fingers skating over the keys, and high-energy solos, especially Junior Cook and ever reliable Pepper Adams.

Mitchell offers a particularly strong reading of the standard  I Should Care, clarion call clear and burnished tone, lyrical, crafting the melody. The four other horns – alto, tenor, bari and trombone –  huddle together and deliver the ensemble harmonies as scored by Pearson.The ability to “arrange” was a prized talent, though the arrangement here is somewhat glutinous ’40s Hollywood form.  I Should Care was a 40’s popular song, Frank Sinatra with orchestra. Perhaps that presentation is what Pearson was aiming for.

I Should Care has a solid jazz history, with versions by Bud Powell (on four different albums) , Thelonious Monk (Thelonious Himself) , and Bill Evans (How My Heart Sings). I’ve learned to try the lyrics, so here we go –

A song rhyming sheep and sleep? Another large dry Martini please, and some valium.  Three more verses to go but at this point I lost interest. I should care, but I no longer did. Frank Sinatra injects it with a little more life than the bare words on the page. Compare Blue’s reading with that of Old Blue Eyes:

I left the shrink on. It’s done its job, but it does no harm to leave it on.

The Discogs description didn’t mention any Van Gelder stamp, and without label pictures I couldn’t see if it was a Bert-Co or a Keystone label , so expectations were low. The usual reason to failing to mention the presence of something of importance is because it is not there. No mention of ear usually means it’s got no ear.  Few sellers say “it has no ear”. It’s got no nose and mouth either. With no mention of a Van Gelder in the runout, I enlisted the help of another Detective.

Don’t mess with the Audiophile Detective.

Don’t try and reach for Paypal, punk. “I know what you’re thinking. Does this record have a VAN GELDER stamp, or not? But being this is a 1967 Liberty original pressing, with the Blue Note Division Of Liberty Records label, you’ve got to ask yourself one question: ‘ Do I feel lucky?’ Well, do you, punk?” 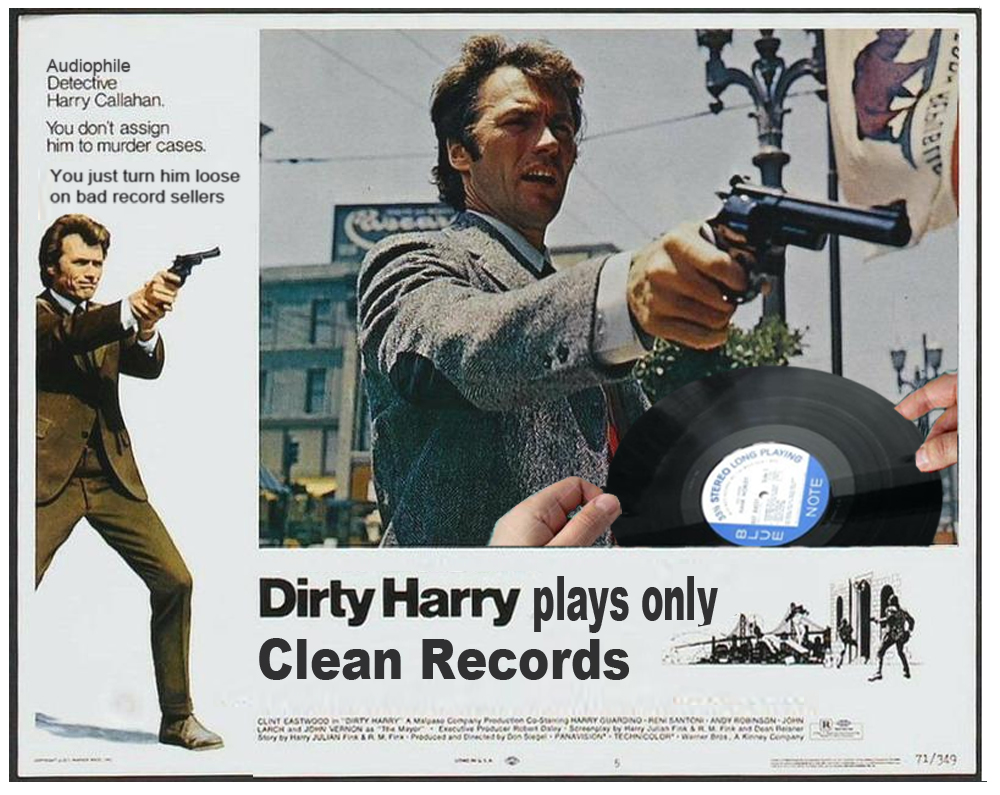 Boss Horn was a new title recorded some months after the Liberty aquisition of Blue Note. Unlike Blue Note reissues, Liberty new issues were usually VAN GELDER stamped on both coast pressings. I figured either way, East or West Coast pressing, it would be a Van Gelder copy. Feeling lucky, I reached for Paypal. The Magnum hammer clicked on an empty chamber.

My luck was in. When the record arrived, unwrapping revealed a VAN GELDER stamp and East Coast Keystone labels. But first it had a date with the Ultrasonic Vinyl Cleaner, see off over 50 years of dirt, smoke, cigarette ash, and … who knows what? 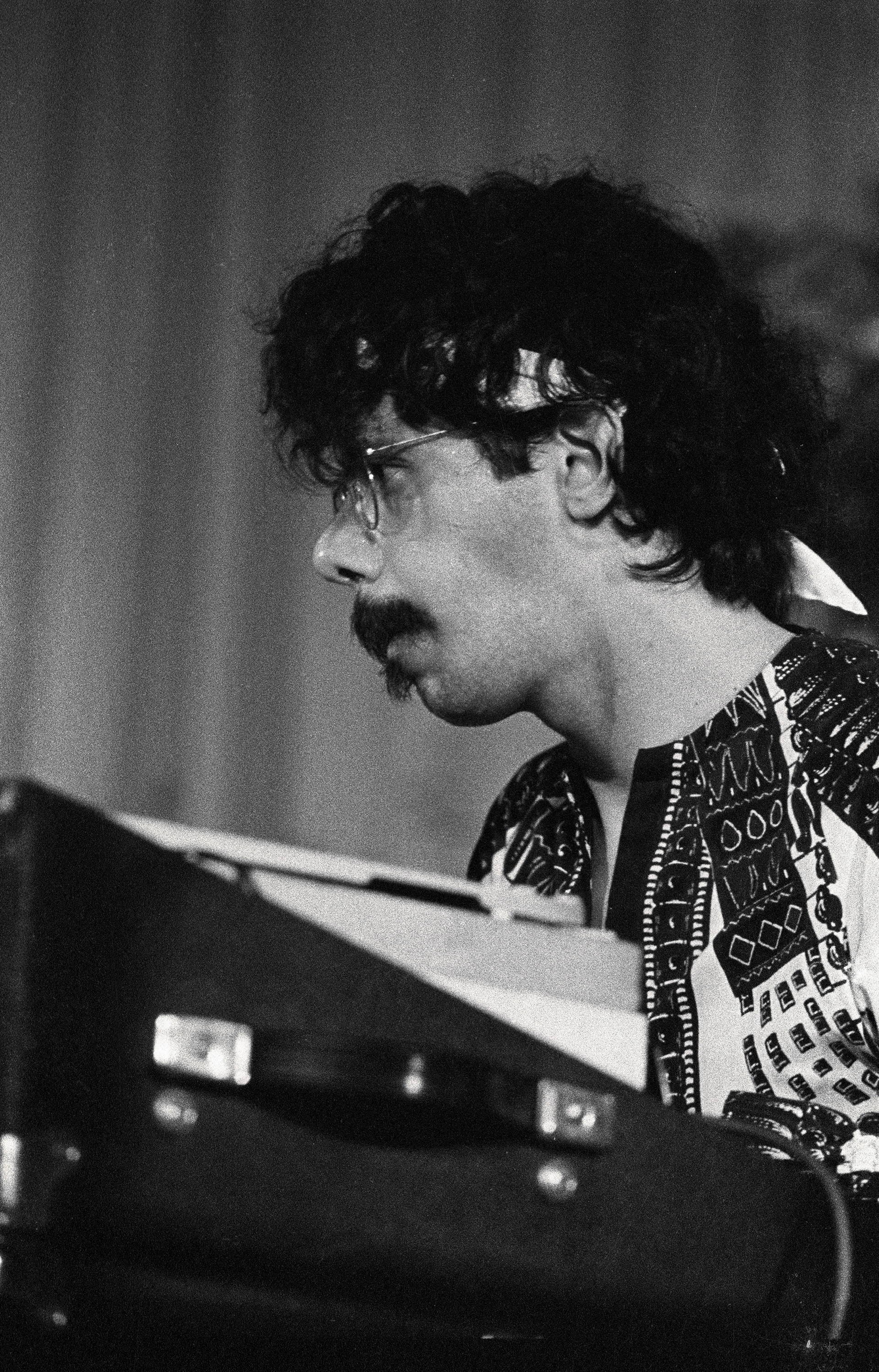 Original Blue Note pressings don’t come cheap, and this is  effectively original Blue Note, first edition. Recorded by Van Gelder at Englwood Cliffs, and mastered by Van Gelder, then issued by Liberty in late 1967. All the dates just spill over into the Liberty years, but apart from having no ear, or nose and mouth, the sound is pure Blue Note.

It also concludes my Blue Mitchell Blue Note Collection, which chronologically starts with the hugely under-valued  LT Series “Step Lightly” (LT 1082), recorded August 13, 1963. but not released until 1980 by Michael Cuscuna for United Artists.

The great line up  of Step Lightly pairs Blue with Joe Henderson on tenor, Herbie Hancock on piano, and Leo Wright on alto. Wright fled to Europe shortly after. The boogaloo Mamacita (Henderson) is parked firmly in 1963, a year before The Sidewinder swept the board, but the appeal of boogaloo was not yet recognised.

The LT Series are definitely worth pursuing, though seem to be becoming scarce.

Confessions of a rookie collector. Pulling this together for a Blue Mitchell post was instructive. I hadn’t realised I had aquired all these titles over the last decade, and as original pressings. In some cases I noted ill-informed disappointment on the inner sleeve of a record I purchased ten years ago: “NY label, but no “ear” ” I wrote, on a first pressing issued in 1967, with VAN GELDER.   It was the NY label that was wrong, but I thought wrongly I had been sold a pup  because it had no “ear”. You realise how little you knew as a rookie collector starting out, and how much you have learned. Some titles I had also neglected to play in a long time, or to review, time to make amends.

Two later titles follow in the tail end TransAmerica/Liberty years, 1969, Bantu Village and Collision in Black, which don’t come up to the standard of his earlier  Blue Notes.  In the early ’70s  Blue Mitchell moved to the Mainstream Records label, where he began to experiment with an enlarged line-up including flute and picolo, a second reed and vocal effects by Miss Susaye Greene. It sounds surprisingly good, but not a direction I wanted to pursue further.

Dirty Vinyl? No problem (until there’s a problem).

Dirty Harry meets Dirty Vinyl: a seamless link. Last week, my German-made AudioDeskSysteme Pro ultrasonic record cleaner experienced pump failure. After three and a half years of use, dead.  No user-serviceable internal parts, only an expensive out-of-warranty repair, return the machine to the Gläss factory in Germany for a new pump. Imagine if a Mercedes had to be freighted back to Dusseldorf to fit a new part..

This was one of those situations that reminds you of the need to keep the original packing  of things,  in the event of future need. 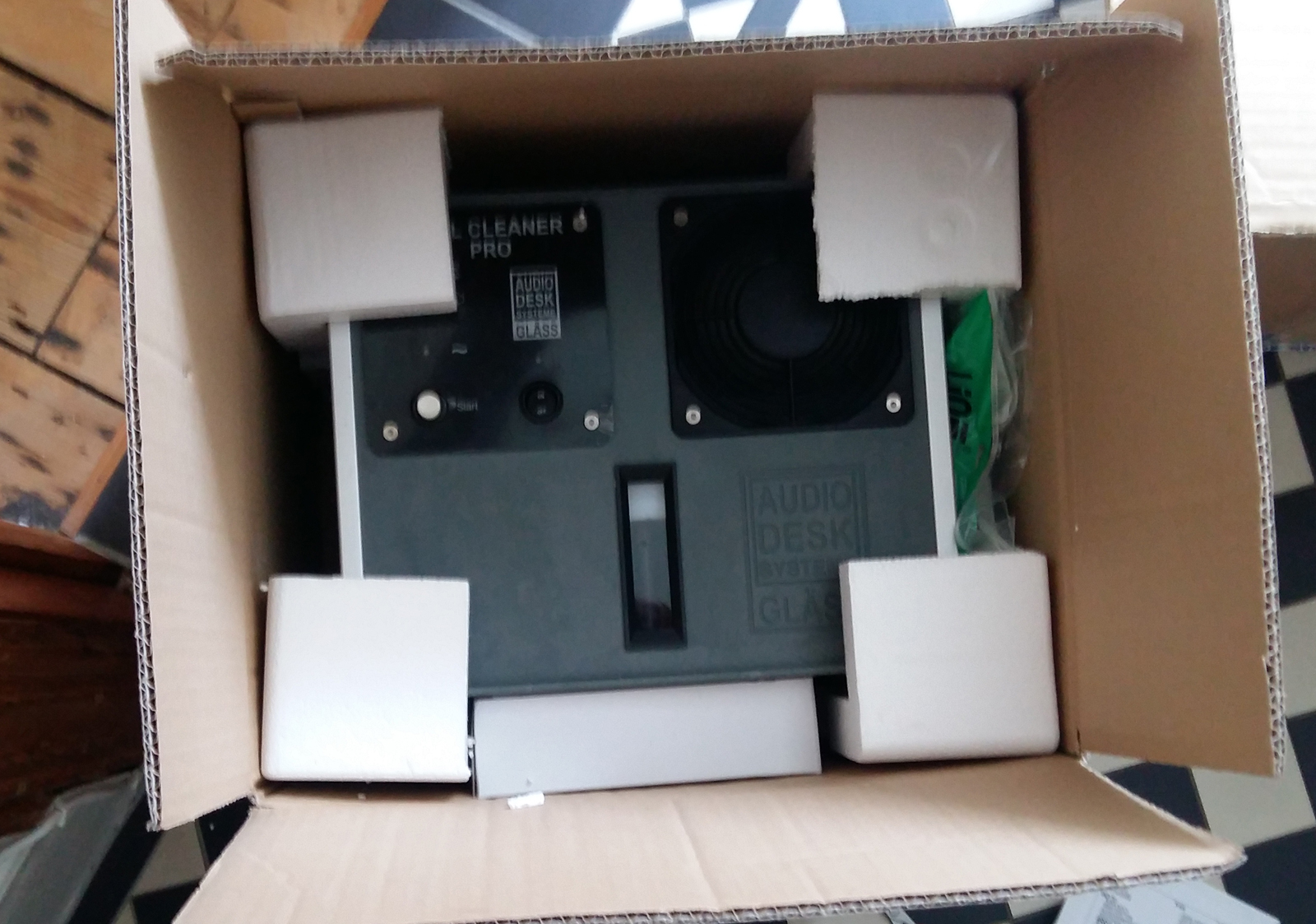 Boxed up, the dead machine was about to set out on an international courier journey, across a minefield of import/export Customs and Excise barriers.”So, an Ultrasonic vinyl record cleaner. What is the  Product Category Classification Code?  This type of machine doesn’t seem listed. (There is a helpline for hard-to-classify products, ha ha, up to six months turnaround time) . It is not an export, it is a repair-service return. And the code for that is?  Value, for value added tax? As a non-functioning machine it has no intrinsic value. But once fixed, on its return journey? No, it has already been taxed once, when it was first imported. But it has a value for insurance, of course?

Never was it more true that there are two economies: the Productive Economy, and the Obstructive Economy: the King’s tax-collectors over centuries, a burden on trade.

There were other record  cleaner options, but none attractive – a new ADS machine, a refurbished ADS machine (someone else’s pump failure). The rival Degritter cleaner is made in Estonia, twice the distance to Germany, and has no supply for four weeks

It’s a bugger. If your car breaks down, you call the garage, but if your record cleaner breaks down…call The Samaritans! My sympathies are with the dealers and importers of our essential vinyl machines.

The delights of vinyl. If only it wasn’t so much better than everything else, but sometimes the burden is heavy.