A Midweek Jazz post, for a change, a record LJC feels quite enthusiastic about.

I’m out on a limb here. I know nothing about this music, apart from recently listening to it, I will repost some background written by someone who does know what he’s talking about, a member of the golder circle of elite DJ hipsters, Tony Higgins – DJ/promoter/specialist music consultant on reissues and archive projects, who provides sleeve notes to reissues of rare albums.(Original text abridged by LJC, stripped down to the essentials, with occasionally additions)

“Recent years has seen much increased attention placed on Nimbus West Records, a jazz label that had stayed somewhat under the radar to all but a few mindful collectors and aficionados. The label’s artistic fulcrum is Horace Tapscott, a highly individualistic  bop-tinged pianist with avant-garde leanings; a legend, and something of a father figure to latter generations of L.A.-based free jazz players.

Among Tapscott’s protégés was a young flautist and saxophonist, Dadisi Komolafe (born Arthur Wells) Komolafe took Tapscott as his mentor. He recorded with Tapscott’s Pan Afrikan People’s Arkestra, a collective founded in 1961, which over the years hosted such names as Arthur Blythe, David Murray and Jimmy Woods. From the late 70s to the mid-80s, Komolafe appeared on many albums recorded for Nimbus West  but his sole title as leader, ‘Hassan’s Walk’,  sets him out as  a true talent.”

“Hassan’s Walk’ is a confident expression of post-Coltrane Afro-American heritage. It’s fierce but fun, and displays a luxuriant tonal range from a superb ensemble of musicians. There are two covers on the album: Wayne Shorter’s ‘See no Evil’, considered by many to be the album’s centrepiece (LJC interrupts, flute driven funky vibe, not my choice), and a lush reading of Monk’s ‘’Round Midnight’. Calvary (my selection) receives an impressive arrangement, building to a crescendo with Komolafe’s horn screaming for air before finding respite in Kelly’s shimmering vibes. Hassan’s Walk’ is a jewel in the crown of Nimbus West, a crown already replete with gems, polished to perfection.”

I’m late to the Spiritual Jazz party. Crescendo, horn screaming for air,  the emotional  climax that finds its natural place in Spiritual Jazz. It is not the continuous screaming of some free jazz, it is a purposeful release, at the summit of building tension.  I got my first taste for it with Pharoah Sanders: first the easy funky vibe, love is everywhere, then the mounting concentration, and finally, demanding release, it lets rip, wonderful. Its not free jazz, it’s spiritual jazz, emotional release is part of the vocabulary.  Some already knew this. 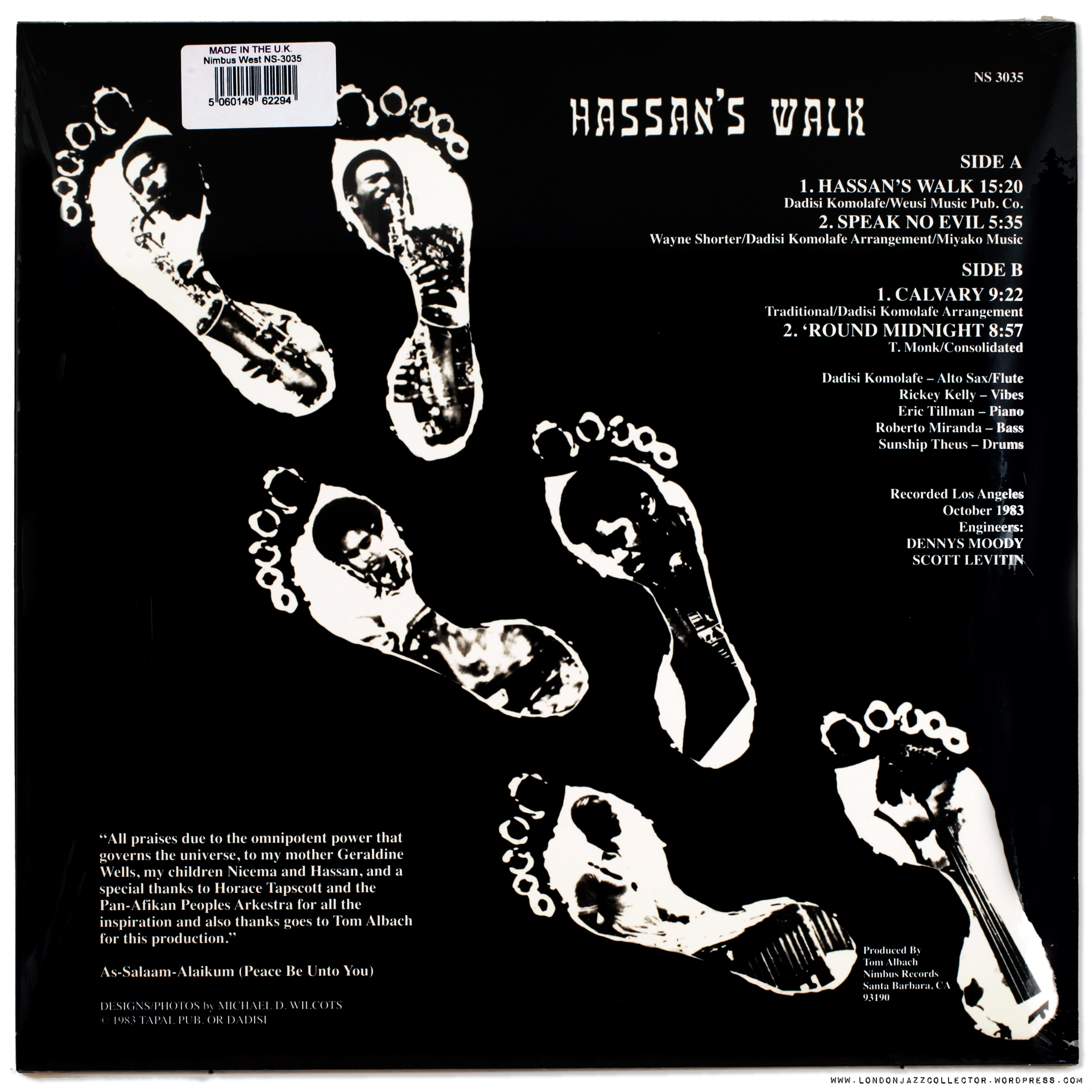 The Nimbus original is considered rare and sought after by the DJ elite and Spiritual Jazz afficionados but it’s not everyone’s cup of tea. About twenty copies have come to auction in the last decade, auction prices from a little over $100 to $350. Not cheap, but not in the four-figure league of Modern Jazz trophies.

Now about these Modern Reissues, LJC…I thought you said…

I admit I have long been very sceptical of Pure Pleasure reissues, due to their undeclared sources – “from the best available sources” could mean anything, because  there is no detail of the source, you can’t argue with it, like, original tapes exist but they are not available to us, so the best available to us… is …a casette of my grandad humming it, accompanied by spoons… it’s the best available. Words are tools, which can be used to reveal or conceal. I believe in the former and I don’t like weasel words. However, on the strength of a personal recommendation I took the plunge on two PP audiophile reissues, this Nimbus, and one Strata East.

I was unexpectedly and very pleasantly surprised by the presentation. It is not the cynical CD-to-vinyl sound i’ve heard too many times. It is vinyl-like, with lots of air around the instruments, very convincing sonic detail, the piano sounds like a piano, the cymbal-work sizzles high in the tonal range, the drums shows fast dynamic response,  the bass is tuneful, not booming. Even if the source is a high-resolution digital file, or copy tape,  Air Studios have managed to master it to vinyl to acheive audio-quality much superior to many of the so-called “audiophile reissues”

Most important. I guess the original recording for Nimbus must be a remarkably good job for 1983. If you have any original Nimbus your comments welcome.

The PP Strata East reissue is similarly very good presentation. It is dangerous to judge the whole PP reissue catalogue on a sample of two, but it is ecouraging to find something like actual audiophile quality can be acheived, provided the original recording is good. I don’t have an original to compare, so I’m in the “sounds great to me” club. It is not quite the Kevin Gray/TP expansive soundscape, but is very listenable, ticks my audiophile box.

The Strata East reissue I bought previously (Charlie Rouse) on the Austrian Everland label was absolutely horrid: castrated top end, lumpy bass, zero instrument  presence. Not all “licensed”  reissues are equal, some continue to be bad, and conceal their sources. Strata East’s current owners seem to be handing out licenses like sweets. They need to be more mindful of what is produced under their name.Pure Pleasure/ Ray Staff is a British reissue label, and get my thumbs up.

Any thoughts on Pure Pleaure, or Nimbus West Records, my ears are thirsty.