Selection: Half and Half (Charles Davis)

Elvin Jones: Everyone contributes a composition here except Elvin; perhaps that was the trade to be co-leader and pictured on the cover. Elvin was the youngest of 10 children, whose  father was a deacon and singer in the Baptist church choir, Pontiac MI. Elvin’s five-decade musical career saw him joined by two of his brothers, Hank the pianist and Thad the trumpeter.

Coltrane brought in Elvin in 1960, to replace Billy Higgins; Elvin departed Coltrane five years later, to be replaced by the more avant garde and free drummer Rashied Ali, whose “multi-directional rhythms” were more in accord with Coltrane’s then direction of travel: interstellar travel.

Jones standing among jazz drummers was characterised by his “prodigious technique, four-limb independence and penchant for polyrhythmic invention, coupled with a thunderous intensity. He occasionally shifted ride-cymbal accents from the downbeats to the upbeats of beats two and four, a revolutionary innovation and copied by nearly every subsequent jazz drummer“. (Only a drummer could write this stuff)

Jimmy Garrison: Who is the album leader: Elvin Jones / Jimmy Garrison?  Nominally Garrison, with 25 Coltrane titles under his belt, it was his only title as leader, and even then had to share it with Elvin, and McCoy gets to be “featuring”.  Garrison’s bass remained an anchor of the Coltrane  group right through to the end, 1967, and the last Coltrane recordings. Garrison left the stage himself in 1976, aged only 42.

Prince Lasha: Illumination! is one of only a handful of recordings by the regally-titled William “Prince” Lasha, (spelt Lawsha on the label). Calling yourself a Prince is cheeky but probably gets you better room service.

Sonny Simmons had the benefit of a series of albums recorded for Contemporary, and two for the all-important free-jazz label, ESP-Disk – Staying On The Watch (1966), magnificent evocative black and white cover, and to it’s right, Music From The Spheres (1968)

Born Huey Simmons, he adopted the name Sonny, on the basis that it never did any harm to  the careers of Sonny Rollins, Sonny Stitt,  Le Sony’r Ra and fifteen other jazz musicians also called Sonny, safety in numbers. Simmons finally stepped off the stage in April of this year, age 87.

Charles Davis I knew little of, he’s a bluesy and inventive player who swings. His Amazon Bio fills in the gaps: “Cited by musicians and critics alike as one of the most underrated saxophonists of his generation, Charles Davis was a contributor to the glorious days of 50s and 60s jazz. His work with Kenny Dorham brought him some attention, and he appeared as a sideman on more than 100 albums“, but rarely recorded as a leader – two  featured his family on the cover. I assume that is his son, Louis, on guitar, with another Louis, Hayes, on drums. Cut to studio: Call for Mr Davis, no, not that Davis, Louis. Louis? Someone call me? No Louis, the other Louis”… session descends into “Airplane” farce – Roger, Roger. What’s our vector, Victor? We have clearance, Clarence. Roger, Captain Oveur, over.

In the competitive music business, name recognition is everything. It doesn’t help having the same name as another jazz musician, trumpeter Charles Davis, and sharing a surname with Miles Davis. Had I been his agent, I’d have taken a leaf out of Prince Lasha‘s book and promoted him to King Charles. However he went on to enjoy a five-decade musical career, earning the Discogs entry Charles Davis(2).

All Music: “Ranges from advanced hard bop to more free sounds that still swing… it is the playing of both Simmons and Lasha (when is Lasha going to be rediscovered and recorded again?) that make this early “New Thing” date of greatest interest.“

It has the New Thing flavour: the melodies are prickly, spare, and repetitive, eschewing bop and post-bop modal forms. Perhaps it wasn’t a huge hit with record buying public of the day, copies not often seen, and reaches barely into three figures at auction.   But it is an under-priced gem, which the Van Gelder master brings to life. 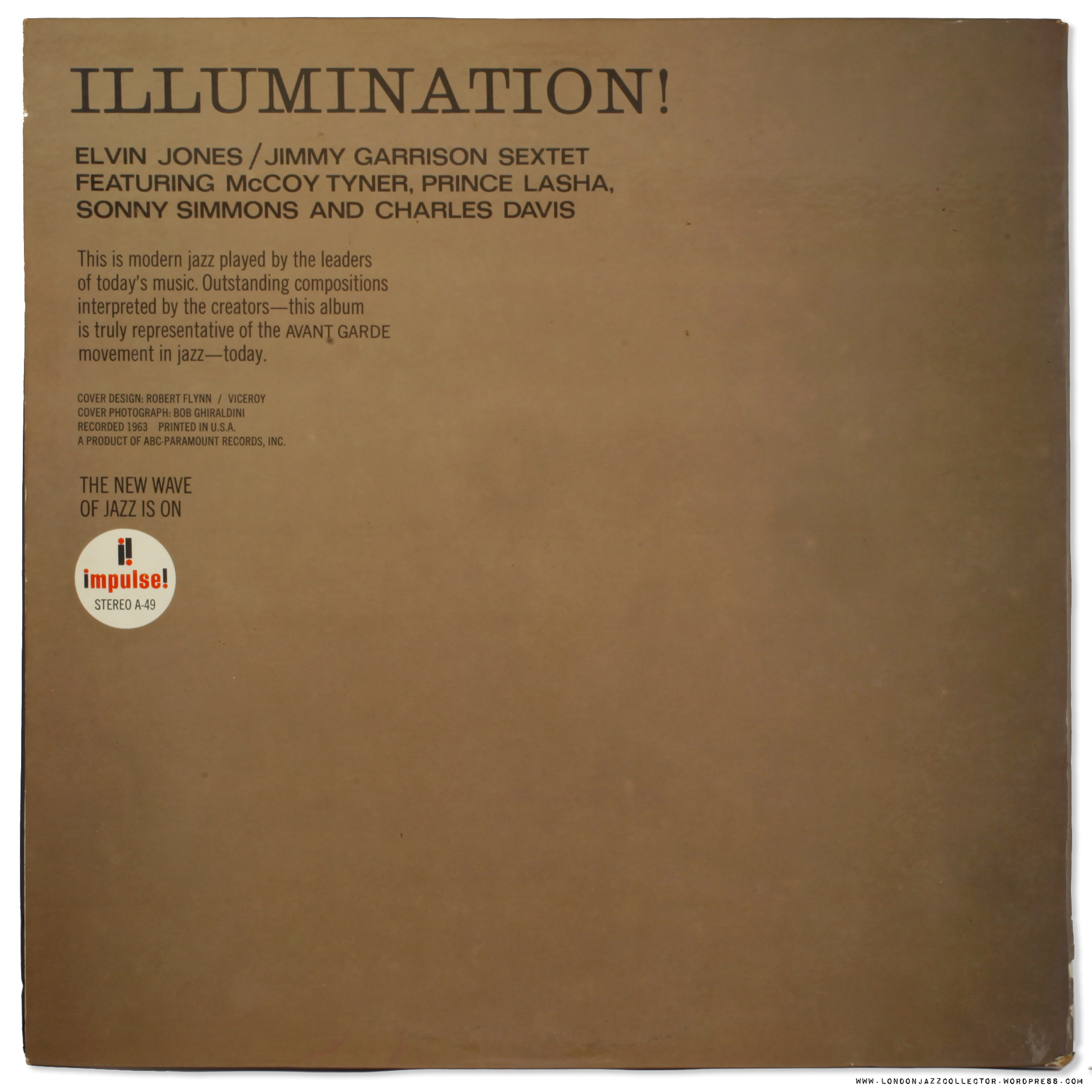 Harry M, our time-travelling jazz paparazzi, has nipped back to the late Sixties to bring us these magnificent pictures of Jimmy Garrison and Elvin Jones, at Jazz Expo 1968 and 1970.

Though still on the Orange/Black,  label 4 has the -A suffix which was introduced at A79-A, hence an earlier title with suffix is a later reissue 1965-7. Labels 5 and 6 straddle the incorporation/ registered trademark, single and double logo-box with and without ®, label footer changes from ABC Records NY address to copyright date ©1972. Caution: labels 7 & 8 Black/Neon Logo and Green Bullseye  break with the Van Gelder master. . Note the last four words in the description by seller of a black/neon label copy: No VAN GELDER stamp.

The Black/Neon and Green Bullseye labels are generally to be avoided, in this case, doubly so.

And the rest of Illumination! – Youtube courtesy of UMG

Mostly I don’t do obituaries, we have lost so many, another loss  is not unexpected news, but the loss of Barry Harris, Mr Sidewinder, deserves a moment of respect. He  leaves us to join the Boogaloo-in-the-Sky, angels with bee-hive hair do’s in white shift-dresses, a better place than much here. A blood test would find crochets and quavers in place of red and white cells, music was in his blood. His story here from NPR

Sidewinder, one more time for Barry.

Your music lives on.