A selection of life’s low points in buying records through eBay. 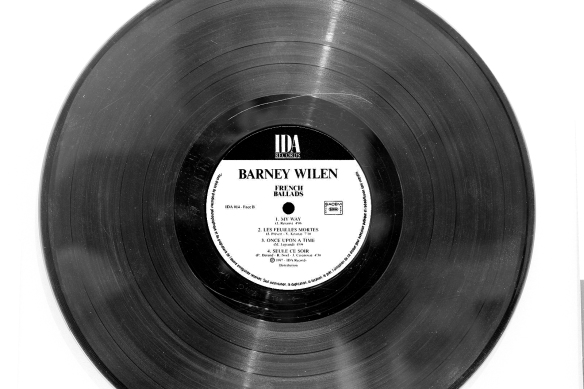 That deep scratch across the last track clicked loudly for about 3 – 4 minutes. The surface showed a previous owner who took no care with his records. I hesitate to say it but its French. It went back.

An Ebay seller is offering a copy of Lee Morgan “Indeed!”:

“I am going to tell you a lot of things that don’t matter, like the track listing, which artists plays on it, where it was recorded, and such like. Everything you would get buying a CD. I a NOT going to tell you anything important  for buying a record that would allow you to put a value on it, like when it was manufactured and by whom. I am also not going to show you anything that would enable you to value it, like letting you see the label or jacket detail. I’ll use a generic cover photo, trimmed-off edges.” 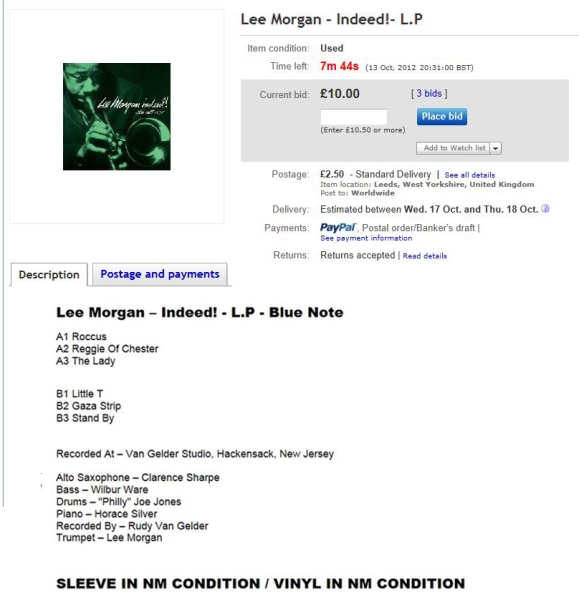 “Its in near mint condition!” And it is “Used” apparently. I bet if you were to ask you would get: ” I don’t know much about records, I’m selling it for a friend” Here is the value of auctions for the “real thing”:

Amazingly, three bids, standing at £10, and seven minutes to go. By the time you have added the postage, you have paid twice more than the shop price of a Scorpio, which is almost certainly what it is: a digital to vinyl transfer. The seller has not said anything wrong, all factually correct. They have just omitted to tell you it is a reissue.

Extraordinarily, Ebay do not consider this misleading or fraud.

On the same basis as the Lee Morgan, you could sell a copy of the Mona Lisa. As long as you don’t say whether it is a copy or the original. ” Sorry, I don’t know much about art, I’m selling for a friend”.

In many ways this has been a good week,  but the experimental return to buying records from the US has just crashed and burned. This was the baby – Roy Haynes Cracklin’ on New Jazz (1962 original) – and this was the lure: 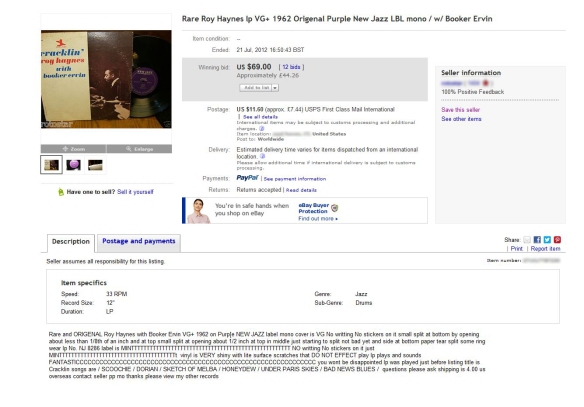 Conoisseurs of exclamation marks and hype will say: Watch out!. But it is very rare and an incredible record. The promise of VG+, despite “light scratches that do not affect play” was too strong – note 12 bidders felt the same. So this morning, the postman knocked twice and moment of truth arrived:

Track One, Side one, “Scoochie” – what you see above is what you hear below

I’ll let you judge for yourself how you would grade and describe this record, after use of the word “RARE!!!” ofcourse. I think the grade is “FAIR” – significant surface noise and not well cared for. 1950s owner with heavy tracking weight radiogram arm and propensity to jogging it, or early onset of Parkinsons at a guess.  It prompted me to ponder the meaning of “Does not affect play” and “sounds great”. . I fear this one will have to fly all the way home to the US, leaving me out of pocket to the tune of UK-US both ways. I really don’t understand why US sellers chance this kind of selling.

UPDATE (15/8/12): Seller issued a full refund on return of the record, but he’s a game lad, it’s gone straight back on eBay with a new photo and quietly amended mis-description that owns up only to light crackling. You have to admit, its an appropriately named record. The search for a decent copy continues.

The inglorious end of a fantastic ebay score, damaged in transit as a result of the seller’s careless packing. A very rare record just got rarer, with one less in circulation. 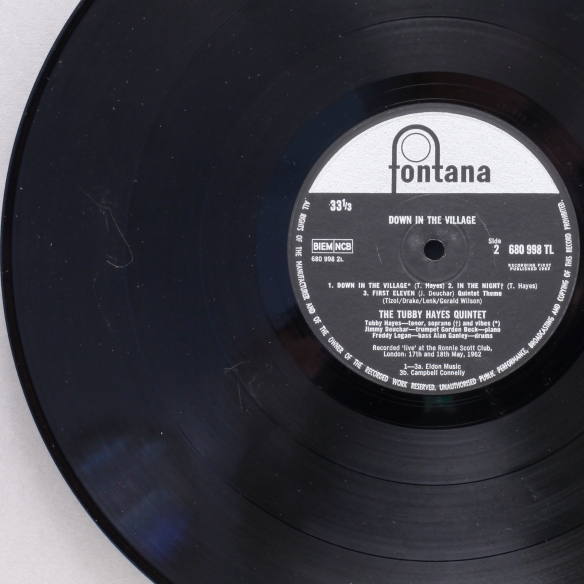 The seller packed the record with the bare unprotected vinyl surface against the surface of an old dirty polythene jacket which had probably an old office metal staple loose in side it. The damage was fatal, resulting in needle sticks and multiple deep scratches, rendering this previously excellent copy of Tubby Hayes “Down in the Village” worthless. So sad.

Tubby Hayes “But Beautiful”, complete with needle-stick finale at 5:25 – perfect for repeating breakbeats 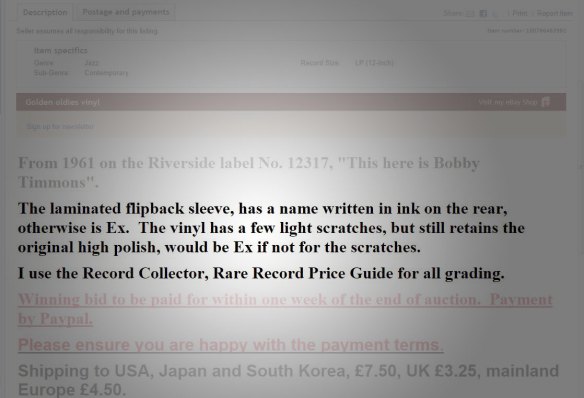 Not this sellers finest moment. He claims to adhere to  Record Collector grading standards, sort of. “Would be Ex but for the scratches”.  One of the “this puppy would make a happy and lively family pet were it not dead” school of seller. Perfect but for the faults.

Or this aspiring eBay seller making his first sale. Zero feedback, no reputation score, a newbie. We’ve all been there, you have to start somewhere, it’s coming up to Christmas, perhaps he needs the money, so I took pity on him and decided to give him his first big break into the glamorous world of big-time jazz selling: 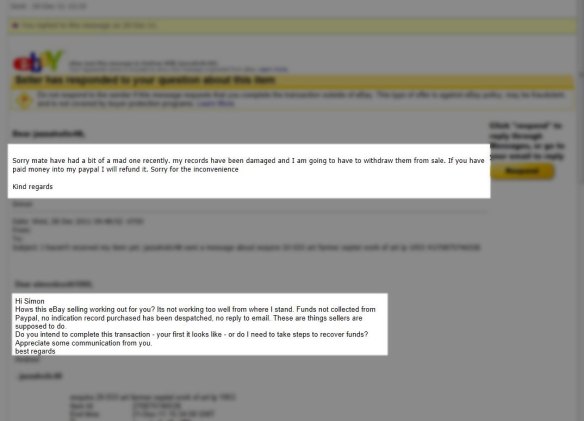 He took the big break, and fell flat on his face. Some people you just can’t help. First basic principle of selling records is do not break them, especially not after you have just sold them to someone else. An eBay auction is a legally binding contract, to buy and to sell.

One day I hope to sell on eBay, but all my friends who have done it give just one word of advice only. “Don’t” The consensus seems to be that buyers are awful. Who, me

customs charges – what is a used record worth?

Its just a lump of old plastic. Is it an original pressing holy grail collectors item? Or just a scratched and dusty disc to hang on a wall as a little retro chic. You know what you paid for it, but what is it worth? Most ebay sellers are content to enter a nominal amount – it means nothing to them but can mean a lot to the buyer in another country, at the mercy of customs officials employed in the postal distribution depot. However one new York seller casually declared the auction price, $170.

The UK threshold for tax on imports is £18 – around $25  declared value. Any more than that and state-sponsored robbery starts – 20% of the declared value “Value Added Tax” (adding value to who exactly?) plus an outrageous £8 /$12 “administration charge” by the Royal Mail for collecting the tax on behalf of the government. Your record is held hostage until you pay

The ugly face of petty administration, chasing pennies.This package from Japan was held up for a week in order to levy a few pounds of “Value Added Tax”. I wrote to them these were second hand records on which VAT did not apply, and value added to whom exactly?

The bureaucracy eventually replied negatively, but I got some small satisfaction knowing they had spent more money collecting and corresponding with me than it was worth.

Ebay now operate a tax imposition practice on final auction prices for cross-border sales, and authorities are known to insist copies of the auction result accompany item posted. An increasing number of sellers say they will declare the full auction price on the customs declaration, to protect their position. One must suspect there is a trade off here, with tax authorities leaning on Ebay with regard to undeclared trader earnings, or sale of counterfeit or stolen property. Why else would Ebay elect to operate as an arm of government Tax Collection Sevices?

A shill bidder is a second account controlled by a seller, used for the purpose of pushing up an auction price, or to insure a record does not sell too cheaply, by winning it for themselves. It is technically against Ebay rules, and Ebay claim to have sophisticated algorithms to detect it, but we all experience it not infrequently.

The telltale marks of shilling is anomalous feedback pattern on a “controlled” account, or a disproportionate percentage of 30-day purchase history  lodged with just the one seller.

Delving into seller feedback can throw up some surprising buying history. 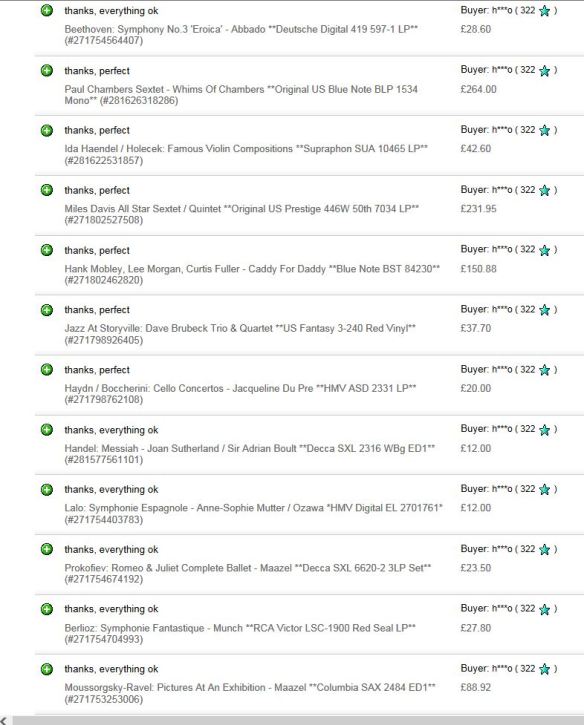 A winners purchase history indicated they placed 50% of their numerous last 30 days bids with the same seller.. There may be a perfectly simple explanation for all of this, but shilling is the most likely.

( UPDATE May 6, 2017: Got scammed again by the same seller, looks like still up to their old tricks – second and third placed bidders “locked” the price high – jacked it up from £35 (genuine bidder) to £90 then £120. One had 100% of all their bids in the last 30 days with that seller, the other 50% of their bids with that seller, clearly captive accounts making sure the record didn’t go too cheaply. Ebay will do nothing about it.)

If you think you have been a victim of shilling, you can report your suspicion to Ebay, but my experience is this is a waste of time, they will do nothing and advise you not to pay, which you have to then risk being declared in default.

In another case, a while back I came across an apparently reputable US seller of jazz records, who in the closing days of December suddenly sold a large number of jazz  LPs- 30 or 40 –  at  many multiples of their market rate, for example,  $300 for a commonly available Jimmy Smith that usually sells for $30. The only possible explanations are some form of money-laundering or year-end tax arrangements or a ruse to artificially inflate their  turnover, the possibilities are endless.

Then there is the famous case of seller Nautiluso, an outwardly respectable trusted seller with many years of good feedback, who one day  disappeared after taking in a few hundred thousand dollars for a collection of ultra-rare and desirable records, which never existed. Many weeks and months passed before the awaited records failed to arrive in the post, and red flags  raised. At times like this you are grateful for the guarantees offered by Ebay, Paypal, and your Credit Card companies.

Most Ebay buyers and sellers are honest, straightforward, and simply enjoying the huge benefits of a worldwide marketplace. But every now and then, not everything is necessarily as it appears. None of these problems should put you off  being a buyer or seller, because there is often no alternative for scarce high value items, where an auction is the only way to realise maximum value for the seller.