Independent authority on aqueous cleaning of vinyl published on line by The Vinyl Press (190 page pdf, free to download, no strings) Third Edition 2022 here. (The LondonJazzCollector formula is referenced on pages 95-6) 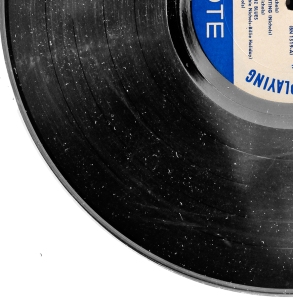 Many of your records may be in much better condition than you think. Whilst nothing will eliminate physical surface damage, you would be surprised how much debris causing surface noise can be removed.  Older records generally have fifty years of accumulated debris and have never had the benefit of proper modern cleaning.

The vinyl grooves of an LP –  close up

To get any closer calls for an electron microscope. These amazing pictures  created by the  optics department at Rochester University give us an intimate look in the vinyl groove.

Along comes Stanley the Stylus riding in the trench, sashaying against the contours in the 45 degree groove wall that are the musical information, sending those physical movements up into the moving coils in the cartridge above to be turned into electrical information destined for amplification. The groove/ stylus sensitivity to generate discernible change in sound  can be as small as 1/1000th of the thickness of a human hair, and everything the stylus hits gets interpreted as information. Any dust or muck in the groove which gets onto the stylus tip reduces it’s reading efficiency, which is why you should clean records before first play.

Some people claim unwanted vinyl surface coatings cause a degree of “muddyness” in the sound, which lifts after cleaning. Beware, superstition is rife in hi fi, and a belief in magic. I ripped a track before and after cleaning. When I A:B’d the two rips you can hear the pop on one  absent on the other. It’s called science– knowledge gained by experimentation, observation and measurement, which can be replicated and used to advantage. It’s not just the preserve of scientists. Ordinary folk can do it too.

The old “dust bug” and “Emitex cloth” mostly merely moved debris around, gathered a little dust which quickly returned. There are  practical ways to improve your listening experience, through ultrasonic or wet/vacuum cleaning which achieves greatly superior results. But you can also make some improvements in noise reduction yourself at little or no cost.

At the outset, we need to separate those problems which we can do something about, and those we can’t.

Not all vinyl  problems can be solved

Some record owners rarely returned the record to its sleeve, leaving them piled in a heap after playing. Poor handling practice and lack of care has left some vinyl records with permanent surface noise

Not all pressing plants operated in a sufficiently  clean environment. Under pressure to improve margins, and win pressing contracts, some plants took to cost-cutting at the expense of quality.  Less than perfect acetates with small flaws were sold more cheaply. Record labels stored in damp warehousing could absorb moisture, and needed to be made bone-dry or released steam during pressing, which caused pressing  imperfections.

Batches of vinylite could be bulked up with a proportion of recycled vinyl containing paper fragments, or the vinyl left-over from trimming edges after pressing.  Even some respectable record companies added cheaper  co-polymer vinyl extender to the raw vinylite – which softened at slightly different temperature, causing tension in vinyl moulding.  Some labels are notorious for “noisy” pressings, few are truly silent.

If they came out of the factory good,  the next problem was record owners. Physical impact damage to grooves caused by heavyweight tone arms being jogged or dropped on the record are the biggest drawbacks  of vintage vinyl  pursuit. The popular portable record player was inherently unstable and prone to scratch vinyl.  The teenage record listening session!

Yet another problem that needed to be avoided is the damage done by storage for  decades in a polythene-lined inner sleeve. Such inner sleeves were popular in the ’60s and eventually ruined records. Over the decades the polythene formed a reaction with vinyl, leaving a thin surface film bonded to the vinyl surface. The first visible sign  is a moire-pattern rippling reflection on the vinyl surface, usually extending beyond the grooves and onto the run-out vinyl land. It doesn’t wash off.  Potentially, the heat generated briefly at the point of contact between stylus and vinyl (thousands of degrees) may transfer molten plastic on to your stylus tip, permanently impairing its performance. There is no solution. Do not buy or play a record with this problem.

Avoid anything which coats the grooves, like LAST “vinyl preservative”, anti-static spray coating or anything claiming to lubricate the groove. There is a school of thought in the hi-fi community that vinyl benefits from lubrication – think engine oil, a false analogy. Any additional material in the groove creates “bad information” which your stylus reads the same way it reads “good information” – the music, and impairs faithful reproduction. You want bare clean grooves, and nothing else in them.

Clicks and pops, (and surface scratches) were one of the vulnerabilities of vinyl that led people in the eighties to follow the technological pied piper of the digital compact disc (The Evil Silver Disk™).  Taking better care of vinyl was maybe was culturally too onerous. Clicks and pops can be remedied, by a proper cleaning process.

First of all, your vinyl cleaning best friend is an LED spotlight, like this clamp positionable light from IKEA, around $15.0. I have one positioned next  to  the turntable.

A directional LED will reveal  everything about the surface of your vinyl, it is ruthless. Dust, paper fibres, white spots, paper-scuffs, fine stylus scratches, and vinyl whitish stains, imperfect vinyl compound mixing, everything.  Once you know that, you can direct your effort in the most useful way.

Your enemy is surface debris, that your stylus tip will strike. Forget the rule of never touching the vinyl groove surface, but wash and dry them thoroughly before setting out. Do a quick finger-trace over the vinyl surface, to dislodge any persistent debris. Gently run clean dry fingers over the grooves in a short brushing motion in the direction of the groove rotation, turning the disc slowly in your hand.  You will see airborne settled dust being swept aside, but this is not what you are after. You will also feel some specks of grit under your touch. I name these “white spots” but there is also dark non-reflective debris you can feel but can’t see.

I photographed this vinyl before cleaning, to highlight the three types of vinyl contamination  – illuminated by an LED spotlight . This album looked spotless under room-light.

The fibres (probably paper fibres from packing material) are harmless, sweep away with a brush. They clog up the stylus tip, eventually generating distortion. Not a good idea to blow the dust off your stylus, due to moisture in your breath. Use a dedicated stylus cleaning fluid (expensive)

Fine dust is settled in the grooves, best lifted with a velvet-pad cleaning brush. I use an “Exstatic” brush for this purpose. Dust is everywhere in the air,  probably not especially harmful. It clings and returns, attracted by static charge . Better to clean it out, it will keep returning, keep it under control.

In addition to the Exstatic gently hold a carbon fibre brush on the spinning disk,  before and after play before returning vinyl to its inner sleeve. Replace your old inner sleeve with a new mylar archive-quality inner sleeve, which protects contact with the vinyl surface from dust, fibres and paper scuffs.

The White Spots are more than ten times or more bigger than grains of fine dust.  If you sweep over the vinyl with an Exstatic velvet pad brush, many  of them will brush away, but a minority persist, stuck in the groove.  Unfortunately, the persistent ones survive even ultrasonic cleaning.

These stuck white spots are the enemy, generate a random click when the stylus hits them. You can feel them under your fingers tips, like a raised piece of grit in the groove. Most will resist a finger-brush but with repeated firm pressure, will break up into powder  Those that really persist, need a poke gently with a fingernail, to push them out.

The odd white spot will not shift. The base of the spot is “welded” in the groove. Probed by fingernail, the top will shear off,  the stylus will ride over the residual base, and stops a hard click.

I don’t know the origin of white spots but they are found on most vintage records – and some fairly new ones. Maybe they are organic, maybe they are accumulated aggregation of fine dust, I don’t know, “naming the cause” doesn’t really matter, they are there, and need to be dealt with.

A few minutes attention to both sides, then ultrasonic or wet/dry clean. This combination manual touch-brushing I have found effective in achieving near-silent playback from records with previously persistent clicks and pops, and that includes “new unplayed records” with pops. Just one or two clicks remain per side.

A record cleaning machine is an essential component of any Hi Fi  and essential for any serious audiophile. These come in the form of manual cheap and simple , through to automated mechanical cleaners.

All records start life with an ultra-thin film of residue “mould release” , a stearic acid compound included in raw vinyl to ensure it’s clean separation from the pressing stamper. Mould release and handling residue need to be “washed away”, which requires some form of liquid cleaning system, enter the record cleaning machine.

The Record Cleaning Machine  – visible evidence of dust and dirt removal by wet and dry RCM. One White Spot resists 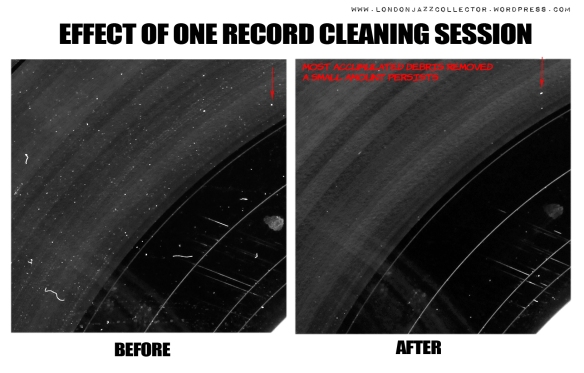 There are numerous machines on offer at different pricepoints and with different methods of operation. For many years I used the Moth Pro from British Audio Products, which is a noisy but  affordable (around the £500 mark) and therefore popular machine compared with more expensive alternatives, but there are many others available. The VPI is also popular, and the Oki Noki, Nitty Gritty.  VPI is similar, Loricraft at around £1500, and there are now the new generation of ultrasonic cleaning machines (Klaudio and Audio Systeme) at around the £2,500 – £4,000 price-point. If cost is not an issue, lucky you, probably ultrasonic is the way to go. For the rest of us, a wet/vacuum system is a practical solution, and nothing is the worst solution.

Wet and Dry RCMs can use which have different cleaning product solutions. A friend who buys mainly new modern records swears by an ethanol-based cleaning fluid (commercial brand Knosti Disco Antistat) which claims to target mould release and static. For vintage vinyl, I recommend an Iso-Propyl Alcohol (IPA) based cleaner, which I find is is more effective in shifting contact soiling and accumulated detritus in the grooves. 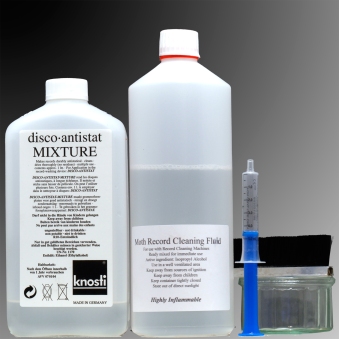 Given the cost of a high-end hi fi in tens of thousands of pounds, and a record collection possibly much more, with your listening pleasure at stake, why would you not invest in an RCM?

Nothing will repair physical damage to the groove, such as scratches, major scuffs, dropped tone-arm, or groove-wear. However, for the undamaged record, a significant reduction in avoidable surface noise can be expected,  improved stylus life, less wear on your records, and much improved enjoyment of your records.