The new “Musicians in the Room” artwork 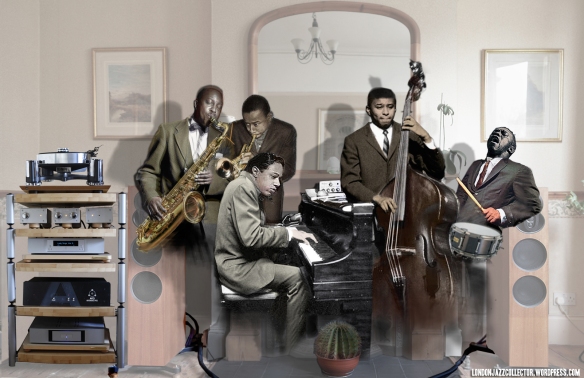 A London suburban home, with musicians in the room –  The Jazz Messengers: musicians long-dead, their genius available only through their recordings. The message of the image is vinyl, which recreates the musicians not just from the speakers, but as physical presence in the room itself, exclusively for you.

Why exclusively? Because due to economics the modern live venue  is often a large concert hall, or worse, an open air festival, with the sound mixed and then pumped into overhead giant speakers, no longer bearing any resemblance to the instrument of origin.  Audiences are mostly the entertainment-seeking evening out crowd. Nothing wrong with that, but a truly hip audience would breathe “yeah”, maybe a polite patter of applause. We know it’s good.

I’ve walked out of several festivaI concerts recently, Hancock, Corea, McLaughlin, dreadful, I gave up. Small intimate settings are a different story, a benchmark which Hifi only aspires to, but since most of the people I listen to are dead, that is never going to happen.  I settle for a front-row seat in an intimate setting in say 1957, which is what vinyl offers.

Below, the original banner with which I launched LondonJazzCollector blog  in August 2011 – a vision which came to me in the early waking hours one morning, and which I struggled to realise that day in Photoshop, with images snatched for many sources online, then blended, toned and colourised in multiple layers until it approximated to the picture in my head.

9 thoughts on “Musicians in the Room”