British Library documents make reference to a relationship between Peter Newbrook/ Carlo Kramer’s label and Decca pressing. At least the first half of Esquire’s catalogue bear the same pressing die marks as other labels known to be pressed by Decca at that time, in the late ’50s. The second half bear pressing die marks that have no known connection,  possibly independent plants of Oriole (Slough and Bucks) before CBS took them over around 1964 – around the time Esquire folded. Or equally possible, still Decca.

Here is the Decca connection:

Not conclusive, but no doubt the exact same dies were used to press these two records. Decca New Malden pressed all London, a Decca-owned subsidiary label. Apart from the first few titles, the outer-rim deep groove appears fairly consistently  on the first fifty Esquire titles, and then on the majority of the next fifty. From 32-100 a different pattern die appears on Esquire, whilst London move to a conventional “Blue Note” style deep groove. Either dies changed, or pressing plants changed, or both

There is only one Esquire title in my 72-strong Esquire collection which is not pressed with US Prestige stampers – 32-157 – Charlie Parker Bird is Free – a recording licensed to Esquire by Charlie Parker Records, the company created by Aubrey Mayhew and Charlie’s widow, Chan Parker, to capitalise on Parker’s only  legacy, his recordings.

This looks like a disparate collection of Parker recordings for which no US metalwork would have existed and certainly not under Prestige’s business. Hence Esquire would have to have had it mastered from tape – by their independent pressing plant. The Esquire catalogue number 32-157 would place it in the final year or two of the label, which ceased at 32-194.

Esquire would almost certainly have used the same pressing plant as all their Prestige titles, which reveals a fairly close match to the matrix format of Oriole, as found on all CBS  post 1965/5  pressings.

It doesn’t follow the house format of the big three majors Philips, EMI and Decca, however it does follow fairly closely if not exactly the format of Oriole at around the time the Parker title would have been pressed. Not an exact match but it comes closer than any othe majors and my theory about Decca just bit the dust

Oriole was at the time probably one of the few UK independent pressing plants, filling its work schedules with Embassy Records chart hits covers for distribution by FW Woolworths, and whatever other work they could get independently of the majors – like for example, Linguaphone language-teaching records, and Carlo Kramer’s Esquire would be a perfect candidate. I am not a big fan of Oriole pressings for CBS, but in the matter of Esquire, they were being supplied with original US stampers. All they had to do was fill them – the hard stuff had already been done in the US.

It is not absolute proof, but it’s enough to convince me – until someone turns up with a better explanation.

My thanks to LJC reader Steve for prodding me to make the connection.

Decca still in the frame. LJC reader Tom kindly sent me a picture of a UK locally mastered Esquire pressing – shown here side by side with a Decca matrix for London Records around the same time 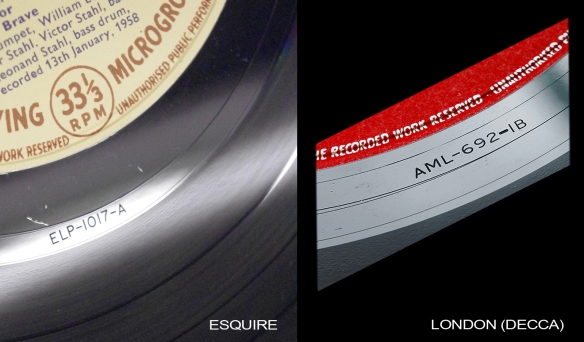 Looks like Decca to me too, despite the absence of an engineer code.  The separation of codes by hyphens, the font (compare the L and 1), the sharpness and  clarity of the depth of the stamp, the use of a Decca-unique code rather than the record catalogue number, it confirms to me Esquire did have a relationship with Decca. The Parker Esquire is less convincingly Decca. The odd angle at which it is positioned smacks Oriole in the early Sixties. (A mid-Fifties Oriole is totally different from all of these)

12 thoughts on “Who pressed Esquire?”