Columbia was one of the major national  labels in the 50’s and 60’s record industry. Unlike small coastal-based independent labels, who shopped around for pressing capacity, or used preferred local plant,  Columbia operated its own facilities for metal parts fabrication, mastering and pressing, using a system of lacquer copy distribution which ensured uniform quality control across several manufacturing centres, and hugely scaleable capacity to support record sales which might be counted in millions.

Though the subject is contentious, Columbia cut multiple lacquers from a master tape mix “simultaneously” and distributed these laquers to their plants, who used these to manufacture metal parts locally (Customatrix Division). At least two laquers were sent to each plant, inexpensive redundancy in case of damage, and not always in an alphabetic sequence.  From the audio-quality point of view,  it is not especially important which plant pressed a Columbia recording, they  all sound basically the same, unlike labels like Liberty, where there are important sonic differences due to different local practices.

As the demand for home-listening grew, Columbia increased pressing capacity. In the early ’60s, Columbia was operating as many as five plants, before finally consolidating down to three:

WB: It was in late March, 1964, that Columbia shut down its Bridgeport plant, transferring all East Coast pressing activities to their newer Pitman, NJ plant that first went into operation in May 1961, closed in March 1981;

The label typesetting associated with Bridgeport would also go to Pitman, though on Columbia, Epic and subsidiary releases, the Linotype fonts would not really reappear on a regular basis until summer 1965. The Pitman plant ceased manufacturing vinyl in 1986-87

Bridgeport and later Pitman used paper labels with Artist, Title and Track names set in Linotype Erbar LT Bold Condensed – shown below is a 1959 KoB promo (with Erbar Light Condensed for comparison). This font set distinguishes Bridgeport/Pitman pressings from those at other Columbia Plants, where other fonts were in use.

WB: “Many have erroneously cited the code “CT” as signifying the Bridgeport plant when, in fact, it was a code for Columbia’s Terre Haute, IN plant (as was ‘CTH’). Back when Columbia was pressing records in Bridgeport, the common abbreviation for the state was ‘Conn.’; ‘CT’ was not used as a state abbreviation until starting in the later 1970’s;

Thereafter, all East Coast pressing was transferred to Pitman, NJ which began some pressing late 1960 and became more fully operational by May 1961. A Billboard article from September of 1963 noted that Columbia was phasing out pressing operations in Bridgeport. Given when the plant finally closed, this wind-down took six months. 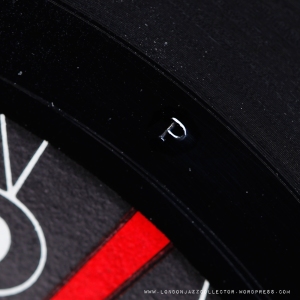 At about the same time Bridgeport ended pressing operations, they also shut down a West Coast plant in Hollywood, CA (on Alden Drive) after a newer plant in Santa Maria, CA (which opened some time in late 1963 and would close in 1981) reached 100% online status in terms of pressing.

Pressings at Terre Haute commonly have a letter “T” hand etched or stamped in the run-out, and in some cases a mother code (A B and C have been seen) and here a stamper count five-bar gate.

Santa Maria plant pressings reportedly carry a letter S in the run out.

The presence of Columbia pressing plant etchings is inconsistent. Around half the Columbia records in my collection have no visible indicator, merely the matrix code, and often an etched stamper count.

However there is one unique Columbia etching, sent to my by Frederik from Stockholm. Seen below on a six-eye mono copy of CL 949, Miles Davis ‘Round About Midnight. My 6-eye mono s pressed at Hollywood, Alden Drive plant (H).) is without this etching. 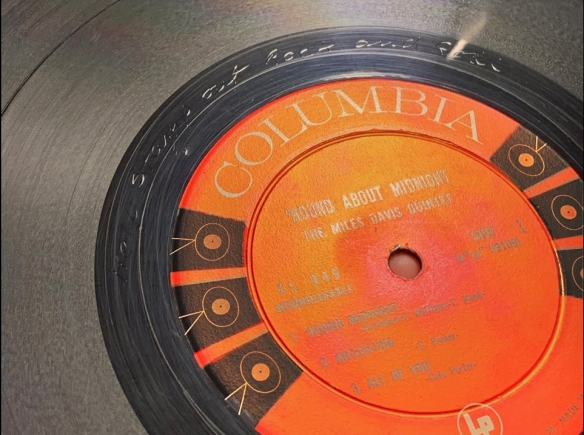 “Help stamp out Rock and Roll

Someone with access to Columbia metal stampers, and a great sense of humour. If you know more, email me.