Down at the 6 o’clock position above the circled “LP” is the “Magic Notes” symbol, a black beamed semi-quaver reversed out on a white circle, which was the registered trademark of Columbia. 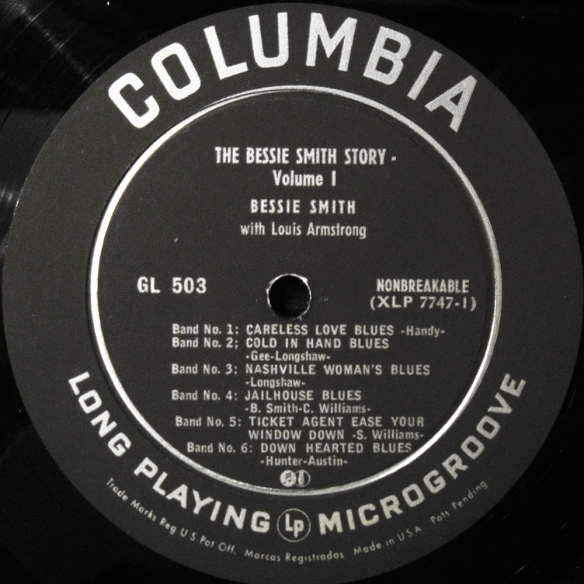 (The Magic Notes symbol was licensed for use in the UK to EMI, hence the  invention in the early ’60s of the CBS label to release Columbia recordings in Europe) 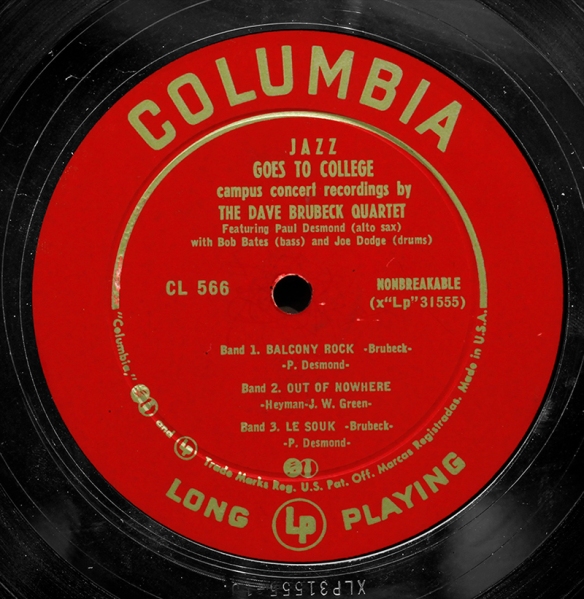 Formal promo labels for mono and stereo, below circa 1959

(examples from Ebay, montage by LJC)

The Magic Notes logo gives way to the “Walking Eye” logo, a design which encompassed records TV and film in its ingenious ambiguity. The design commences with the “Six-Eye”, which is later reduced to two-eye, and finally one-eye, symbolising the more economical rate of eye-consumption in the manufacture of Columbia records. No, really. 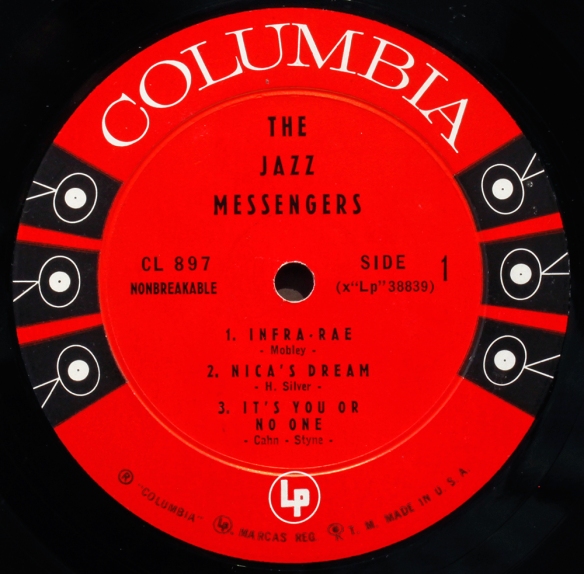 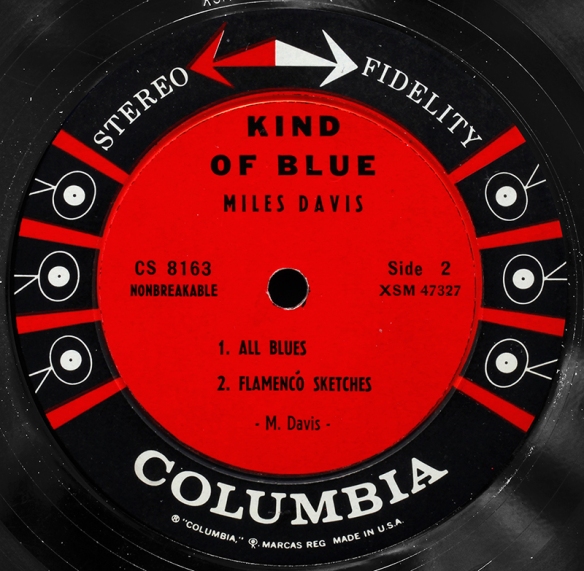 The Six-Eye Columbias were the stars of Fifties audiophile recording engineering and pressing, however, however around 1961 corporate changes at Columbia were signalled by the introduction of the “CBS” name in addition to “Columbia”. To judge from the few samples I have, the CBS Six-Eyes are inferior sonically to the original editions, in the case of my copy of Brubeck’s Time Out below, significantly so..

Usually not DG, though there has been a sighting of CBS with Deep Groove.

Note the CBS overprint now appears, positioned at 12 o’clock. Not deep groove. The matrix confirms the cutting source as tape mix 1.The label says Six-Eye but the turnable says “hmmm…” May be just an end-of-run stamper artefact, but it sounds pretty poor – stodgy bass, blurred piano lacking transients, and Morello’s ringing cymbals all but disappeared. Many labelographies omit the CBS-overprint edition.

Changing times, the classic serif font is replaced and “modernised” by a gothic (sans-serif) font, the legendary Six Eyes reduced two. Two-Eye sound quality remains very much up there with the best, at least US pressings. Europe was saddled with CBS local production after they acquired the  UK Oriole label and its “clapped out” plants. In most cases I have auditioned, Oriole pressings are markedly inferior to both the earlier Philips UK pressings and the US counterparts. 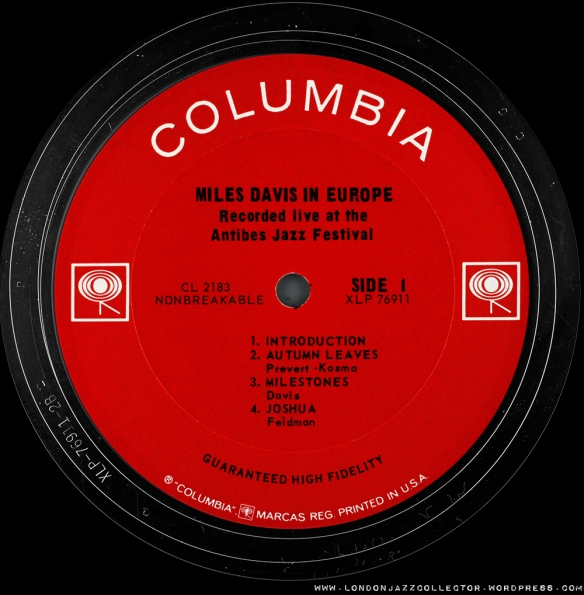 360 Sound stereo with arrows, this copy printed and one assumes pressed in Canada. Interestingly, deep groove.

Initially the “360 SOUND” logo used black type, up until 1963, when it was replaced with white type.

WB Notes: The first two-eye design (on the later CL 1397 pressing, and also CS 8612), lasted from mid-1962 to about summer 1965. However, there were two variants of both “Guaranteed High Fidelity” (set here in Venus Medium, later replaced by mid-’63 with a smaller variant set in Copperplate Gothic Bold Condensed) and the “360 Sound” Stereo (first variant had no arrows, after mid-’63 the “360 Sound’s” were reduced in size and the arrows added on).

The mono version from 1967 onwards is stripped of the white arrows and “360 SOUND” legend, with just the sole word “MONO” in its place.

WB Notes: The “360 Sound” Mono two-eye on the Brubeck “Time In” LP was almost wholly cribbed from the Columbia Masterworks two-eye LP design, except for the positioning of the 360 Sounds and the rim print at bottom. That variant was used from early 1966 to about spring 1967 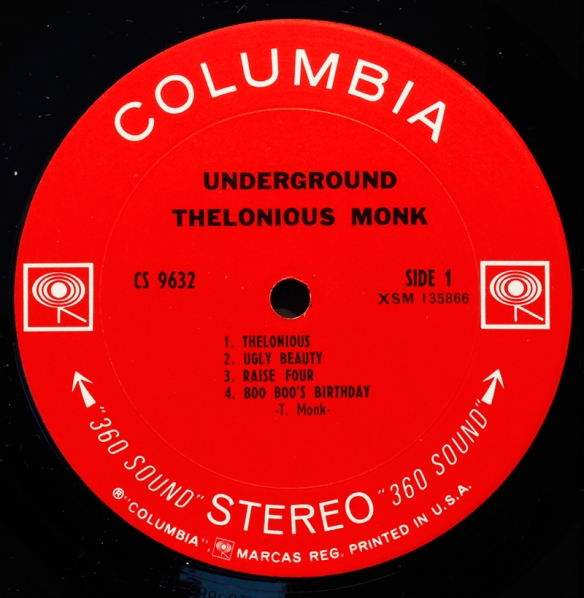 Initially the 360 degree logo used black type. In 1963, the print on both mono and stereo copies was changed to white, and white arrows were added to the stereo logo.

The 360 degree sound was used for both mono and stereo editions up until 1967, when it was dropped from Mono, probably after someone asked the obvious question: how does Mono produce 360 degrees of sound?

WB notes:  (CS 9632) first appeared (with uncoated paper stock in warm red ink) in fall 1967, and switched to glossy paper (with Pantone 199 Red) at the very end of the year. The ‘® “Columbia”,’ and ‘Marcas Reg. Printed in U.S.A.’ as well as the “360 Sound’s” on that variant were all cribbed from the Columbia Masterworks label design. The walking eye at the bottom was a new addition. Anyone who’s seen mono LP pressings from 1967-68 will note that the ‘® “Columbia”, … ” rim print at bottom is positioned slightly differently from on the stereo label.

5. Columbia-all-round – the modern label found on many later reissues 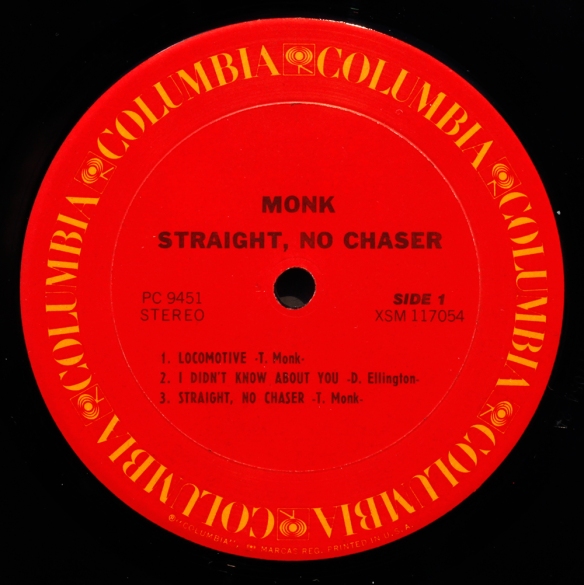 First editions and re-issues  on the “Columbia all round” red label, date from the Seventies onward . This label had a life of probably twenty year or more, and there are some excellent pressings here, as well as some less than stellar transfers, depending on title and over the decades.

Columbia at one time had five plants in operation, over time  consolidated into three: Terre Haute, IN (1953 -1982), Pitman, NJ (1960 – 1986), and  Santa Maria, CA (1963 – 1981). Bridgeport Conn and Hollywood Alden Drive plants transferred into their successor plants Pitman and Santa Maria. With ’60s and ’70s jazz LPs, two of the three are readily identifiable: by trail-off etchings –  “T” and “COLUMBIA NY” – and distinctive font colour, orange – Indiana, and bright yellow – New York. There is no noticeable sonic difference between pressings from Columbia’s different plants (that I can detect). Columbia sent master cuttings for local manufacture to each of their plants, of which one, by definition, was the first cutting.

Though initially I had misgivings about the Columbia-all-round label, revisiting them after a number of turntable upgrades, they are generally very good and astonishing value.The stereo titles are a particularly nice addition to any collection. 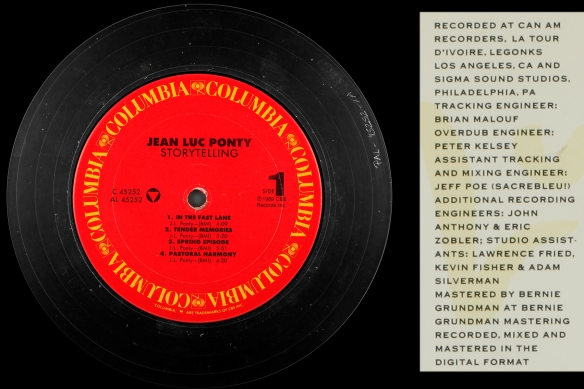 How many Columbia engineers does it take to change a light bulb? This 1989 edition of Jean Luc Ponty’s Storytelling tells a story alright. Eight apparently, or nine if you include the eponymous Bernie Grundman. “More is better” motif (just don’t tell van Gelder) and in digital format “The Future!” ( just don’t tell the audiophile turntable manufacturers). A very ’90s view of the world.

The famed Columbia matrix number machine stamp and its legion of cuttings  has disappeared, replaced by a handwritten matrix code, and the sleeve notes proudly declare this analogue vinyl record has been recorded, mixed and mastered “in the digital format”, an inglorious end to the Columbia legacy.

WB Notes: After the “Columbia Columbia” red/orange label was inaugurated c.June 1970, the two-eyes were consigned solely to deep-catalogue releases, with the last stereo labels used up by fall 1970 – and mono two-eyes continuing to be used well into the spring of 1972 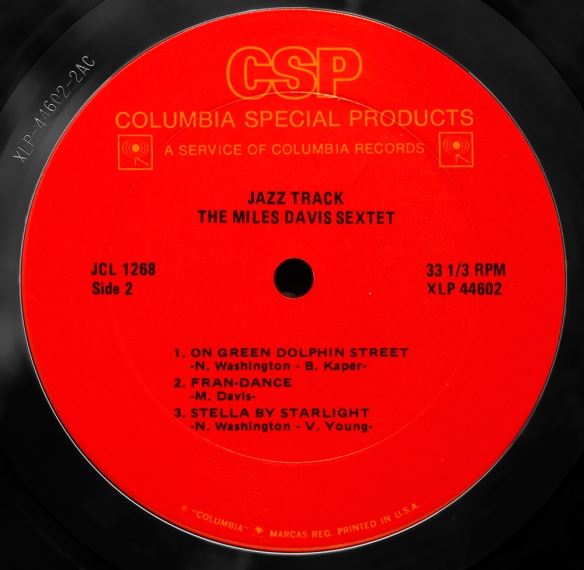 The Special Products service reissues classic recordings still on vinyl. Interesting to note the matrix indicates a second tape mix as source for the master, and the familiar excessive number of lacquer cuttings.

Not strictly a jazz label, the classical “Masterworks” label seems to steer the same course: six-eye, two-eye, and finally Columbia-all-round.  Examples below covering the period 1961 to 1972 .

or go to: Columbia Matrix Codes

At the bottom right corner of Columbia back covers is usually a number. According to the eponymous WB, these identify the following LP cover manufacturers:

Columbia owned pressing plants , with co-located metal parts and plating companies, at East, West and Central US locations. The manufacture of jackets seems to have been delegated to specialist local print and packaging companies. There has to be one or two cover manufacturers located around LA/Hollywood. Beatles fanatic have come up with this map

This suggests the “6” is one of two codes of Imperial Packing Indianapolis, used when suppling covers to the Capitol plant in LA.

“As far as the numbers are concerned, they corresponded to the respective factories from which the covers were produced. Per the Spizer book, on mid-’60’s rainbow label Beatles LP’s #2 indicated Imperial Paper Box Corp., Inc. of Brooklyn, NY, #3 indicated Modern Album of Long Island, NY, #5 was Modern Album of Terre Haute, IN and #6 was Imperial Packing Co., Inc. of Indianapolis, IN. This latter firm may have also been #4 (as on Jacksonville, IL pressings), and later-’60’s Jacksonville pressings also had a #9 which may have come from Modern (IN). Apparently, #2 and #3 were associated with Scranton pressings, with #5 and #6 associated with L.A. pressings. But the numbers themselves were related more to the jacket fabricators.

For many years after that point, Columbia-pressed copies of LP covers with black-and-white print on the back had the following symbols on the lower right-hand side thereof: a heart shape (either black or light grey) for Pitman, N.J.; an “A” designation for Terre Haute, Ind.; and an “S” (either as a letter or as a distorted bold symbol) for Santa Maria, Calif.”

97 thoughts on “Columbia US labels”