Skip to:  the Columbia US Labels

Also see: Lessons from the pressings of Kind Of Blue – Matrix codes. 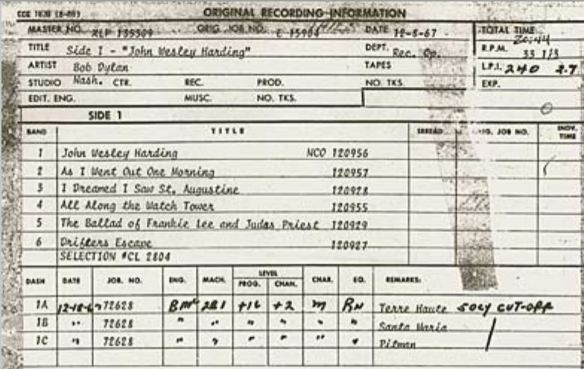 It would appear from evidence of the above tape box dated 1967 that the designation 1A, 1B, and 1C indicates respectively Terre Haute Indiana, Santa Maria CA, and Pitman NJ. Whether this sequence is consistently applied, or just what the engineer picked that day, is not known. Nor does it throw any light on the large number of other codes, but suggests A B and C are equally “first pressings”.

Why so many lacquers?

Columbia needed to supply at least its three US pressing plants – east, west  and centre . Assuming typical industry figures, each lacquer cutting was capable of generating say 8 mothers before quality fell below acceptable, each mother generating 8 stampers, and each stamper pair, say pressed 2,500 records before it was worn out and needed replacing. Doing the maths, one lacquer cutting =  around 150,000 records, three lacquer cuttings gets you close to a half million records.

So why so many lacquer cuttings?  Columbia did cut many more lacquers than they strictly  needed. However the Columbia process provided inexpensive redundancy – multiple lacquers at little cost – at least two pairs to each of three pressing plants – meant any faulty or damaged part could be discarded without interrupting production. Distributing identical lacquers ensured consistent quality from all plants, and production volume could be increased at will. Makes manufacturing process sense, to the disappointment of collectors.

The tell on how a particular record was mass produced is the matrix code/s found on promos.  Promos – usually the earliest pressing –  are found with much later letters than a simple A – B – C.

The matrix number is a process control identifier required to manage the duplication of a large number of intermediary stage lacquers to support long pressing runs. The systems for manufacturing control at Columbia were geared to very large volumes of sales – often millions of units, and very large volumes of titles. Something of a different order of magnitude to the usual jazz pressing run of ten or twenty thousand units for an independent label.

For any record with a very high volume of sales there is no linear relationship like “closer to source is best”. With may be 30 master lacquers cut simultaneously from one source tape, distributed to a number of different plants across the US, and a string of mothers and stampers from each lacquer, and say 2,500  pressings from each stamper, any individual record could be from anywhere in that chain of production.

There is no reason to believe any one master lacquer “sounds better” than another lacquer from the same tape cut around the same time.  Playing the original master tape a dozen times (the engineer and artists probably having already played it many times) does not create loss of information in the way that applying a hundred tons pressure to metal stamper does. The most important determinant of vinyl  audio quality remains the place of a record between the first off a fresh stamper and the last off a worn stamper, the stamper grooves being progressively deformed by pressing repetition.

I am not convinced knowing your copy is from the 35th cutting is of any use to you whatsoever, but at least you now know.

The only indicator of first or early place  in stamper life is the test pressing, and possibly, initial run of promotional copies. Other than this, there is no way of predicting audio quality better than simply listening. The search for that elusive and prized 1A matrix is in my opinion simply “collector lust”, which is an expensive way to feel good, but whatever floats your boat. It’s never wrong to love vinyl. Or to want music to sound better.

Next: The Columbia US Labels