The groove-type found on a Blue Note record offers a useful indication of the probable date of manufacture, and can help confirm or discount the status of a particular copy  being an “original pressing”.

All original Blue Note records manufactured by Plastylite in the 1950s up to late 1961 have a deep groove on both sides of the label central area – the groove being a “trench” around the inner circumference of the label created by the metal die used to hold metal record stampers in place. This applies to both first and subsequent re-pressings during that period.

In Autumn 1961, new dies were introduced at the Plastylite plant, whose residual mark was a single “step” – not a “trench-like” deep groove.  The old DG and new non-DG dies were functionally interchangeable and coexisted for some four years, until the last of the old deep groove dies finally became worn out and discarded, in late 1965. During the four years between 1961 and 1965, original pressings appeared with every combination of die types: both DG, both non-DG, and DG only one side or the other.

The two types of groove are illustrated below: 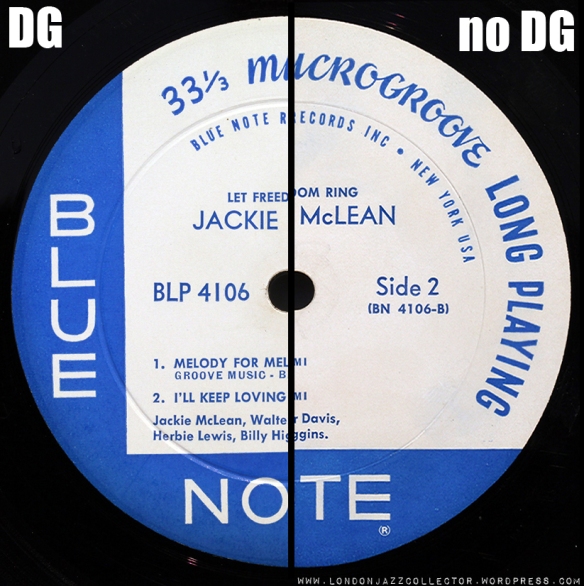 Various collector theories have been offered, about the use of old dies for re-pressings, new dies for new original pressings, but  recollections of a Plastylite press operator at the time was that type of die was of no significance, merely whichever came to hand..

On average, there was a ten month gap between the original recording date and the month of release. For some titles it was as little as 4-6 weeks, most often it was about 3 months, not uncommonly 6 – 9 months, and some titles waited several years. It is most likely that the manufacture of a title was a month or two prior to release, and the groove pattern reflects what was current at the time of release, and not the date of recording or inferred from the catalogue number sequence. The best indicator of the date of manufacture is which of the nine patterns of  inner sleeve the record was packed with..

Deep groove is characteristic of all  first pressings manufactured by Plastylite up to Autumn 1961. Subsequent to that date, pressings appear intermittently with some permutation of groove (both, neither, only one side, however a specific permutation is generally associated with the first pressing of each title. Consult Fred Cohen’s book on identifying first pressings for specific details on all mono releases by Blue Note Records (note, Fred has changed his judgement on a few since publication).

The presence or absence of deep groove is not a guarantee of superior audiophile performance, which is impacted by many other factors. Early pressings suffered more wear and tear over the years. Second and subsequent pressings by Plastylite still employed stampers derived from the same intermediate Van Gelder metalwork, and still sound distinctively “Blue Note”, and are often in better condition. However, sentiment still holds sway over many collectors: they want a piece of history, they want the original.

Date of recording and date of release

How vinyl records were made

To better understand the phenomenon of deep groove, see the LJC Slackers Guide to making records below and gain “Instant Expert” Status.

In only 30 seconds, everything you need to know to become an authority, shaving 30 seconds off the previous instant expert record of the One Minute Manager

Step One – from music to stamper

Music is cut onto a master laquer by lathe. All that important information (catalogue number, master engineer signature) stamped or written is here on the runout area of the soft laquer. Mother/stamper positive/negative metal parts are created. The stamper central area is punched out. Printed paper labels are trimmed and center-punched ready for use. 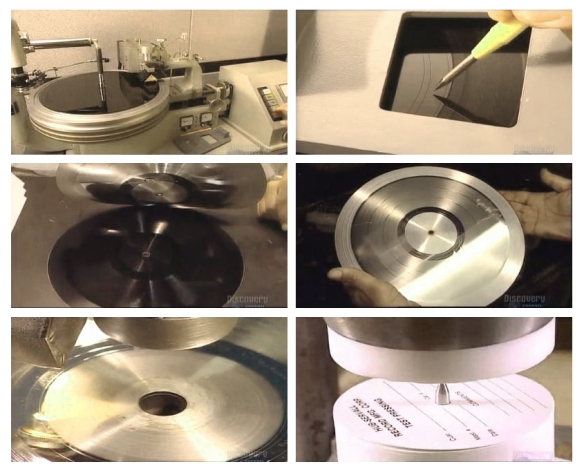 Hot vinyl biscuit is sandwiched by labels, and mounted between a side A and side B stamper. Ensuring the labels were bone dry was critical at this point, as any moisture converts to steam during pressing. The press applies 100 tons pressure to the biscuit at a temperature near 200 C for 30 seconds, pressing the grooves from the stamper image into the vinyl. As the press lifts away from the newly pressed record (bottom right) you see the indentation left behind in the central label area by the metal dies holding the stampers in the press. Deep Groove, or not Deep Groove, this is where it all happened. 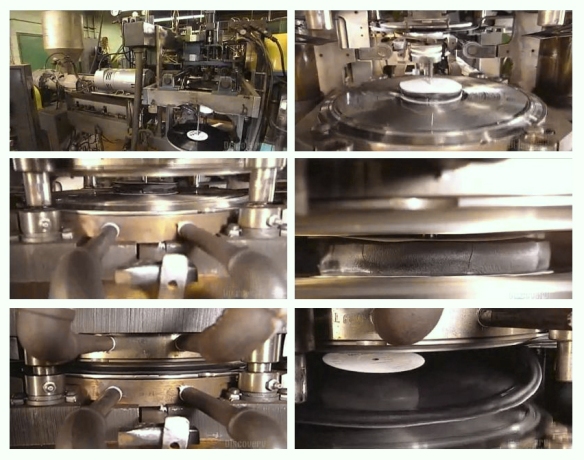 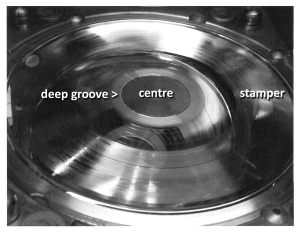 The deep groove has its origins in the pressing 78 r.p.m. records. The deep groove circle is just slightly smaller than the label of a 78, located within the label edge. As the recording and distribution medium switched from the breakable shellac 78 first to the 10″” and then 12″ unbreakable microgroove 33/1/3 LP, with its larger label, the deep groove was incorporated into the design of the new labels. Deep groove remained a feature during this period until pressing plants commissioning new presses to keep up with the expanding demand for vinyl records, phasing out the old presses, and with them, the older deep groove dies.

(Thanks to Cristian for the info on 78 rpm)

Other record labels and the Deep Groove

Deep groove impression is found on many other record labels such as Riverside and Contemporary pressed around this time. There is not as much documented about how these fit into the chronology of other pressing plant processes as there is for Blue Note and the Plastylite vinyl pressing plant. Eight different types of pressing die grooves from late Fifties to early sixties, ranging from Plastylite-like on Contemporary, to deep pudding bowl on Verve 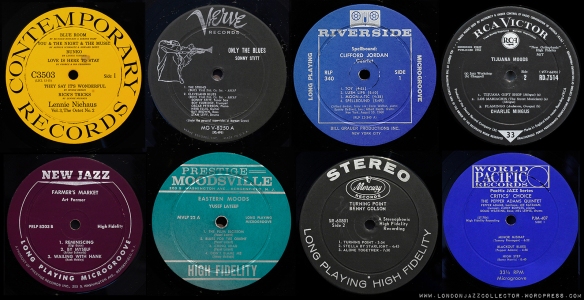 An example of more PPM – pressing plant mayhem – is this interesting “anomaly” on the Prestige label (photo courtesy of Albert of Ohio) of Coltrane’s 1958 recording Black Pearls, first released by Prestige in August 1964. Stereo copies of the original pressing exist with different label designs, one with deep groove, another with no deep groove.

These differences are almost certainly attributed to the spread of manufacture to different plants, who may also have been tasked to print labels locally, hence variations in typesetting, pressing dies, even the use of “out of date” designs. Whilst Blue Note used just one plant, Plastylite (plus one known exception), it became common for some labels to press at two or three plant location, some times contracting pressing to independents for cost advantage.

Anyone with a more serious interest in the subject of pressing die indentations on record labels, I recommend to seek professional help. Or indeed amateur help, such as myself.