Newly pressed records were placed in the inner sleeve at the Plastylite plant, before being shipped in large boxes to Blue Note, to be matched with the outer cover.

Between 1956 and 1960, Blue Note 12″ LP records were packed with a plain paper inner sleeve. This took various forms over time, and pictured below is an example of the last type of plain paper sleeve, from my collection,  accompanying BN 4019, released December 1959. An identical plain sleeve was found accompanied BN 4029 released May 1960. My remaining pre-4050 titles had all been rehoused in later Blue Note, modern generic  or unrelated inner sleeves. 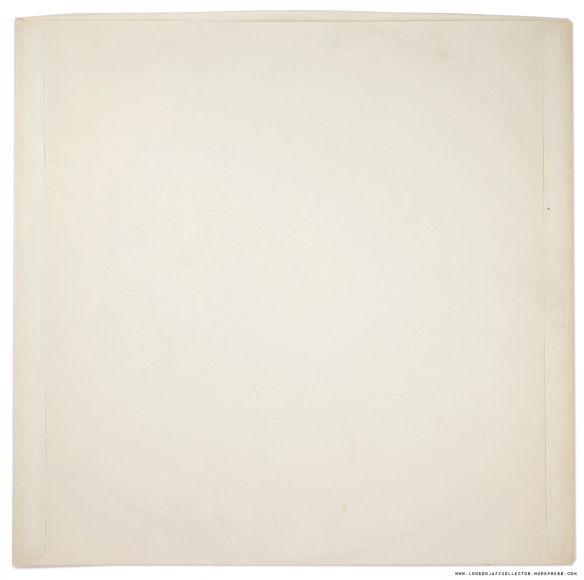 Between 1961 and 1966, Blue Note records were bagged in a  new printed inner sleeve, which promoted 72 current releases,  36 covers pictured each side. The sleeve design changed from time to time, updated for new releases.  Starting in September 1964, these printed sleeves began to carry the  headline “25/ 26/ 27 YEARS BLUE NOTE. Around half of Blue Note’s catalogue of 350 titles were released with a  picture inner sleeve,  found on both new title and repressings in that period.

In the Summer of 1966, with the purchase of Blue Note Records Inc., a large stock of  the last design,”27 YEARS BLUE NOTE”,  came into the hands of Liberty, and this last inner sleeve was used with early Liberty  pressings of Blue Note records until late 1967.

Despite the limitation of sleeves being sometimes missing, and the possibility of being swapped with that of other records, the “correct” Blue Note inner sleeve can be helpful in confirming the provenance of a Blue Note record as an original pressing, particularly important in a premium price auction, where a record may have been repressed many times, and the “wrong” inner is a warning flag.

LPs were bagged after pressing.  A particular title, pressed at a particular time, should have the inner sleeve design that was in use at that time.  Similarly, a later subsequent pressing, at a later time, will have  been bagged in a later inner sleeve. Effectively, the inner sleeve is a “date stamp” of manufacture sometimes narrowing  it to as little as to a three or four month period, compared to the ubiquitous NY label, which was in continuous use for four years.

Fred Cohen’s Guide to Blue Note First Pressings  identifies nine unique  inner sleeve designs. Each sleeve design, front and back, displays a 6 x 6 grid of Blue Note releases , 72 titles in total.  Among the 36 covers pictured on the address-bearing side  is one unique record title which does not appear on any of the other inner sleeve designs. The unique title, which identifies each of the nine designs,  is in a different grid position (column and row) on each design.

Each inner sleeve design is linked to a pressing run of Blue Note titles being prepared for release. Titles were often released out of catalogue number order, some by several years. At best, a recording took 3 to 6 months to prepare for release, and more typically a year after being allocated a catalogue number. The timing of release was the province of Blue Note boss Alfred Lion, who reckoned to give popular artists two albums a year, six months apart. Often the musicians recorded at at one pace, Lion released at  different pace.

Schwann Catalogues (unfortunately, not an online resource) give the official release month of each Blue Note title, hence identifying the approximate dates that sleeve was in use, and the likely date it left Plastylite probably a month before official release.

Cheat Sheet “catalogue numbers in range” – between highest and lowest for that Sleeve Type. See full table for specific titles.

Between 1962-6, several hundred  new titles were released and thousands of copies  re-pressed. The Blue Note NY label remained a constant over the four years, but there were  nine changes of inner sleeve design during those four years. You may think you have the 1962 “original” pressing, but what if has a late 1964 inner?

When I went through all my Blue Notes, the first thing I noticed was a number of Blue Notes dating from the time when sleeves were plain, that a seller had added a Blue Note picture inner sleeve to make it look “more authentically Blue Note”. Many titles, ones I thought to bean  original,  had a wrong inner sleeve and almost always a wrong later sleeve.

There are four basic headings- the undated, and the annual dated 25 – 26 – 27 years. However the undated has four unique variations, and the 27 years two, accounting for nine unique designs.

Inner sleeve vs label on record

Much store is set by collectors on a Blue Note title bearing the correct record label design/address of  its original release  i.e. 47 West 63rd with or without ®, NY etc  However we know labels were printed in batches (by Keystone Printed Specialties, Scranton PA) and after the initial pressing run of a title, a stock of any surplus  labels held in inventory for use on further pressings and re-pressings of that title.  The presence of an “original label” on a record is not proof it is from the original pressing run, and in some cases, it conceals a later pressing.

Over the last five decades many inner sleeves have parted company with the vinyl, but where it is still present, it is a potentially useful indicator of provenance.

Evidence from a Blue Note Collector

Around half in my Blue Note collection have a picture inner sleeve, but very few had the “correct” first release sleeve. I found a disproportionate number of records with  inner sleeves later than that of the original release. The mismatches were not “random”, which would have suggested accidental mixing up, they were almost always later inners.

We know thanks to reader Larry C who worked as a press operator  at Plastylite at that time that Blue Note pressing runs were in small batches, and paired with the inner sleeve current at the time. There is some evidence to suggest the total  first pressing runs for a typical a Blue Note title was about 2,500, to possibly 4,000. (evidence: photo of Lee Morgan in the stockroom surrounded by boxes of numbered Blue Note titles shipped in from Plastylite, record in inner sleeve, waiting jackets)

Further copies were pressed according to sales, which would explain the appearance of later inner sleeves on popular records

As per Fred Cohen’s  guide, there are nine inner sleeve variations. Each design is identified by one unique record cover among the 36 covers pictured each side, in a specific column and row position. The unique cover picture is on the side of the sleeve which has the blue note address at the foot. Record sellers please note – only the side with the address at the bottom can identify the design. The side without the address contains no helpful information, neither does a photo showing the banner top of the inner sleeve peeking out of the cover.

The first five inner sleeve designs are simply headed BLUE NOTE, The Finest In Jazz Since 1939. (with no mention of cumulative years since 1939) Of the other for, there is one 25 Years and 26 Years, and two different 27 Years.

Cohen lists a range of catalogue numbers for each design, less exception plus additions. I have translated this into a simple  list of catalogue numbers, in numerical order, indicating the associated sleeve. When you observe the number of sleeves out of catalogue sequence, you are witnessing the real chronology of the Blue Note release schedule, and Alfred  Lion’s  judgement on who to release, when.

The sleeves, in detail: 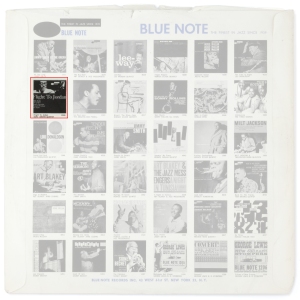 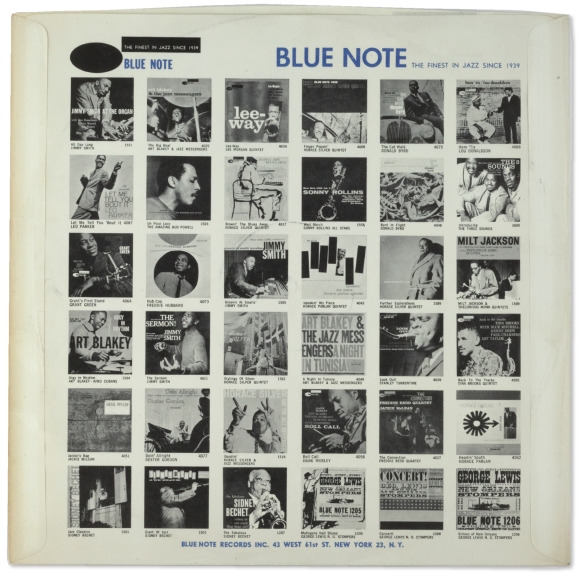 Sleeve 3: Releases between May and November 1962 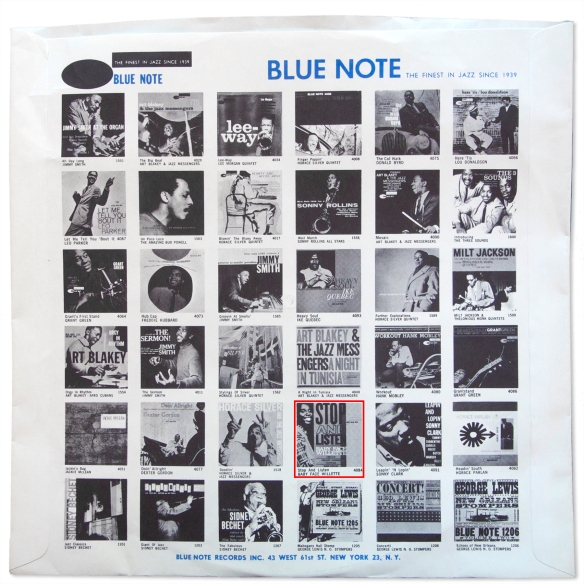 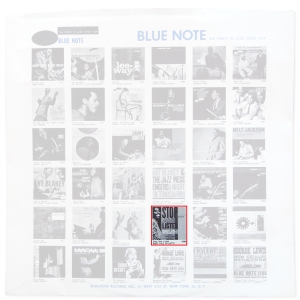 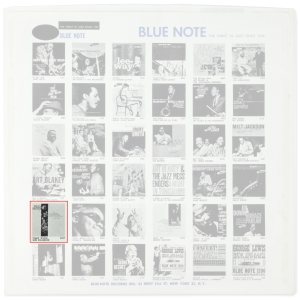 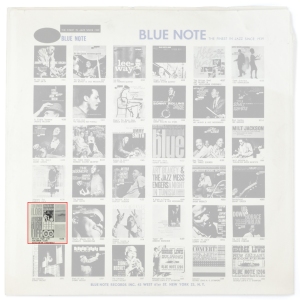 First mention of cumulative number of years, since 1939. 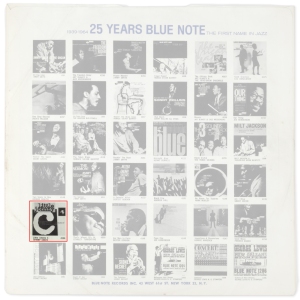 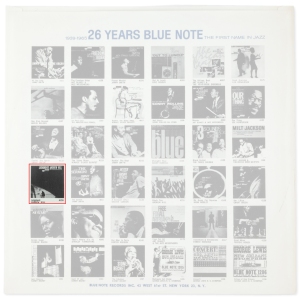 Only a handful of these titles are associated with Plastylite era Blue Notes. Most are found on All-Disc pressings for Liberty, which includes the 35 deferred first releases by Liberty . 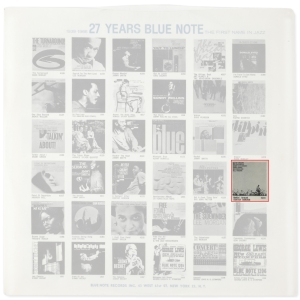 Inner sleeve of The Liberty Years

As a reference source, these are all the non-Plastylite Blue Note pressings listed by their place in the Liberty release schedule, all up to November 1967 have the lastBlue Note  27 years inner sleeve.

After The 27 years  stock was used up, towards the end of 1966, Liberty produced their own corporate inner sleeve, Liberty: The First Family Of Recorded Entertainment.

This sleeve had just the one design, and was not updated seasonally with new releases.

A further inner sleeve design The Definitive Catalogue, appeared, probably around last quarter 1971 (hat tip René). It lists all of the new titles issued by Liberty as well as back catalogue reissues,  the full  catalogue of around 400 titles :

The wallpaper inner sleeve was used up to the 1980 take over by EMI, who replaced it with the “Blue Note Story” inner sleeve. The EMI sleeve gives an illuminating history of Blue Note written by Michael Cuscuna. 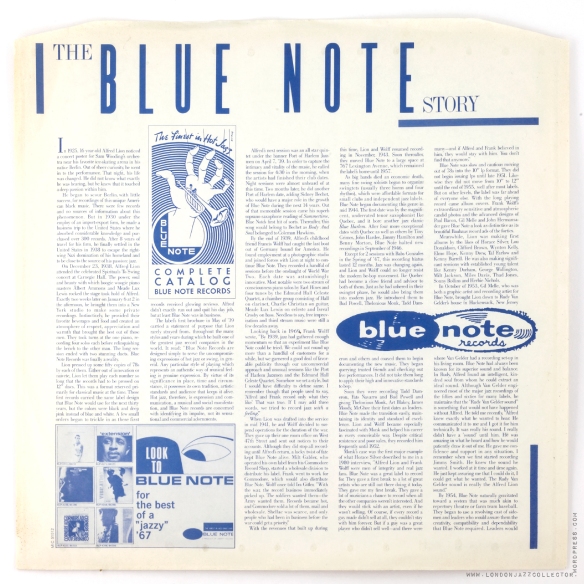 Sadly, EMI Capitol Manhatten  pressings in the mid-80’s which accompany this inner sleeve – label: “The Finest In Jazz Since 1939” –  are often  Direct Metal Mastering (DMM) and are generally  best avoided, though as always there are exceptions.