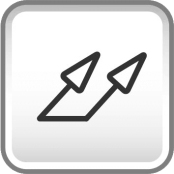 The vocabulary of “run-out grooves” is not well established. After the music grooves have finished, a “run-out groove” leads the tonearm across the blank vinyl land towards the centre label, by means of the run-out groove.. Usually within two or three rotations it terminates in a “lock-groove”, which permits the disc to keep spinning with the stylus in a circular holding  pattern, without running onto the paper centre label.

The first run-out pattern  cut by Van Gelder’s lathe ( most of the 1500 series) was an off-centre lock groove, see examples 1542, 1567 and 1577 below. The off-centre trajectory of the groove caused the tonearm to sway gently from side to side as the disk rotates.

1586, Jimmy Smith Groovin’ at Smalls Paradise, which was mastered about January/ February 1958, shows a different pattern of lock groove, no off-centre elliptical path, but with two bands circling the centre label. 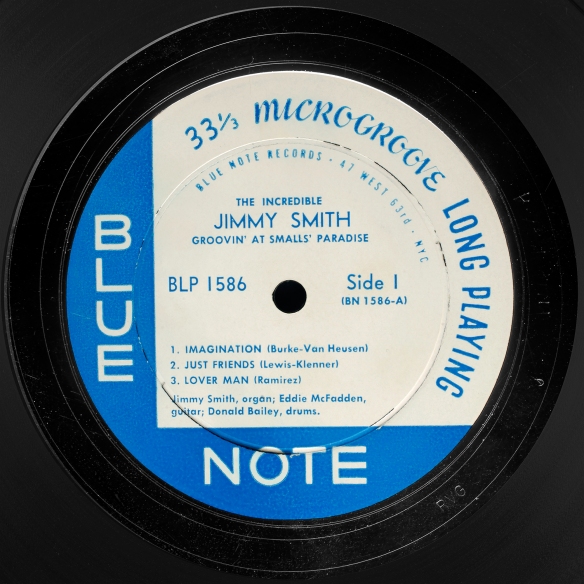 A short time later, likely in March 1958, around Blue Note 1590, Van Gelder adopted a new pattern for the lock groove, terminating in three close-set concentric circles. . Illustrated below on 1595, the characteristic three-ring lock groove. This pattern was to remain consistent feature of Van Gelder mastered discs over the next eight years 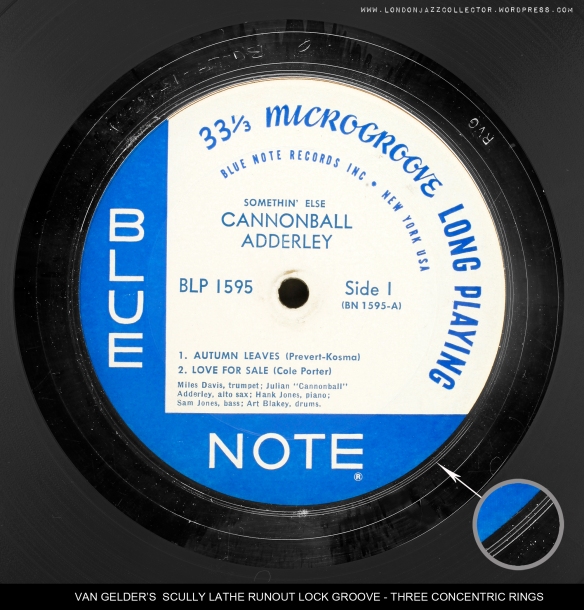 The  three ring  groove appears continuously from early/mid 1958  through to 1966, both mono and stereo, and where original Van Gelder metal was used, remains a feature of reissues by Liberty and United Artists . Seen below, examples from late 1500 series and 4000 series,all have the same three ring final groove. 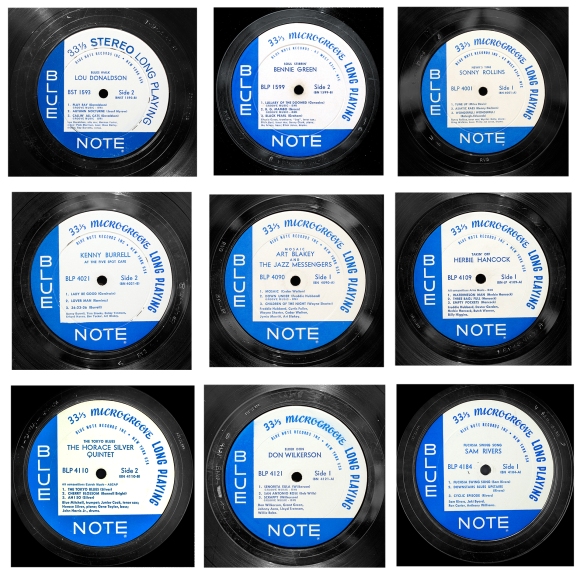 The run-out groove pattern clearly distinguishes Van Gelder masters from mastering by other engineers and studios.

A stereo edition of4001  Newk’s Time was not issued by Blue Note – the first stereo was this edition by Liberty. The label is printed by Bert Co, characteristic “SIDE” capitalised, and mal-formed ® below NOTE, lacking its outer circle. The Van Gelder stamp is not present in the run-out, indicating it is remastered by another engineer. The trail-off groove cut by their lathe has the “wrong”final  pattern – absent Van Gelder’s signature three-ring lock groove. 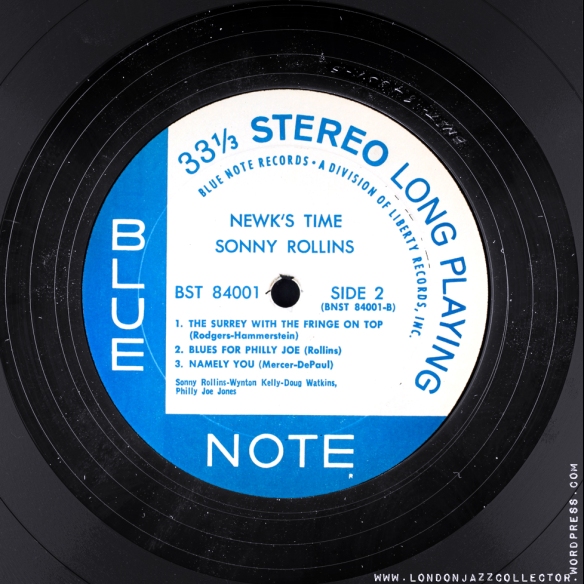 A final diagnostic to distinguish true from fake Blue Note is the radius of the blank vinyl land between the final music groove and the paper centre label of the original pressing. Any copy pressed with original metal will have the same width of vinyl land, as per the original acetate. Vinyl acetate mastering lathes generally have variable pitch adjustment, to accommodate the different loudness of different recordings. A remastered edition on a different lathe will most likely have a slightly different measurement, as a result of a different chosen groove-width setting.  The playing time will be identical, but a groove-width set wider or narrower than Van Gelder’s original groove width setting will use more or less of the acetate surface area for the music and leave a different amount of blank vinyl land remeining to accommodate the run-out groove.

In the example below, despite having identical playing time to the original, the suspect disc had 20% narrower vinyl land than the original, as well as a very doubtful looking Plastylite “ear”, which set alarm bells ringing. 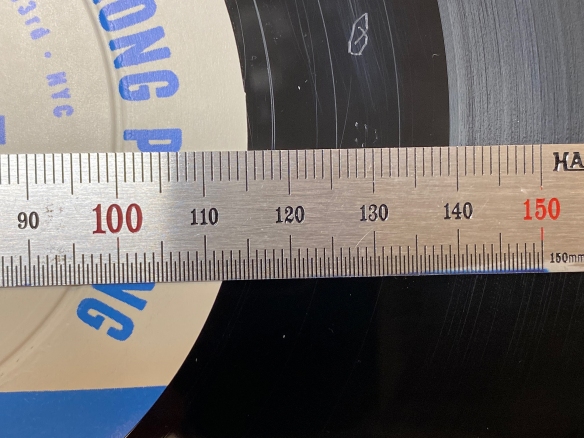 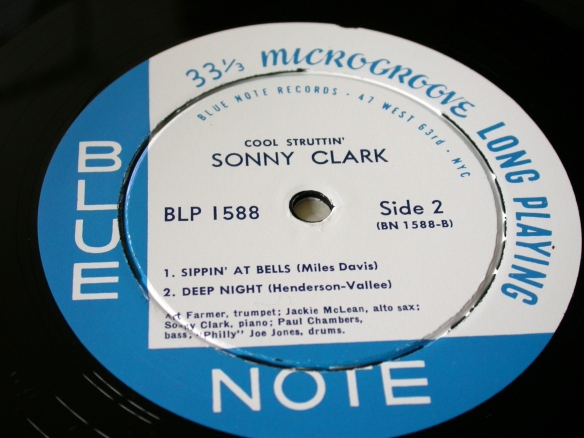 The reproduction below of 1577, Coltrane’s Blue Train, looks very convincing.  It could pass for an original copy but for two small giveaways. First, as in the reproduction of 1588 above,  the facsimile centre label (no INC or ®, nice detail) has been pressed into a reproduction deep groove, but the overly-sharp edge of the groove has torn a section of the label, exposing the black vinyl underneath.

Second,and most telling, the run-out groove is missing the characteristic off-centre elliptical lock groove found on the original pressing of 1577. No-one thought to replicate the side to side swaying of the tonearm at the end of play. There is detail, and there is detail. Nice try though. 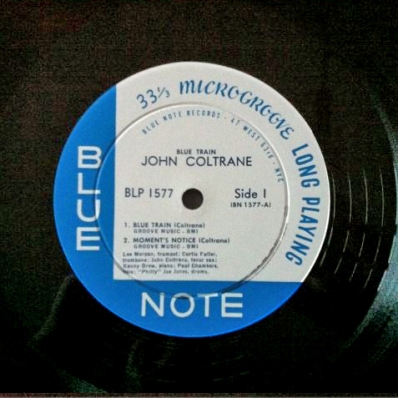 The true Vinyl Detective observes everything, nothing escapes his steely gaze. It is all in the detail, if you know what to look for.