The hallmark of a Rudy Van Gelder master is the presence of his name or initials in the vinyl land between the grooves and the record label, variously described as the deadwax, runout or trail-off.

Stereo masters had their own stamp to differentiate them from mono masters: 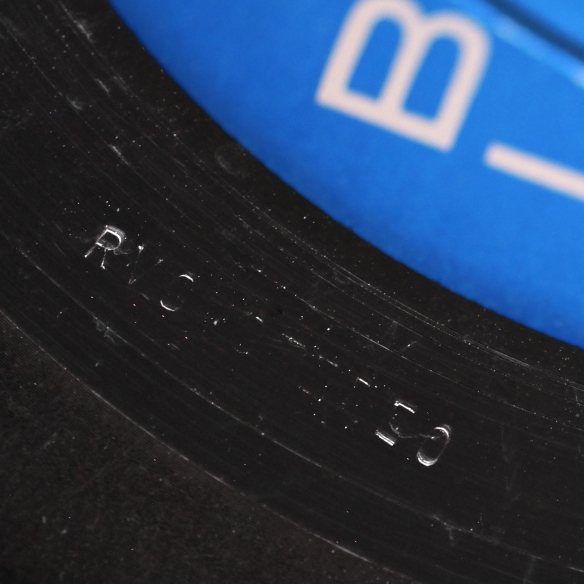 A similar stamp was sometimes added to distringuish the tereo master from the mono:

The Van Gelder etching or stamp was applied on the master acetate, and replicates during the various stages of metalwork through to the final stamper. It indicates the mastering was carried out by Van Gelder. It does not confirm him as recording engineer, which is a different enterprise, and a number of early Blue Notes are RVG-mastered but recorded some years previously in radio station studios, but re-mastered by Van Gelder.   Its absence means the master has been created by other, usually lesser talents..

Since all Blue Notes (with some rare exceptions) were pressed by Plastylite, the Plastylite ear and the signature Van Gelder metalwork go together during the life of the original company, up to April 1966. Beyond that date, subsequent owners of the Blue Note label – Liberty and United Artists –   moved pressing to a wide range of plants, however Van Gelder metal remained in use for some titles.

Van Gelder-mastered stampers continued to be used during the Liberty and United Artists, in some cases beyond their useful life. Also, Van Gelder was not the only great sound engineer, and the quality of his tape mixes was often so high it was difficult for another engineer to make a poor transfer, though some did.

Similar hallmarkings are found on Van Gelder’s work for other labels, notably Prestige and Impulse and as Rudolf reminds me, also Debut and Savoy.

This stamp is found on some titles for Mosaic, Uptown, and a few other labels. Though his association with Blue Note was long gone, his Englewood Cliffs recording studio continued to be a sought after, and guaranteed work for Van Gelder. However, by the early  80s the lead Van Gelder  had enjoyed over most other engineers in previous decades had narrowed. What had been cutting edge use of microphones and recording equipment in the ’50s and ’60s suffered in industry convergence to the mean – every studio had similar multi-track facilities, solid state equipment had replaced valves, and shortly the Evil Silver Disc would replace vinyl as a medium of music distribution.  The magic is often no longer present with “MASTER BY – VAN GELDER”.

In closing, Van Gelder would return to Blue Note in the ’90s by remastering his recordings for CD.

Not everything is as it appears. The Blue Note title below was manufactured in Taiwan, and appears to have an “RVG STEREO” stamp, and “original” etched matrix number. 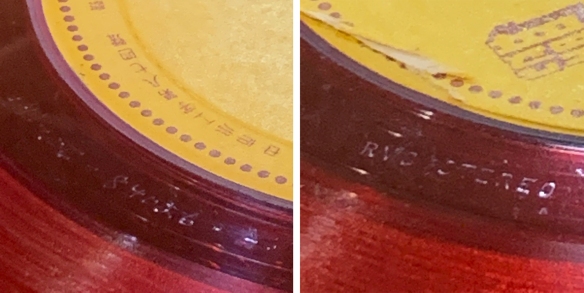 Photo courtesy of Evan B

These South and East East Asia “Blue Notes” are reckoned to be from the late ’60s possibly 70’s, and are almost certainly ingenious counterfeits. The apparent presence of “original” run-out etchings and stamps are not linked as it might appear, with original Van Gelder metalware. More likely they would be an incidental  by-product of  using an original Blue Note record as a mould, not unlike an “acetate”/master,  to press a reverse image “mother” and subsequent  stampers  to press passable counterfeit copies.

Audio quality would suffer in the process, as owners have confirmed, questionable, though an audio sample sent me by the owner of this “Simmy Smith” album actually sounded  quite perky. I think the giveaway is the presence of the Plastylite ear. This record has never been within a thousand miles of the Plastylite plant, the only place it was applied. It’s a counterfeit, Blue Not.

If you see other examples, send to me.