Prestige Records had a number of licensing agreements to distribute Prestige recordings simultaneously in Europe. Much of the Prestige catalogue of the 50s and 60s  are to be found in local country versions, with alternative covers printed in local language, often alternative cover artwork. Uniquely, some European versions were pressed with US-originating  stampers (Esquire, Metronome, Artone known examples), hence they are effectively indistinguishable from US pressings, sharing the same master and mother metalwork. Some specific titles are preferred over the US pressing.

Note the AB engraving in the run-out – indicating it was pressed from US -supplied stampers from Prestiges main pressing plant, Abbey Manufacturing Company. 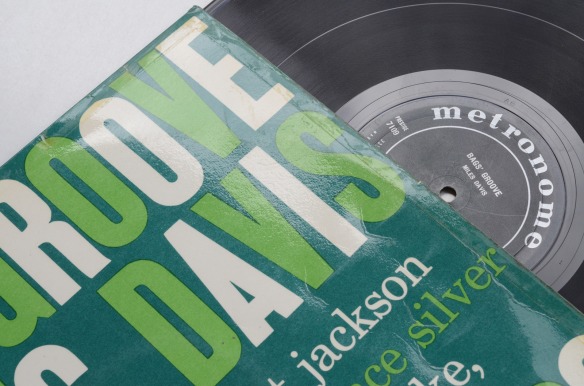 Sixties design change to second Metronome label, still pressed from original US metalwork – RVG stamp and faint Abbey Mfg. AB etching, though note of caution, this title is original metal only Side 1, Side 2 is locally re-mastered with no original etchings. Expediency rules, perhaps Side 2 was lost or damaged, whatever. 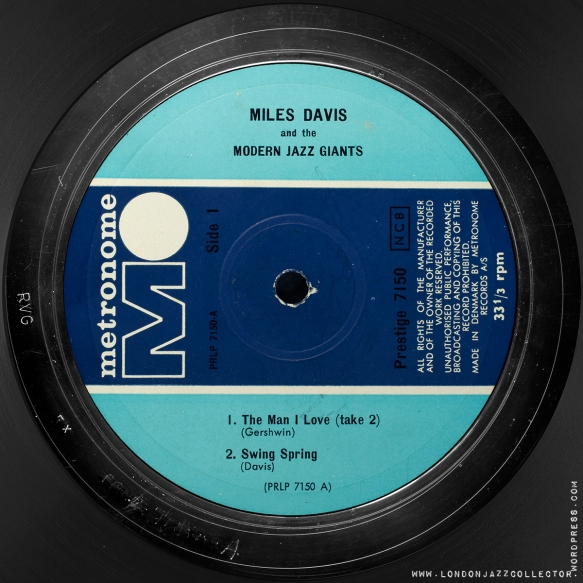 A full listing of known Prestige Metronome editions is here, courtesy of Rudolf 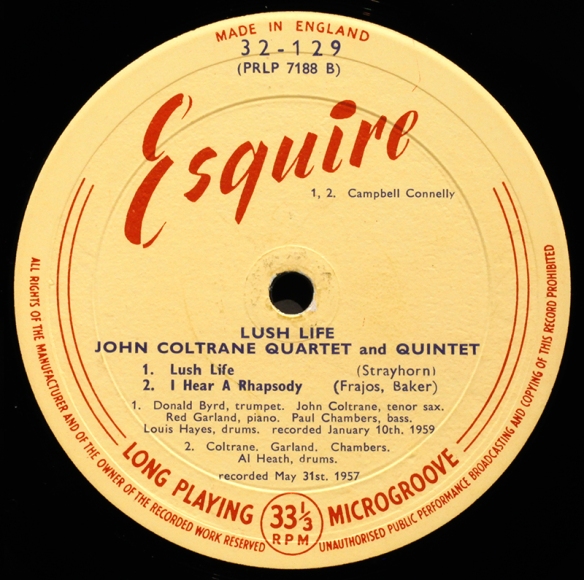 More on the Esquire page

EMI (Evil Music Industries) introduced the short-lived Stateside label to release US Prestige and other jazz  recordings under license in the UK. From the date of production (1964) EMI was successor organisation to the failed Esquire, before Prestige it was eventually taken on by Transatlantic around 1967.

With their own gant engineering and pressing facilities in Hayes Middlesex, EMI would have been very comfortable with remastering and dispense with US-supplied stampers.

From around the mid-Sixties, Nat Joseph’s Transatlantic label took over the license to release Prestige in the UK from the defunct Esquire label and EMI. Transatlantic did not use US mastered stampers, but worked from copy tapes to make their own pressings. For reasons that are unclear to me, as well as the white/purple above, Transatlantic also used the “XTRA” label shown below. Pressing quality also excellent. 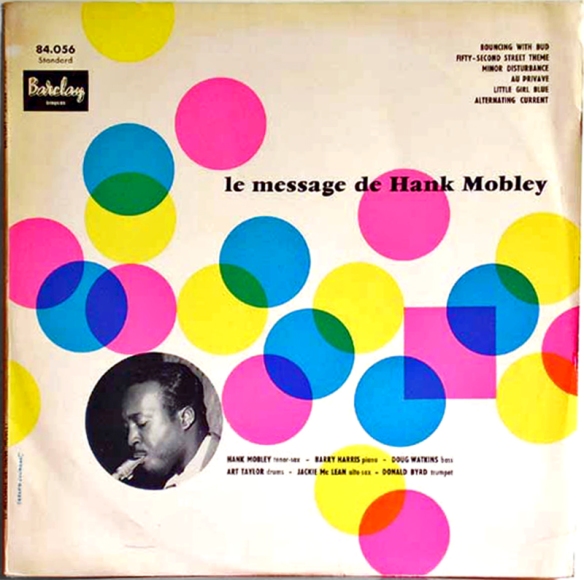 Music Depositato are extremely rare; there being only two or three sold according to Popsike: Below is another where you can see some of the label design. 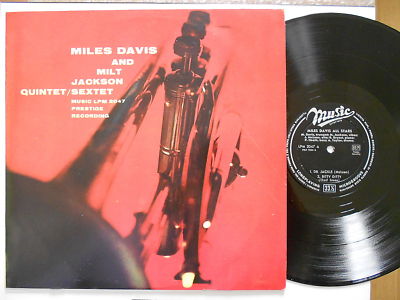 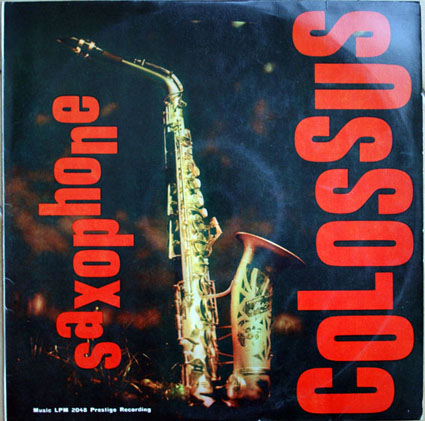 SABA, the predecessory of BASF/ MPS,released Prestige in Germany in the late 50s-early 60’s. Seen below, the purple SABA/Prestige label, in this case a stereo recording remastered locally and not from Prestige stampers 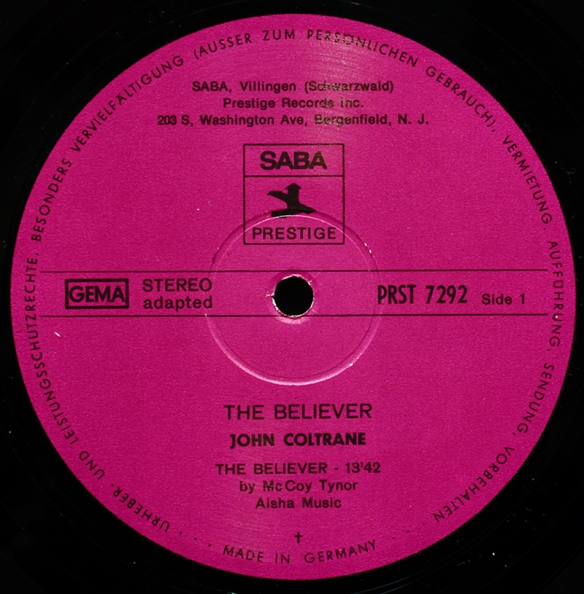 Alternative cover to go with a purple SABA label 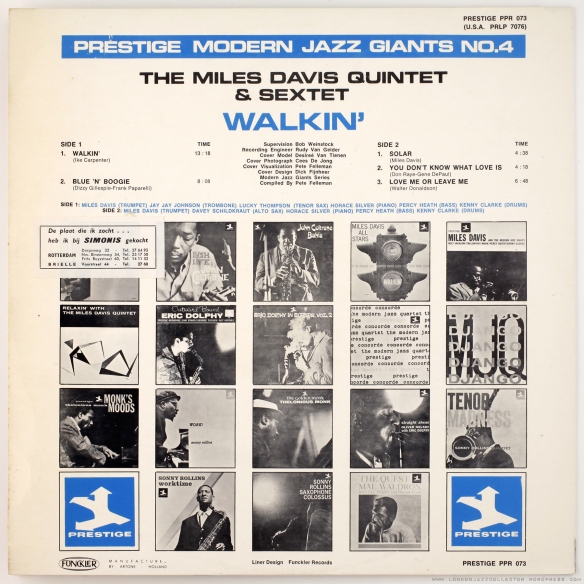 Funkler Records take the blame for the cover, model  plus a photographer, a visualiser, and a designer. The cover construction has open seams on three sides. Origami it’s not.

As contemporaneous 1st releases in Europe, Esquire and Metronome are the “blue blood” lineage of Prestige . As the samples below of Dolphy Outward Bound show, Artone are more of a mixed bag.

It looks like both have been pressed with stampers or mothers supplied directly from the US. The Esquire 32-123 is taken from the 1960 first issue of Outward Bound, NJLP 8236.

The Artone is taken from the Prestige reissue of Outward bound from 1964, PR 7311. The  RVG Master is the same in each case, however with the Artone, updated with the second issue catalogue number .

European edition modern reissues of Prestige recordings, like the German pressing below. Sadly, not even the famous quality of German engineering can make anything of these flat thin sounding records, which have the characteristic of a digital transfer at some point not close to the source tapes, if they still exist.

If you have any Prestige European pressings, you would be very welcome to add to this limited selection by emailing a presentable photo of the label (800 x 800 pixel or higher) to the email address at the foot of the “ABOUT” page. Full credit given,  thanks.

21 thoughts on “Prestige in Europe”