It wasn’t “trivia” to them, it was deady serious – what you might call The Ex-Factor.

First, those favourite jazz musicians from the Bop era who have swelled the ranks of the great Trio in the Sky, listed by how long they were with us, before bad drugs, bad driving, wronged women and poorly controlled medical conditions all took their deadly toll.

And those noted Jazz Musicians from the Fifties and Sixties who are still going strong, with us in 2011 (updated 3/2012): 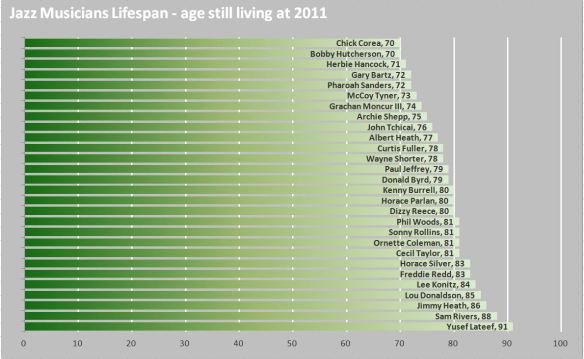 Suprising who outlived their peers, and many of them are still playing – though an encounter with one at a jazz festival the other year prompted unkind thoughts whether this was a good thing. After a brief appeal about hope and change, and world togetherness, the band struck up John Lennon’s “Imagine”,  and I was forced to make an excuse and leave. His best work remains solidly in the Blue Note Catalogue, (Yes you, Herbie!)

Given all these musicians still living will have consumed vast quantiities of secondary cigarette smoke in jazz clubs, night after night, over thirty or more years, it says very little for the associated health risk of passive smoking. Personally I worry more about the effects of passive drinking.