Start with Chapter One below, or jump to: :

Guide to the Contemporary Records labels 1955-84 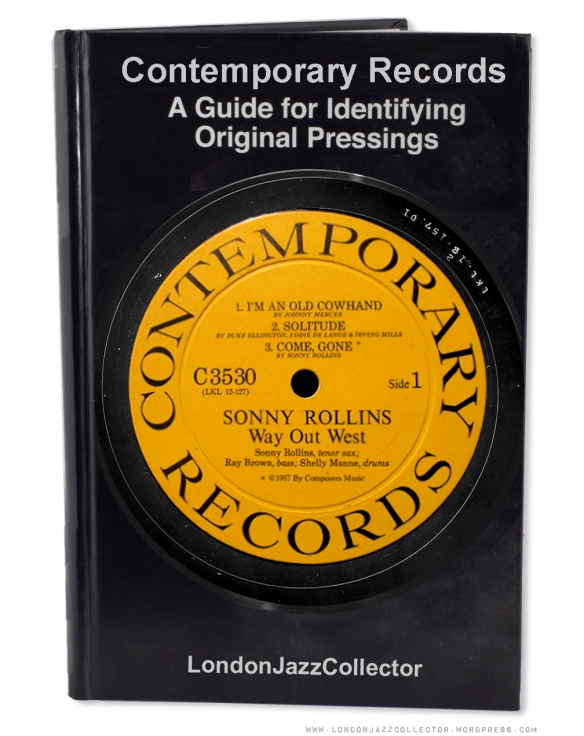 Contemporary recordings were reissued many times over several decades. This guide is intended to help distinguish original pressings from second and later reissues.

Contemporary always provide the date of the  original recording session, and the year of  copyright assertion, but nothing regarding date of manufacture (save for a very few titles at the end of the ’60s and early ’70s).  The absence of year of manufacture often leads to the use of the copyright date from the liner notes e.g. ©1959 in Discogs entries. The year of copyright © remained constant through decades of re-issues and does not indicate year of manufacture. 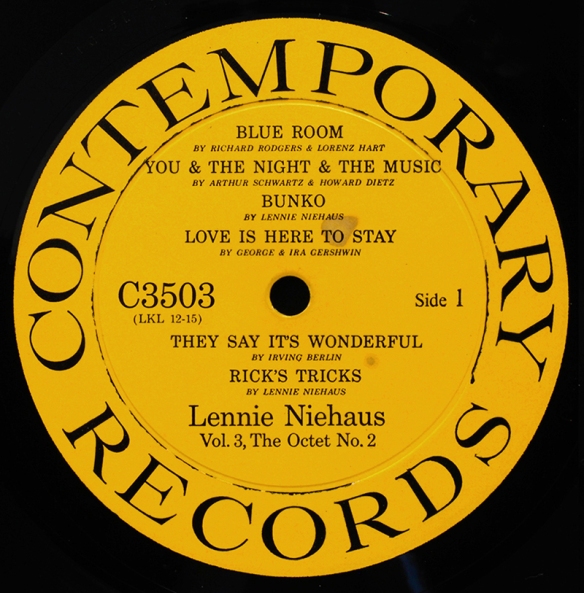 Back covers associated with these releases are simply Contemporary Records (no Inc.) address code 8481 Melrose Place, Los Angeles 46 (not the later zip code 90069 introduced in 1963)

First issues of the first 40 or so titles in C3500 series often had coloured frames around track-listing and coloured text titles on the liner notes. 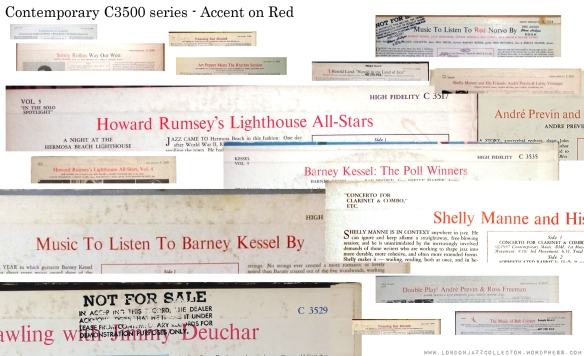 Controversially some records were issued in differently coloured titles at different times, in both red and blue print as well as later issues in Black. Some were first issued only in Black print, so absence of colour doesn’t disqualify it from being a first cover, it is title specific 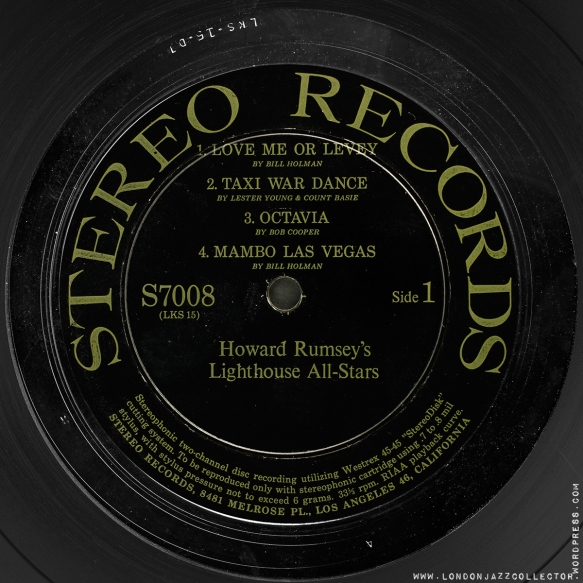 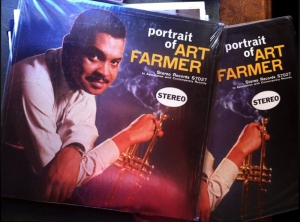 In 1958 Contemporary founded a new company  for publishing the “new” stereo technology records- whose  cover bears the distinctive addition of the word “STEREO” on a white oval, and its own label, Stereo Records.

Though the thirty-odd titles released on the S7000 Stereo Records series are all found with black/gold text, some issues are seen with green marbled glossy label, shown below. These seem to be only towards the end of  the series, before stereo publishing reverted to the Contemporary Records label in the S7500 series. The deep groove points to a pre-1960 origin. Stereo Record was officially dissolved in 1963  though it is likely Contemporary ceased to use that name beyond 1960, publishing stereo in its’ own name in the S7500 series. 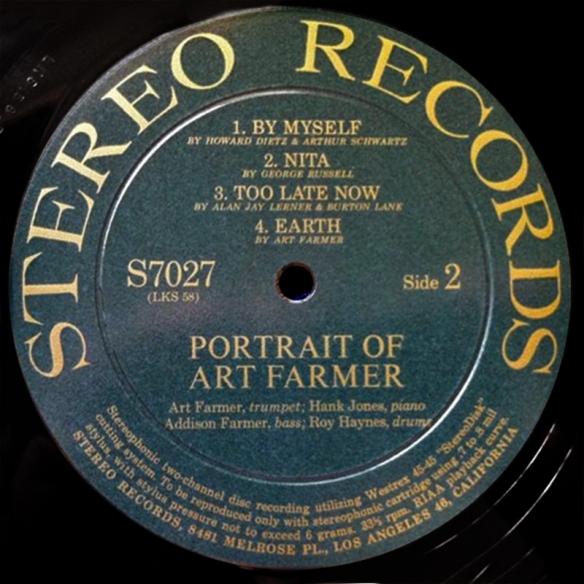 “In the early 1950’s they were using Capitol’s Melrose Studio to cut “Contemporary” records. When Capitol switched over to the Tower Studio in July of 1956, Contemporary didn’t follow over there. Instead they bought their own Ampex 350-2 portable tape recorder and started recording in the back storeroom of the Contemporary/Good Time Jazz offices. The two engineers, Howard Holzer and Roy DuNann, just set up their three or four microphones and let her rip, live to two track. They also had a mono machine going for the mono feed.

“At that time the idea of “binaural” sound meant (to them) a very obvious left/right deal, with nothing in the middle. They actually had not heard any stereo recordings before they started recording in the medium so they just guessed that it was the correct way to do it. The reason they did a binaural recording at all was because of the open reel audiophile tape market. This had nothing to do with stereo LP’s which didn’t come along until 1958. Of course when stereo records were finally perfected, Contemporary found that their backlog of stereo master tapes could be utilized.

“Therefore such ground-breaking works from 1956-7 such as “Art Pepper Meets The Rhythm Section”, Sonny Rollins “Way Out West”, Shelly Manne and Friends “Jazz Impressions Of MY FAIR LADY” and the great Brown/Kessel/Manne “The Poll Winners” exist in true binaural form and they sound great. I’ve listened to the mono master recordings of these albums and they sound a bit pinched compared to their binaural counterparts. The mono tapes had a bit of compression and EQ done to them during recording (like any major studio would) but the two-track tapes were done pretty much neutral and uncompressed…”

As Contemporary commenced publishing Stereo titles under its own name in the early ’60s it re-designated the original yellow C3500 series as the M3500 series ( M for monophonic) and commenced a new S7500 series (S for Stereophonic”) adopting the same black label gold text  design used by Stereo Records. The black/gold DG  are the 1st issue original release, however all three colours were used arbitrarily among later reissues, so other factors are necessary to corroborate early status.

(Later reissues have similar label design, black or sometimes green/gold, even yellow/ black,  without deep groove and thinner vinyl in the region of 120-130gm) 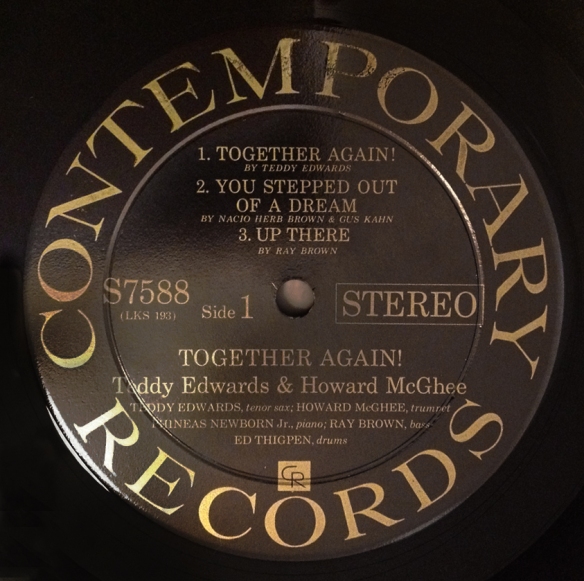 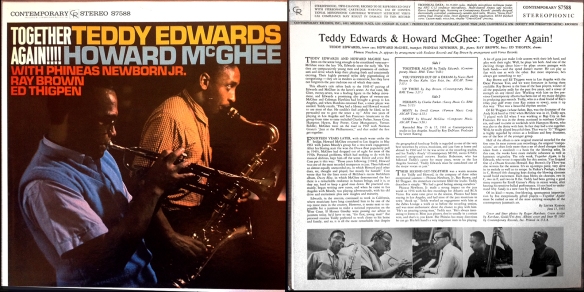 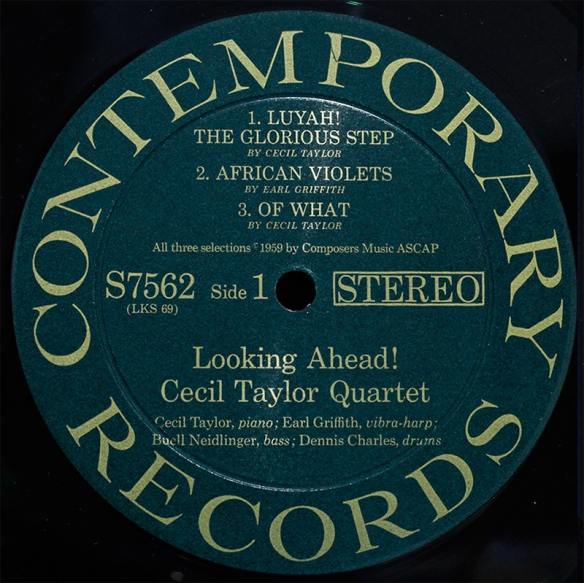 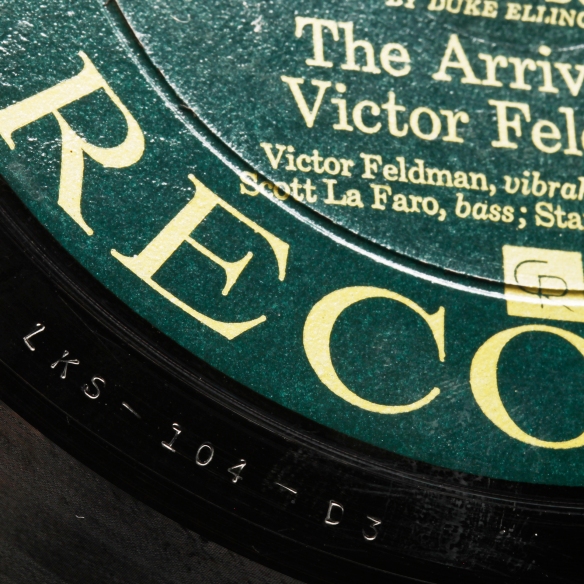 Note: with Contemporary Records, the catalogue number is never present on the matrix or on the runout – only the matrix code, typically LKS or LKL and two or three digits, and then what looks like a code for the mother and or the stamper. The original metal matrix has a sequential number each side eg LKS 69 on one side, LKS 70 on the other. The Catalogue number is found only on the label, and of course is the same each side.

Below the RCA Hollywood stamp, which endures even with early 70’s reissues. 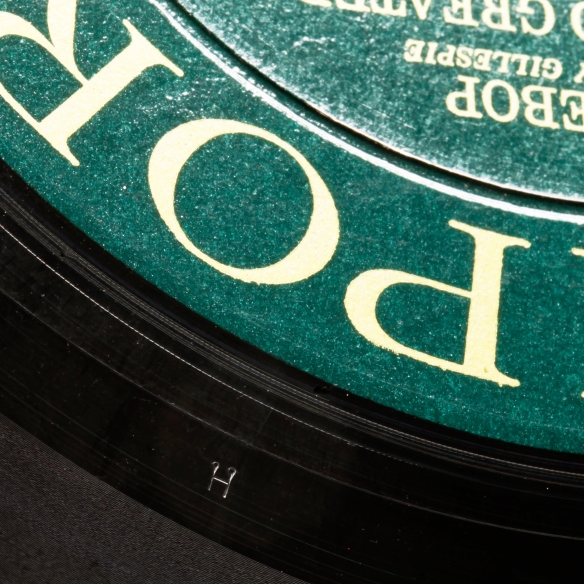 Around the time of the S7500 series catalogue number reached S7600,  though black/gold, this label is later, no longer has a box around the word “STEREO”  and the artist name/album title is  no longer in the classic serif font, but heavy more “funky” font, late ’60s possibly through to  early ’70s.

Though this is a 1st pressing of new title, not a reissue, there is no significance in the label being black/gold as titles were equally released at this time on yellow/black or green/gold. The label colour is arbitrary, merely one of three colours in use. The deep groove die impression is frequently replaced by the sixpenny circular pressing die around the spindle hole, or no groove at all. Pressing plant continues to be RCA Hollywood (H stamp in run-out) 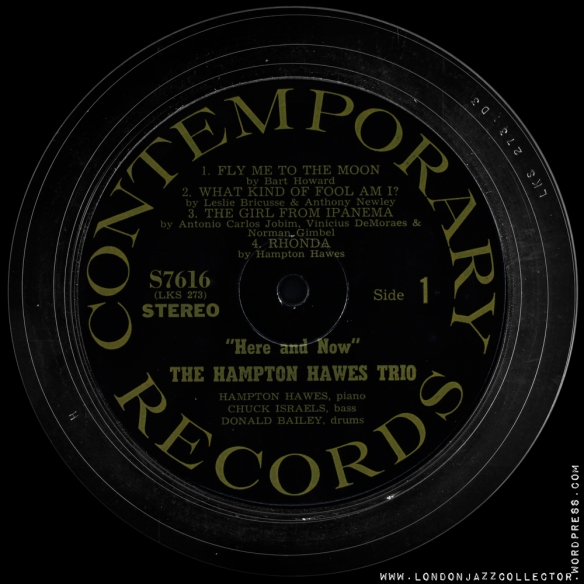 6. ’70s to early ’80s, last label in use before sale of Contemporary Records Inc.to Fantasy Records in 1984. “Funky fonts” start to appear. 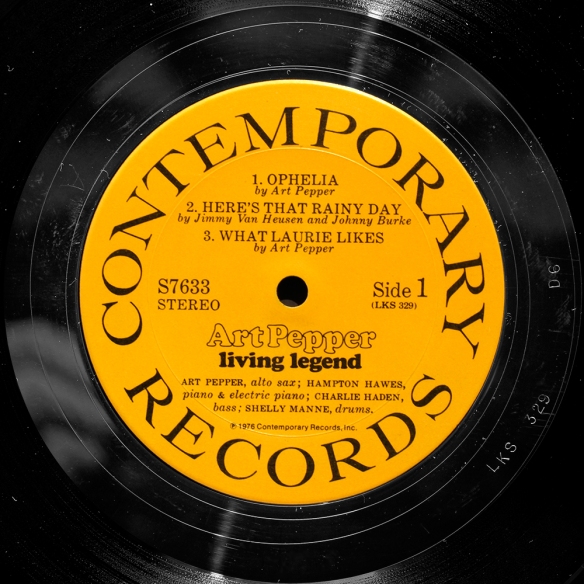 Not deep groove, just the faintest step where the deep groove used to be,  artist and record title in “funky” font, date of manufacture on label (1976). As an original Contemporary pressing it bears a machine-stamped original matrix code in the runout –  LKS 329 (“Lester Koenig Stereo”)  and the mother and stamper “D 6”. The only other engraving is a faint hand-written letter “A”. (to remind someone in the factory which was side A?)

With the closure of RCA’s Hollywood pressing plant in 1976, metalware and pressing of Contemporary Records moved to Monarch Record Mfg, Los Angeles. Monarch pressed singles by the million, and the Contemporary LP requirements were fairly insignificant by comparison.

Though in some cases Monarch pressed with stampers derived from original LKS masters, some of their output shows signs of remastering, adding their own factory control processes. In addition to LKS recording number and mother/stamper code, job codes are hand etched, with a delta symbol prefix and a long number. Hand-etched matrix codes replace those associated with  RCA Hollywood stamped matrix. The Monarch logo, a circle around letters M and R which share the same stem, appears in the run-out, often hardly visible. Vinyl can be wafer thin, as little as 105 grams.

With new releases during the Monarch era, it looks like the association with Du Nann and Holzer ended and mastering moved to Sheffield Lab Matrix (SLM) and Master Studios.

A new catalogue 14000 series managed a few dozen new titles for Contemporary under the aegis of Lester’s son John, showcasing a few leading lights of the ’60s taking time out from their fusion duties. 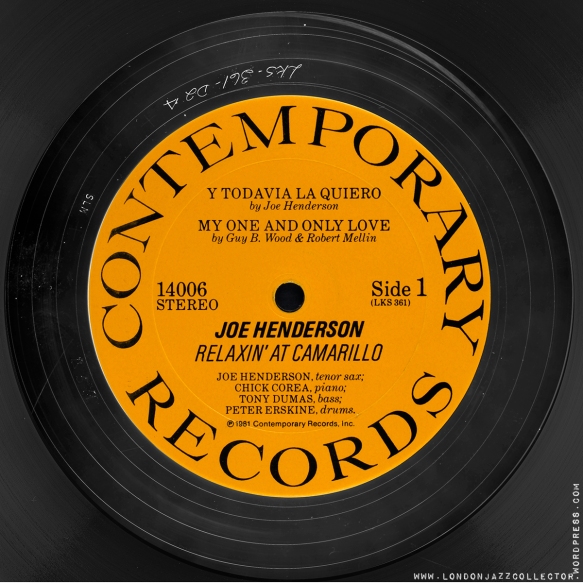 Nice recordings, and sonically quite acceptable, though some of the players (Richard Davis, Anthony Williams) were no longer in the same place, a decade of amplified stadium concerts taking its toll. Corea however is on good form, acoustic piano far removed from the interminable synth-noodling and squawking that followed.

Next jump to Contemporary Records  : Back covers, addresses,  coloured text and frames