7139 comes in both the mono red/brown cover with Prestige Stereo banner on top, and a blue cover exclusive to the stereo.

The jackets have the Prestige house style: black and white artist portrait with a single colour tint, but with a “peek-a-boo” overlapped PRESTIGE STEREO banner. The titles mostly set in a simple typeface – Bodoni  or similar serif font

The second of these stereo titles, PRST 7147, Paul Quinichette, Basie Reunion, was recorded at Van Gelder Studio, Hackensack, New Jersey, on September 5 or October 18, 1957 (date depending on source) an older recording than Garland’s Manteca recorded in April 1958. 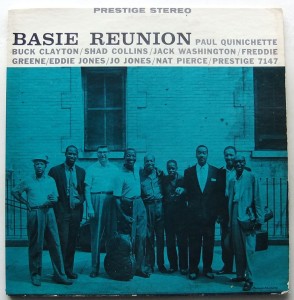 A few more titles joined the list in the course of the year, but stereo was still a fracton of sales, until sales of the stereo record player caught up. Most (all?) of these titles are Van Gelder recordings, whose recording method at this time adopted two-track tape, enabling a stereo master lacquer to be cut:

1959-1960 Prestige stereo release list  is  few select titles amidst a sea of mono issues.  Van Gelder selectively cut an additional stereo lacquer for a small number of titles. Sales of stereowere very small initially, judging from the few found among auction results among these titles, no more than 5%.

It was not until 1961 that Prestige began issuing all new titles in stereo, starting with PRST 7227 Sizzlin’ , Arnett Cobb,a grittybluesy saxophonist. Market pressure ensured all new releases would now have a stereo choice, as the stereo bandwagon gained momentum. As with Blue Note, it is likely that initially the stereo issue was some time later than the mono, and later they were both issued simultaneously. About 125 titles in total were issued in stereo on the black/silver fireworks label, before the transtion to the trident labels in late 1964. By around 1967, mono was discontinued (apart for some radio station promos) and records issued in only stereo.

“Through the marvel’s of electronics, this historic jazz recording has been remastered from the mono original into stereo.”

Most Prestige stereo issues are bona fide two-track recordings. Some of the oldest classic recordings are scrupulously reissued only in their original format. However in 1963-4, PRST 7245 – 7256, consists of a run of twelve reissues of Prestige’s “cream of the crop” historical recording sessions – Rollins, Monk,Davis, Coltrane, Getz, Mulligan, Konitz, JJ – made between 1949 and 1956, long before the watershed date of March 7, 1957, when Van Gelder began recording to two track tape. Eleven of the twelve had been issued previously in mono on the NY label, and a second mono issue on the yellow black Bergenfield label.

The continuous run of the catalogue numbers indicates a planned and carefully executed single programme, and the covers of each proudly proclaim “REMASTERED FOR STEREO” (apart from three)

PRST 7253 JJ Johnson’s Looking Back was given a stereo catalogue number and the label says stereo, but a mono fireworks label was borrowed, and bodged, without the yellow, resulting in the only silver and/black fireworks stereo hybrid.

Yusef Lateef Plays for Lovers 7447 had been remastered for stereo. The mono edition was put in Stereo jacket and stickered “mono”, reads “Remastered for MONO”.

The long six year run of the black/ silver fireworks Bergenfield NJ. label would make it difficult to distinguish an original from a repressing, but for the helpful manner through which Prestige gave reissues a new higher catalogue number,Van Gelder scratched out the original catalogue number code on the original metal, or derived metalware. I haven’t quite figured out how this worked.

Prestige used the stereo black/silver fireworks design with Bergenfield address from August 1958 through to September 1964. In late 1964, Prestige label owner Robert Weinstock decided it was time to give Prestige a more modern look, and a new logo: the trident.

The stereo label changed briefly to a black/silver trident label , PR 7310 up to around 7336), in parallel to a gold/black trident label for mono, and then both mono and stereo standardised on a blue/3 o’clock trident label. A series of further label changes followed before the sale to Fantasy in 1971, moving the trident from 3 o’clock to 12 o’clock, and placing a circle around it, and finally a colour change to a garish purple-pink.

Most labels are Discogs uploads, but supplemented by other sources. I found eventually a black/silver label for all but two titles in the Prestige catalogue. In several cases the only source was a specialist Japanese record selling site.The large gaps between selected stereo pressings in 1960 are indicated. Some may eventually turn up, and be added later. 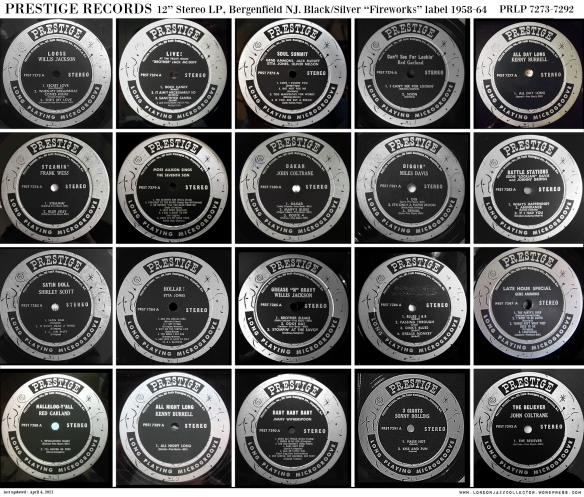 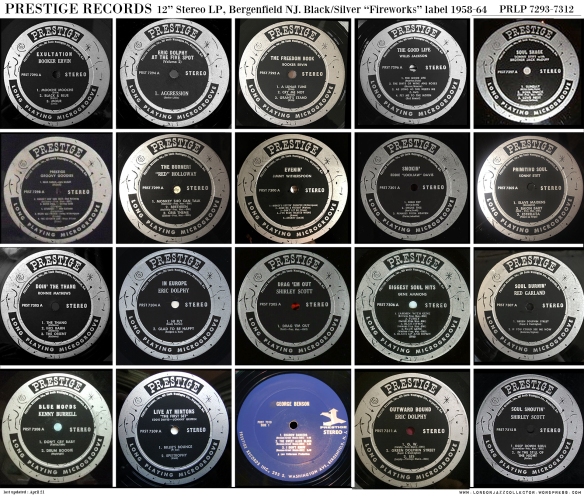 Thereafter at some point (not determined in this research) the short-lived black /silver trident stops and the blue/3 oclock trident continues, though it looks not a clean break, titles possibly issued out of catalogue number order, or exist on both labels..