Welcome to the Blue Note Zoo, and one of the more perplexing aspects of collecting Blue Note records, the phenomenom of labels and pressing rings on one side don’t match the other. Never assume that what is on side 1 is the same as side 2.

The ten examples below from my own collection  illustrate the chaotic world of later re-pressings of early Blue Note titles, where earlier labels  have been used on later pressings. One example in my collection is a record  with Lexington labels both sides (label in use 1956-7) which has no “ear”, hence pressed by Liberty after 1966.

These are the bargains of the collectors bin if you know what’s what, or a big fall in value if you don’t.

The first pressing run of early Blue Note titles title was perhaps only one or two thousand copies.  If a title sold well, over time, further copies would be pressed according to demand, in small additional runs.

With print, most of the cost incurred is in the initial type-setting and artwork.  It must have made economic sense  to print more labels than initially required, and to keep surplus in stock for use in subsequent pressings

The Blue Note label detail changed every few years, with each change of the company address, – initially 767 Lexington Av., then 47 West 63rd St, then finally simply New York, USA. Old labels were used on new pressings. therefore the Blue Note label on any particular record  is merely a reflection of label  stock position  for that title at the time. It is not necessarily the approximate year of pressing, which may have been anything up to a decade later. Even where you have a record with “original labels”, it is often found that the accompanying inner sleeve “demonstrates” it was  manufactured many years after the first release.

It seems one imperative in manufacture of records at small companies was to save cost (where the majors couldn’t care less).  When pressing more copies of any title, they would  use up any old stock of labels before printing new ones. When stock of a title ran out, a new print run of labels would be ordered, of course bearing the latest company address.

It is axiomatic that the presence of a more modern label invalidates the older label for the purpose of establishing the likely year of pressing, though I have seen examples where both  labels were “old”, for example, a Lexington (1956) and a W63rd with ® (1961) on a Liberty pressing with no ear (1966) .

The greatest uncertainty rests with ’50s titles where “original first release” and continued pressing took place before the introduction of the registered trademark. In such cases it is useful to examine the  weight of the vinyl. Vinyl weight and thickness dropped significantly over the years, and can help pinpoint the probable time of manufacture, whatever the label suggests.

In the mid ’50s records pressed  on the East Coast  weighed typically 190-220gm. (For some reason, West coast pressings were often significantly lighter)  By the early Sixties this had fallen to 160-180 gm and by the time Liberty came on the scene in 1966, 150-160gm was the norm. Eventually, in the closing decade of vinyl production, labels like Fantasy were pressing at below 100 grams.

The label may say one thing but the weight says not. However, there is a degree of natural variation in vinyl biscuit weight, and records can fall outside the norm for their time e.g. a 140gm Lexington. I emphasise: these are exceptions. Most records conformed to the pressing practice of their day.

Blue Note pressings are found with several different pressing ring combinations, which affects their status as “original” pressing, or not.

Up until 1961, all Blue Note pressings have a deep groove pressing ring on both sides. This includes all the 1500 12″ series and 4000 series up to either 4058 or 4059. (Some collectors have argued  BLP 4059 was the last “genuine” deep groove original pressing, though copies exist without deep groove which have promo status.) Any copy of these early titles without a deep groove both sides is certainly  a later pressing manufactured after 1961.

New dies that  left a single step pressing ring, not a deep groove, came into use at the Plastylite plant around 1960-1 . Thereafter, pressings of new titles and re-pressings of earlier titles appear with a deep groove on just one or other side, or none at all, or by chance, both.

It was argued by some collectors the non-DG new dies were reserved for first pressings and the older DG dies sometimes used in repressing orders, though as some commentators have  noted (me included) , manufacturing often  involves an element of using “whatever is to hand”.

In all  of these examples, note the label mongrels are a MONO edition, as stereo was a later development. On some titles, a Stereo Van Gelder master might be produced at a later date. My mixed label collection are all later pressings from the original mono Van Gelder master.

In almost all cases the metalwork shows a direct lineage to Van Gelder original masters, and the sound quality is superb. The vinyl, being more recent,  will often be in better condition than earlier pressings.

It is not uncommon for ebay sellers to describe the label on one side and assume the other side is the same. Mistakes happen.

It also happens that sellers will describe a Liberty pressing (no “ear”) as having “original Blue Note labels”, which is strictly correct. The labels are “originals” just not the record, whose pressing occurred after the sale of Blue Note to Liberty.

On the positive side, the mixed label is a sign of the copy being among the earliest part of a second or third pressing run, and there are some titles which have mixed labels in their very first pressing.

A record first released in 1956 (Lexington label) which enjoyed several later pressing runs, at least one evidenced here on later W63rd labels  (W63rd label with INC. and ® = 1961-2) and another in the New York label period (1962-6). It is “an original Blue Note”, just not the original first pressing Blue Note.

Here is a mismatch! –  1956/7 label (Lexington) and a NY label (1962-6). The bad news: it’s not a Lexington; the good news, it’s probably an early NY, at the 1962-end rather than the 1966-end, as they were still cannibalising stocks of the older label. The relatively heavy vinyl tends to confirm early NY provenance. To clinch it, all it needs is an undated (early) corporate inner sleeve. (The inner sleeve is often the best indicator of when pressed, between 1962 and 1966))

Ear confirms pre 1966 Blue Note not Liberty, NY label confirms 1962 onwards, both having ® means after 1961, 180gm vinyl confirms older manufacture, neither side DG suggests after 1961. Despite being manufactured in the emerging Stereo era, thankfully mono, as stereo 1521 would not be a pleasant experience. First true stereo release was BLP 1554.

This is a really interesting example. Neither label has the R or the Inc, and  both sides are DG, but the W63rd label betrays a second pressing, some time between 1957 and 1961. Original would be Lexington both sides. A very early second pressing.

Interesting signpost here is the early “faint” inked font on Side 1, compared with the more heavily-inked blocky font of Side 2. Faint font indicates earlier. 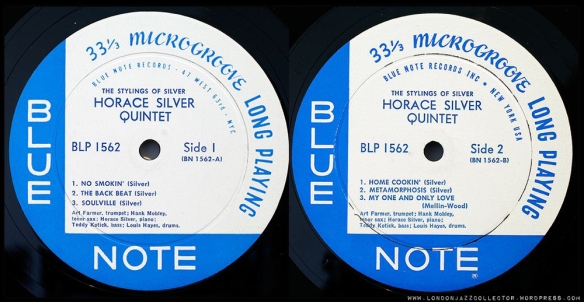 This stuff would drive you crazy, but its all terrific sounding records, and great value for the “mongrels”. If a pressing’s original status is hotly disputed, take Fred Cohen’s word for it, or my own preference, that of Rhett Butler: “Frankly, my dear, I don’t give a damn”