Like most of Dexter’s records, it is straight surefooted tenor-led jazz.

Vintage French release mid’50s. Paris-based Ducretet Thompson company made radios for the military, though with the French you can never be sure for which side.  At some point they became a subsidiary of London Records (London American Jazz Recordings), which would explain the release of this very early Dexter album for European audiences.

The very wide run-out groove both sides is a reminder you will not be getting a lot of playing time.

Dexter Blows Hot and Cool gets my vote for one of the most iconic covers in the history of jazz, the history of jazz photography, and probably in the history of smoking. I quit over thirty years ago, but this cover makes it very attractive, it’s so atmospheric. And significantly, carries no health warning whatsoever. Entirely superfluous, given what many of these guys were sticking in their arm. 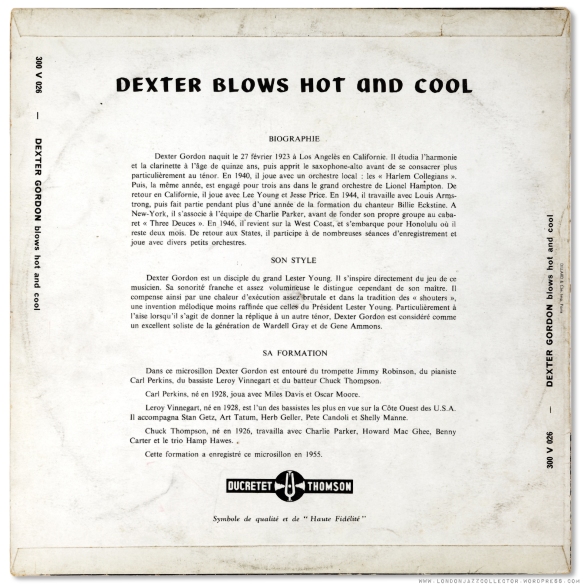 Issued originally on red vinyl on the Dootone label, originals sell for a lot of zeros so I was delighted to pick up this copy on the French 1950’s Ducretet Thompson label  for less than £20, in an out-of-town vinyl store, where real jazz goes unrecognised by local rock and pop collectors. The sheer weight of it had me reach for my credit card, a characteristic 220 gm original period pressing.