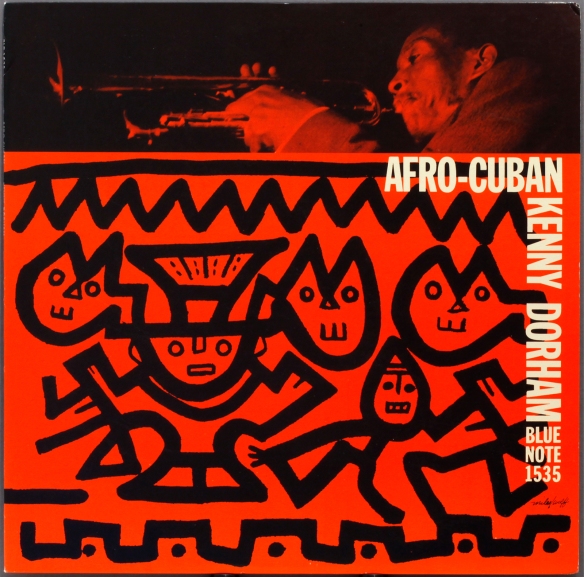 and subsequently re-released on 12″ LP in 1957 with additional tracks and new artwork, on Lexington . This is a copy of the latter version, as reissued in Japan. The line up is magnificent, with one of my favourite bassists Oscar Pettiford, plus JJ Johnson, Hank Mobley, Cecil Payne and Horace Silver, though if I were Charlie Valdez I wouldn’t be too delighted with the nickname “potato”. Skin or shape, it doesn’t flatter.  Blakey powers along as you might expect, no surprises there. Dorham is in his best peppy form ,with his trademark rapid bursts of notes in twisting trails . Mobley excels in his generous solo space and Cecil Payne’s baritone adds some welcome texture, whilst adding a little JJ can never be wrong.

As the title implies it’s a riproaring latin-infused bop session –  time to brush up your steps to the Mambo, or may be just light up that Cuban cigar. “Hey Muchachos, Vaya con Dios!” I think I remember that from a Spaghetti western, it sounded sort of Latino.

Japanese pressing by Toshiba-EMI dating from November 1983, nearly thirty years old itself, though reissued twenty years after the original Blue Note release  on Lexington labels. It may be considered one of Dorham’s best recordings as regards musical content, but as an audio recording it leaves something to be desired. 1955 was a little early in the way of recording technology, especially microphones, and it does sometimes sound a little boxed in, and occasionally the mikes overload. 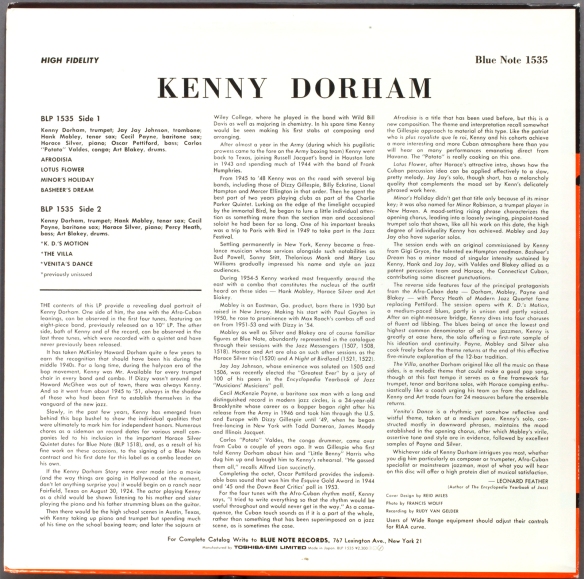 “Tell me Miss Playmate, what was it first attracted you to a 79-year-old billionaire”?  Yes, it was money that caused me to fish out my copy of Kenny Dorham’s Afro-Cuban. $1,293.66 to be precise, in its closing eBay auction. From time to time I like to watch the closing minutes of auctions for highly collectible records. Anyone can do it, just click on “ending soonest” over at Collectors Weekly and watch

I was taken a back by the closing price, and curious about who would pay $1300 dollars for this very early Blue Note. First, the screen at 0 seconds to close: 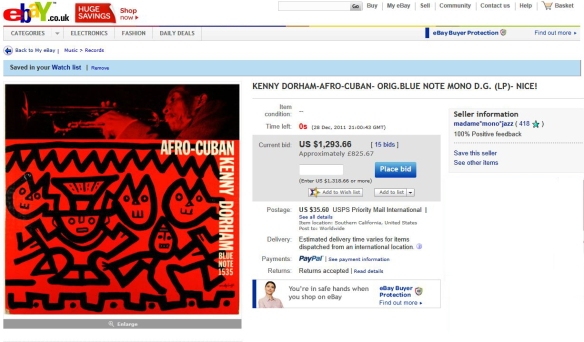 Next up, the thirty-day trading summary of the “lucky” winner. Phew! Score over 1,000, makes thirty eBay bids a day, all on records, and he likes to chase the action, putting in up to six bids on the same item. He doesn’t like losing. If they were all big-ticket items like this one, he would be spending up to $100k a month on records. I can remember putting in three bids overnight and woke up terrified I had won them all.

That evening I  sat back and played my Japanese copy of Afro-Cuban. It’s very good. The Toshiba sounds great, but I can imagine it firing up as a 1st pressing on Lexington, fizzling with excitement. Dorham’s bright trail of notes, Mobley in your living room, tenor and baritone duelling, that would be very very exciting. I couldn’t have paid $1,300 for it, but the auction prompted me to hear the record afresh.

I hadn’t played this for a long time. It was one of my first jazz purchases three years ago, which cost me all of £18.  Hearing it now, I can now appreciate it in a way I couldn’t have as a jazz-rookie. So a good outcome. I hope the buyer gets as much pleasure from listening to it as I have, hopefully $1,250 more. Now, where’s that cigar?