Happy New Year to all LJC visitors. Congratulations on finding your way here. Special greetings to all my commentors –  without your contributions, there would be a fair bit less here to read. Hi also to all the lurkers: I know you are out there.  Lots more jazz on vinyl coming up in the year ahead. I hope you are all looking forward to it as much as I am. I for one can’t wait to hear what I am going to say.

The bass player is of course not “Dave Chambers” as named on the jacket and liner sidebar. “Dave” is “Paul”,  John, Paul, George and Bingo.

Jan recommended Byrd’s Word, and least I could do is spread his Word. My copy is one of those, comment ça se dit… “Made in France” records on the Savoy Musidisc label.

AllMusic review notes: “Before making his mark with several fine Blue Note albums… Donald Byrd got his start with several blowing dates for Savoy, Prestige, and a few other independents. This 1955 date for Savoy pitted Byrd with Basie alum and tenor saxophonist Frank Foster, pianist Hank Jones, bassist Paul Chambers, and drummer Kenny Clarke…While not on par with Byrd’s much more polished efforts for Blue Note, Byrd’s Word is fine for fans in the mood for some loose ’50s hard bop” And we’re in the mood for some Fifties hard bop, aren’t we jazzers?

The European cover a study in blue, no relation to the US original cover, which is rather fine too. (That would be “Dave” Chambers pictured there on bass) 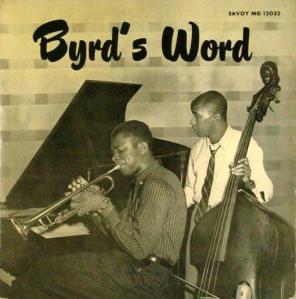 Purchased in France in a second-hand record shop, for fifteen euro as I recall. Had to wade through a mountain of French recording artists naturally, Sidney Bechet, Django, Stephane Grapelli, then mountains of Forties swing bands, then mountains of Serge Gainsbourg and girlie chanteuses, Eighties fusion and funk, Spyrogyra, David Sandborn, Yellowjackets..Just when all hope had gone, this little gem popped unexpectedly into my hands. Not the best shape but this was France: somewhere between  VG minus  and VG is the local equivalent, pas mal.

In the interest of completeness on Byrd’s Word, here are the  Ebay Vinyl House UK Savoy pictures with the what I would call “oxblood” labels, and jacket, (with the sellers rather annoying vertical diagonal and horizontal perspective tilt taken out.

Here is the other Savoy in bright red label livery, no frame around cover (thanks to Dottorjazz for sourcing pictures) 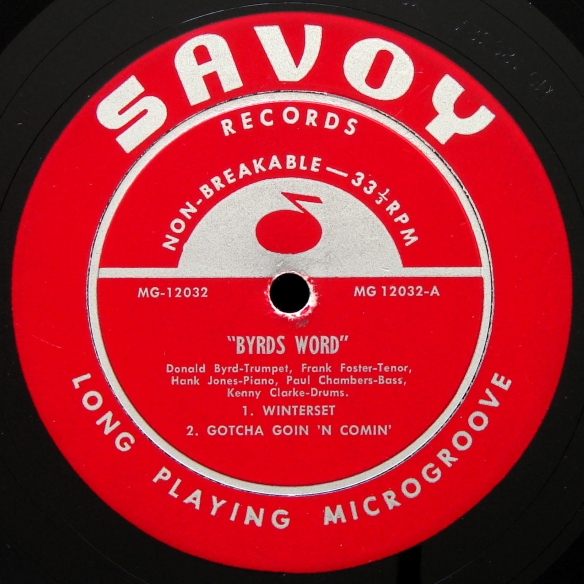 Nice picture, that’s the way to do it. The bright red is deep groove, the oxblood red is not. That must count for something.
(Last updated: November 6, 2016: photos)