His records are much sought after – some of the rarest and most expensive jazz on vinyl. His debut  album Tilt, fetches up to $3,000 if it ever appears, and lesser title up to $1,000 is not unusual.

Outside Europe his name is usually met with a blank stare: who?,  followed by look of incomprehension –  that a relatively unknown geeky-looking French kid can play tenor saxophone with the big league.

French tenor saxophonist Barney Wilen was not quite 21 years old when this session with three veterans of the Modern Jazz Quartet was recorded. Surprisingly mature and self-assured, he interprets several Django Reinhardt compositions, along with a few by his French contemporaries and a pair of his own works.His flowing melodic lines, fresh lyrical tone, and his ability to swing is always a delight.  Miles Davis  recruited Wilen for his European tour dates at this time, a measure of Davis’s estimation of the young Barney. You think Miles lacks taste in tenors? Coltrane? 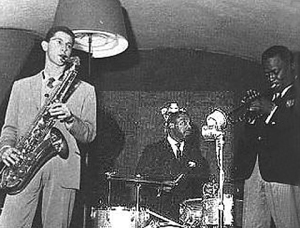 Wilen with Miles and Kenny Clark at Club St Germain, 1957

Milt Jackson plays exclusively on piano, avoiding the usual overly-familiar sound of MJQ, which is probably a good thing here. Senegalese percussionist Gana M’Bow, who appears on Art Blakey’s 1958 Club St Germain sessions, is added to a couple of tracks including selection Swing 39. It is not so much “French Jazz”, so much as “Americans in Paris”. Also generally a good thing, including when in tanks.

Interesting groove-guard type pressing with raised lip around the circumference of the label, I assume intended to protect the vinyl when dropped by an autochanger. First I have seen like this.The central die pressing mark is also raised, so much that the turntable puck lacked sufficient purchase to fasten the record, what with its 183 gram weight.

Pre-owned record shop in fashionable central west London, usually busy with DJ types digging in its specialty Soul and Dance sections. I am surprised they let someone like me in. I mean, who is going to think it is cool browsing in a place their Dad might shop?

The problem with buying online is you are entirely reliant on the sellers description and grading, especially those very elastic descriptions like “in very good condition”, and  “a few marks, which do not affect play”, sometimes meaning audible scratches that sound but don’t actually cause a stick or jump. In a shop you can see the vinyl for yourself, make up your own mind if it is within your personal tolerance threshold, something that is worth paying (a little) extra for. The best test of course is a quick audition, however London record shops divide basically into two types – those with a vinyl listening facility, and those without. This was a “without”, so you have to trust your judgement.

The problem with buying from shops, however, is that it is not often you find anything on the shelves that gets you excited. This was a nice exception.

Always remember LJC’s First Law of Vintage Vinyl Collecting: See it, buy it; because you never know if you will ever see it again.