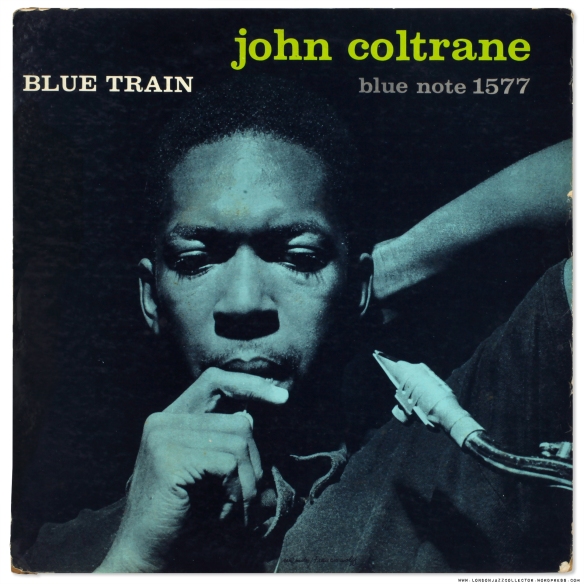 Apologies, my copy is a little bit noisy from time to time.

This is a title every self-respecting jazz collector must own, or not rest until they do. Mine is a trifle humble, and I would love a better copy, but I settled for this for the time being. You can do better, and many of you probably have. It was Coltrane’s favourite recording of his own work, commenting from the vantage point of 1960. Are you going to argue with Coltrane? He was still firmly planted in hard bop but had already developed  an eclectic vocabulary of blues riffs, bebop lines, his sheets of sound, and changes crackling with volatile energy. Along with Giant Steps, Blue Train is a landmark.

I have since acquired a copy on 47W63rd labels, though with INC and ®, which I have added to the post for completeness, below. The incorporation of Blue Note occurred  towards the end of 1959, appearing first on thelabels of records released in October 1959, so this earlier copy could be from anywhere between late 1959 and mid-1962 when the NY label was introduced. However the picture inner sleeve accompanying the record, in poor condition,  is a design in use between December 1961 and April 1962, which is as good a date stamp as you will find.

The covers are both laminated, with light sheen dimpled finish. The older cover is slightly heavier and the colour blue/cyan more saturated. The newer cover is sightly lighter, and the blue/cyan  pronouncedly less saturated (both shot simultaneously  in the same light, and white balance neutralised, so the colour differences are “real”). Both covers could be manufactured at different times, taken from stock.

A comparison I would not usually make, so it is very educational! 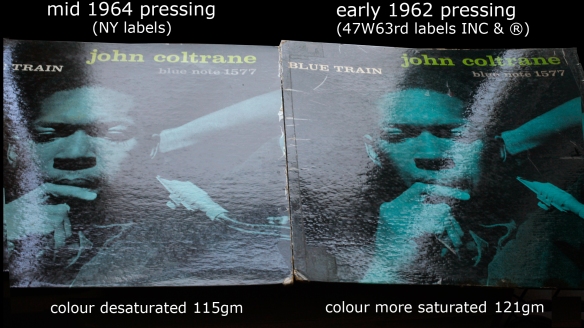 What is also interesting is that while the matrix and RVG stamps are identical between copies, the Plastylite ear is in a different position on each, confirming that the “P” does not appear on any of the metal parts, but applied somehow during pressing. 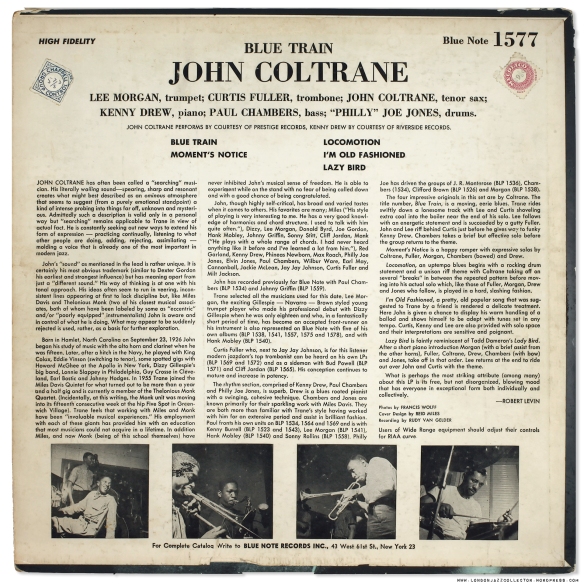 Blue Train has been reissued many times, probably more than any other title. Every owner of the Blue Note catalogue contributed a reissue. Sales in all formats is said to run into millions, which is altogether remarkable for a jazz recording, and must mean a lot of people own one or more editions. Discogs boasts 64 separate entries, though some of those are simply duplicates of other entries or missing essential information. It’s been a particular target of premium audiophile reissues boasting 180 gram or 200 gram vinyl.

A word about Blue Train from audiophile reissue guru Steve Hoffman, in his own forum:

You sad “collectors”. Blue Note first issues sound pretty grim eh, Steve? This from the man whose engineering skills make those  “audiophile”  vinyl reissues which sound so lacklustre when A:B tested against originals under real-world hi-end home hifi conditions. Sorry Steve, I am going to have to disagree with you on this one.

Blue Note originals sound pretty fantastic to me, a judgement based on listening on high-end hi-fi to many hundreds of titles, just about every pressing variation from 1956 original Lexington through to 2010 audiophile editions, and everything in between, including US, UK, French, German and Japanese editions. With a few exceptions, originals rock. It’s just unfortunate they are so rare and expensive, but that is not to belittle their audio quality.

A word to you “collectors”. I know some of you have spent a lifetime tracking down a perfect original copy of this Holy Grail record.  I reckon you may have accumulated some others along the way. Maybe you have a play-copy for day-to-day, a sealed mint original in your archive, next to the submarine docking bay of your secret island? May be you have both mono and stereo copies. Perhaps you sold the all your originals for an audiophile edition, or own up, it’s just the Evil Silver Disk or even iTunes. You are among friends here, you can tell us, we won’t be judgemental (snigger).  Or maybe you just came here in search of a free download, and are disappointed. Time to fess-up.  Show up LJC, brag and show me yours. Which edition/s of Blue Train  do you own?

Poll: Which of these editions of Blue Train do you currently own?

Multiple answers permitted where you currently own more than one edition, including any format including vinyl, CD or download. Edition assigned according to label on vinyl, regardless of jacket; audiophile reissues by issuer. Do not include editions you no longer own. Either mono or stereo count towards the label. Complete all your answers during the one session before pressing “vote”

OK it’s not a perfect poll, but where else? Only at LJC. Come back often and see how the poll develops.

54 thoughts on “All aboard the Blue Train!”