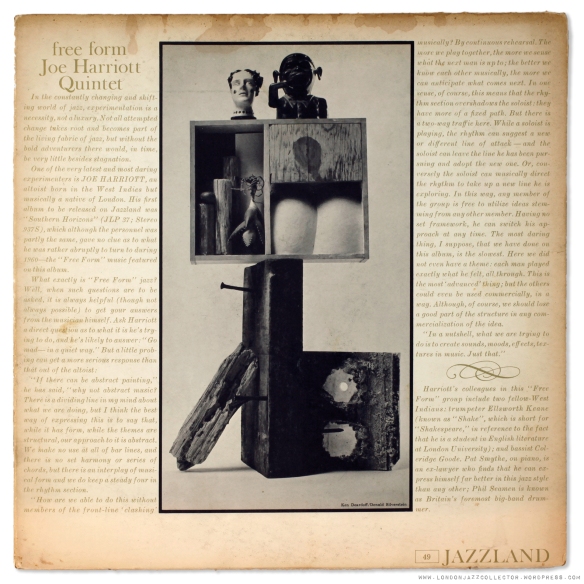 Jamaica-born Joe Harriott was one of several Caribbean jazz musicians, including Dizzy Reece, Harold McNair, Harry Beckett and Wilton Gaynair, who arrived in Britain in the 1950s. Along with Tubby Hayes, Harriott was also one of the few British jazz players to  receive international recognition, with two albums released in the US, including this album Free Form, released in 1960 on the Jazzland label.

At the outset a bebopper of the school of Charlie Parker, altoist Harriott went on to experiment with “free jazz”, and later in the Sixties with Indo-jazz fusion, a genre popular at the time – John McGlaughlin’s Shakti and others – in an effort to partner Indian classical music with the jazz aesthetic.

Harriot is also known for the notoriously expensive 1969 album Hum Dono, a collaboration with Goan indo-bebop guitarist Amancio d’Silva.   Up to $2,500 for an obscure British Sixties jazz record? Crazy, but that’s the “rare” premium, for one of the holy grail British jazz records: 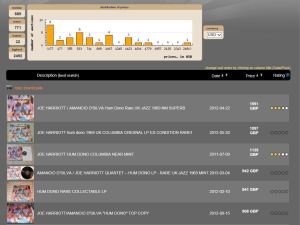 Worth £1500? Every penny, says MC Jazz, hip-bop master of turntabalism, who claims he owns all copies in the country. You can judge for yourself, as the EMI Memorial 1973 album helpfully includes a track from Hum Dono, Stephano’s Dance, featuring Norma Winstone on vocals (the only vocal track on LJC) and Ian Carr on flugelhorn.

It’s time for some rare grooves on LJC.

Of a different stripe is this track, taken from another of Harriott’s early albums pre his Bollywood phase, Abstract (1962), entitled Modal.

MC Jazz says: Anything called Modal is massive with us in the Hoxton and Spitalfields East London DJ Jazz Collective (Your turn to do the washing up, Gilles). Yeah, modal, rare grooves, avant-funkalicious, modal, great! seamless link, take it away… 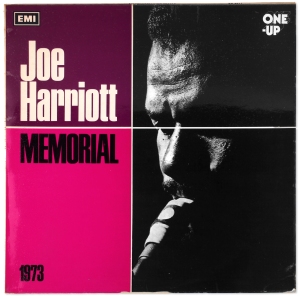 The Riverside Jazzland vinyl is VG minus – too many scratches to be a collectible copy – and the absence of deep groove casts a shadow over its provenance anyway,  but fortuitously an EMI memorial album for Joe Harriott came to the rescue. Not quite as shrill as the Jazzland transfer, it’s a decent stereo, mastered and pressed by EMI. So that’s the rip included  with the post. However to give it authentic period flavour, EMI’s stereo has channels summed to mono, as the original Free Form.

The EMI One Up label is  off my radar, recorded under the personal supervision of Denis Preston, one of the few independent producers on the British jazz scene of the 50’s and 60’s and the mastermind behind the independently produced EMI Lansdowne Jazz Series which includes Stan Tracy’s Jazz Suite -Under Milk Wood.

Jazzland recordings/pressings are not generally the finest, with a tendency towards excessive  brightness, and their choice of pressing plant open to question, but as with all these things, that’s the only way it is, if you want it. 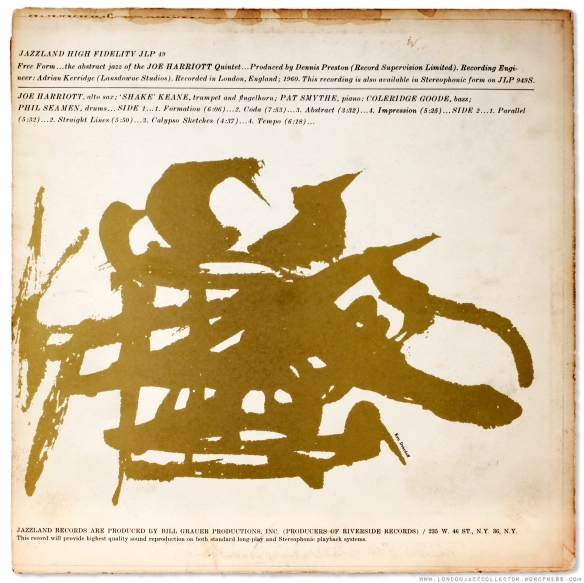 For a little more about Harriott, the Memorial 1973  liner notes are a fitting tribute, including words from Denis Preston (photo updated to one more readable) 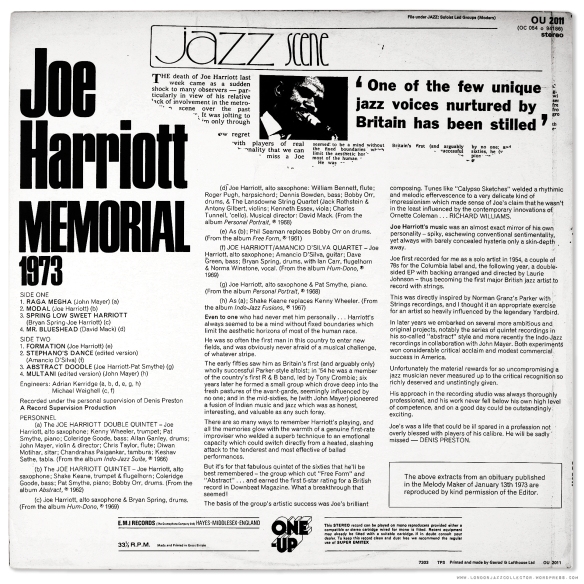 Joe Harriott moved from Kingston Jamaica to London England, and makes this  record which is released in the US. Sitting in London I buy it on Ebay from a Middle-Eastern seller located in the Emirate of  Dubai , but the record when it finally arrives is postmarked Holland. Someone says it’s a small world? Looks pretty big from where I sit.

Sadly it didn’t live up to the VG++ description, with quite a few deep sounding scratches which went over even my new tolerance threshold.  I offered to post it back, but the seller figured it wasn’t worth trying to sell it again, so a deal was done: offered a full refund, I could keep the record, but write off the postage. All the fun of the fair on the good ship Ebay. The EMI Joe Harriott Memorial 1973 also courtesy of Ebay. Normally I wouldn’t stoop to a “Best of …” collection but this one seemed a bit special, reissue in Stereo, pressed by EMI, a fitting reprise, RIP Joe Harriott.