I guess there are may be three records every jazz collector must own as good a copy as they can  find and afford: Coltrane’s Blue Train, Miles Davis Kind of Blue, and Sonny Rollins Saxophone Colossus. No doubt you can name a few more, but to my reckoning they are the must-haves. The UK CBS release of KOB is a non-starter compared with the Columbia six-eye. With Blue Train  you have no option but Blue Note. The Rollins, however, does offer an alternative candidate: UK Esquire.

European or US pressing?

Let me draw on my namesake and original inspiration, Jazz Collector:, who wrote just over a year ago about the “European edition” of Saxophone Colossus.

“Let’s catch up on some more jazz vinyl we’ve been watching on eBay, starting with: Saxophone Colossus, Sonny Rollins, Esquire 32-045. This was an original UK pressing listed in M- condition for the record and between VG++ and M- for the cover.

It sold for $358. It seems that the prices for these original European pressings have been getting higher and higher in recent years. I imagine, for many collectors, these would represent second copies, along with the original U.S. versions? Or perhaps for newer collectors, this record at $358 is a lot more affordable than a U.S. original at $2,000?

From a listening perspective, I don’t think there is a major difference between the U.S. and U.K. pressings and, as we’ve seen, some of our readers prefer the sound of the European pressings”

As noted in some of our recent posts, some of us prefer to avoid the risk of Prestige flirtation with recycled vinyl too. My later Prestige gold label hisses throughout, though this second pressing has no problems in that department. Jazz Collector diplomatically skirts around the “which is better?” question, and throws in a “some people say” line which acknowledges the debate without taking sides, always a safe option.

Soundcheck: previously posted US second issue on original Prestige, same track, though there may be differences due to the difference in turntable in use at the time of the earlier rip. I’ll replace with like for like in the next few weeks, but for now, take it as it comes. 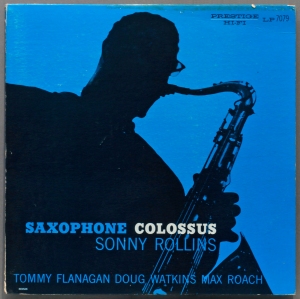 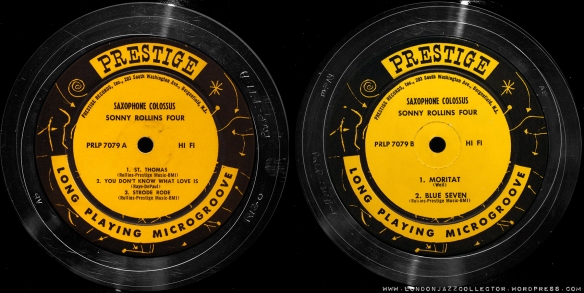 The etchings on the Esquire are fiendishly difficult to pull out.  They are all there – RVG by hand, Abbey Manufacturing AB, original Prestige matrix PRLP 7079 A and B, but only the stamped elements  – arrow shape on side one around six o’clock, and the stamper or mother number “1” at 3 o’clock –  catch the light. Anyone knows what the arrow stamp signifies, share your knowledge.  The hand etchings are shallow and  they stubbornly refuse to shine. None of this affects the groove pressing, which is bold and bright as you would expect from this superior recording. 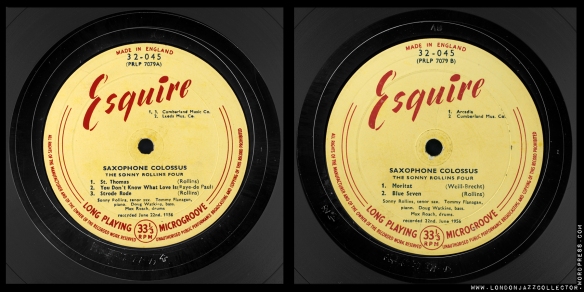 Five years. That’s about the time I have waited patiently bidding on copies of the Esquire edition of Rollins Saxophone Colossus, losing every time. On this occasion it went my way, and thankfully by a comfortable margin less than my actual bid. Sometimes virtue is rewarded.

Let’s put Jazz Collector to the test.Sneaky.We haven’t had a poll for a while, so I’d be interested in the wisdom of crowds on the sound difference between the US 2nd press and European 2nd press. I know the US cover is heaps better but put that to one side. Also any issues as to country of origin. Remember the Esquire is pressed with the same Abbey Manufacturing metalware as the Original first Prestige pressing.  Soundcheck the Esquire and the Prestige (headphones often the best listening medium) Any preference on your part, or nothing to choose between the two? Poll stays open for one week only. Have your say. (Could be worse, I could have mounted it as a blind trial. Next time I probably will)

Now, an open question, prompted by a conversation with my plumber, Jason. I had stuff belting out the hi-fi downstairs while he was working on the bathroom plumbing upstairs.  After each album he would politely ask: Who was that? I like that. Seems he knew his way around the genre a little, but says he was disappointed with his own efforts to choose the right records, not knowing what artists to look for, finding it all a bit too much.

I named three jazz albums that I think every modern jazz collector should own. As it happens he knew my three recommendations well, he’s not a complete beginner. The question is, aside from KOB, Blue Train and Saxophone Colossus, what else? I’ll offer you the chance to recommend five records to my plumber, who is a relative newcomer to jazz, who would like some pointers. The best record from five  artists who represent a significant and distinctive body of work,  rather than more of the same.

(In the event of wanting to put questions to my plumber, he’s not answering his phone right now, sorry)

And remember, as in life, there are no right answers, but there are plenty of wrong ones.

The floor is yours.