Straight ahead cutting-edge hard bop with modal colourings, and a double helping of  Blue Note’s  “best sidemen in town”, including Larry Young unusually on piano, Hancock, Carter, Henderson, Paul Chambers, astonishing line up delivering solid performances in a beautiful recording. There is not a bad track on it, and the different sides having more of your favourite players is a real bonus. Contrast the piano styles of Larry Young with Hancock? Ron Carter with Paul Chambers. A double pleasure.

Woody Shaw has been on the turntable quite a lot here are LJC Towers. To better understand his technical and musical innovation on trumpet, it’s worth quoting some proper musical observations, written by someone who knows what he’s talking about, rather than me. From Shaw’s Wiki:

Shaw was noted for his mastery and innovative use of “wide” intervals, often fourths and fifths, which are considered relatively unnatural to the trumpet and difficult to employ skillfully due to (a) the technical facility required to do so, (b) the architecture of the instrument, (c) the trumpet’s inherent harmonic tendencies based on the overtone series, and (d) its traditional association with intervals based more commonly on thirds and diatonic relationships.

In both his improvisations and his compositions, Shaw frequently used polytonality, the combination of two or more tonalities or keys (i.e. multiple chords or harmonic structures) at once. In his solos, he often superimposed highly complex permutations of the pentatonic scale and sequences of intervals that modulated unpredictably through numerous key centers.

He was a master of modality and used a wide range of harmonic color, generating unusual contrasts, using tension and resolution, dissonance, odd rhythmic groupings, and “over the barline” phrases, yet always resolving his ideas according to the form and harmonic structure of a given composition while adhering to the conventions of jazz improvisation and simultaneously creating new ones.

His “attack” was remarkably clean and precise, regardless of tempo (Shaw often played extremely fast passages). He had a rich, dark tone that was distinctive with a near-vocal quality to it; his intonation and articulation were highly developed, and he greatly utilized the effects of the lower register, usually employing a deep, extended vibrato at the end of his phrases. Shaw also often incorporated the chromatic scale, which gave his melodic lines a subtle fluidity that seemed to allow him to weave “in and out” of chords seamlessly from all “angles”.

LJC Thinks: Yeah, that’s real music-talk. You don’t have to know this. You can just listen to the music and enjoy it, without knowing any of the technicalities, like driving a car without needing to know what’s under the bonnet (until your alternator goes)

Personally, I think it sharpens your appreciation of what’s going on, tunes up your thinking when you hear other players, helps you get more out of music and navigate other waters.

It also gives you some conceptual hooks on which to hang ideas to communicate about music, which adds interest, like reading wine tasting notes, rather than just getting blotto drinking the stuff. Dissonance, harmonic colouring, poly-tonality. Great! Open another bottle. Let’s drink to music, both pretty intoxicating stuff.

We won’t talk about the cover. I’m just surprised the graphic designer was brave enough to put his name to it. The square drawn around the edge – that would be to help you position the seam-reinforcing  Scotch Tape in a straight line, right?

Muse? Search me. Call in the Vinyl Detectives.  Mosaic’s Woody Shaw: Complete Muse Sessions describes the origin of this recording as  “audition tapes”, originally recorded for Blue Note, “but returned to Woody by Alfred Lion when he experienced remorse after selling his label” ( words by Michael  Cuscuna, I guess)

Woody Shaw was a  talented but still relatively unknown trumpeter, age just 21, and he records a demo tape for Blue Note, bristling with Blue Note heavyweights as sidemen. Extraordinary. Who paid for it?  How often did this happen? What other “audition tapes” exist? Where might it have been recorded and by whom? Discography notes are coy, just “NYC”. Does Englewood Cliffs fall within the city boundary? Search me, I’m a Londoner.

Later released  by Muse on the evil silver disc under the name Cassandranite  (Muse MCD 6007),

the engineer is credited as one “George Klabin”, who has a long career producing mostly jazz, but  whose earliest noted recording credits start a year later than this recording, 1966 (Albert Ayler Live In Greenwich Village, for Impulse)  Unlikely to be the original recording engineer in 1965 with all those Blue Note artists.

It has to have been recorded like almost all other Blue Note material, by….you know who… and you know where…possible mastered in 1983 for Muse by George Klabin, which would fit with Klabin’s profile. Perhaps our resident RVG stereo expert(s) could take a view on recording, instrument positioning, close mic-ing, reverb, etcetera.  Do we have an engineering fingerprint expert in the house? Does it have RVG qualities for 1965? That close mic-ing of the cymbals sure rings a bell.

The absence of recording credits is itself not unsurprising, as a “demo tape” without any official status, mastered 17 years after its recording, released to complement Shaw’s other Muse records in the ’80s. Not considered “Property of Blue Note”, as given by Lion to Shaw,  and so not discovered by Michael Cuscuna in his Raiders of the Blue Note Vault excercise for United Artists in the ’70s. Now there’s obscurity for you…

According to Wiki, “Shaw returned to the U.S. from Paris in 1965 to replace Carmell Jones in the Horace Silver quintet (1965–1966) and began his career as one of Blue Note Records’ “house” trumpet players”.

Perhaps that is the key. Shaw was already a known Blue Note session man, one of Horace Silver’s men. Muse’s  In The Beginning contains Shaw’s first try-out as leader for Blue Note, hence the Blue Note resources lavished on the session. The Muse record is a Blue Note, for all intents and purposes. Merely one that got away.

What looks like engineer’s initials MCR , and a cryptic 8e, when inverted. (no 9M conspiracy theories, please) Anyone any ideas? Muse, 1983. It’s not George Klabin, so it’s someone else in the production chain 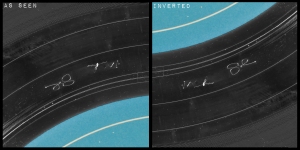 Liner Notes by Blue Note authority Michael Cuscuna further cements the Blue Note status of “In The Beginning”, with Cuscuna bringing it back within the fold of his Blue Note vault discoveries.

What a delightful find. I am still speechless at what a beautiful record this is, ’60’s jazz in the Blue Note mould, for not many greenbacks. Muse, indeed.

As always, collectors like to know about sources: another record sourced via Discogs.

The seller invited offers, so I made him a (very reasonable offer), which he promptly refused. Here’s the rub with Discogs, if your offer is refused, you can’t make another. The logic must  be “If you want it enough to make a reasonable offer, you can pay the full bloody price” . Which I now had no choice but to. The postal charge was pretty over the Ebay rate, but no choice again, I sealed the deal. Aha, the boot is now firmly on the other foot, now it’s the seller who wants favours. Could I please mark the Paypal as a gift to family or  friend, (to help him avoid commission). Would I like to BACS him the money direct to his account (from mine, to help him to avoid Paypal charges).  I have always believed business is a two way street, the exchange of favours.

You will have to guess the response. Let’s just say, at this point, the milk of human kindness was beginning to run dry. A minor wrinkle, I’m happy enough, no hassle with the price being bid up, quick delivery, everything went smoothly,  if lacking in the  comforting environment of safety-nets built into Ebay.

Discogs? I say give it a try. Woody Shaw In the Beginning? Essential.