Two months after recording his monster hit The Sidewinder, Morgan entered Englewood Cliffs to record probably his last “serious” album, and I claim controversially his finest.  Morgan is at his inventive best, eight years into his recording career with Blue Note. Shorter, Hancock and Grant Green each turn in a sublime performance, while Workman and Higgins are rock solid.

The title track  stretches out ambitiously over two-thirds of the first side, opening with a dark funereal theme which unwinds slowly, giving way to a modal platform for each musician to explore the potential free from changes. Shorter is particularly Coltranish, similar structure but in fewer notes. This is Lee Morgan’s maiden voyage: embarking on a journey to imagined destinations shrouded in mystery, the promise of New Land,  the search for elsewhere, a state of mind, an escape from the constraints of Old Land, and old musical boundaries.

For the rest of the album, moods vary from track to track, with the minor-keyed melancholy of  “Melancholee“, the outrageously pacy Mr Kenyatta, and a look backwards to mainstream bebop in The Pirate. Those in search of Tendancy Boogaloo will need to follow Morgan’s other post-Sidewinder recordings The Rumproller.  To pick out a few of the other  highlights from The Search.

Melancholee is among everyone’s favourite songs. Morgan’s bright, energetic cascade of notes with resting points of poignant sustain, vibrato and delicious timbre. Hancock maintains a ghostly ethereal presence, a flow of implied melodies that evaporate into fragments of harmony, picking at the keys. Shorter bursts in with his big, pungent tone, lower register flourishes and shrieks in the upper reaches, while Grant Green picks and fills, until the theme brings everyone back to earth.

This is a must have album, no question. Don’t waste time reading my scribblings, if you’ve got the record, and you haven’t played it a while, get it on your turntable and get reacquainted!

MM have done their usual superb transfer from original Blue Note tapes, information-rich detail in the instrument presentation, cohesive balanced soundstage, and bless them, super silent vinyl. The bass is taut and musical compared with my Liberty copy, where it is a little puffy and soft in comparison. On the MM33, Higgins drum-strikes reverberate more naturally and convincingly, and Mr Kenyatta‘s groove has more propulsion as a result.

My Liberty/NY benchmark takes a little bit of a battering this time around. Characteristically, the brass is brighter, and a little more harsh than on the MM33. Shorter and Morgan’s instruments have less body, while on the MM33 their solo’s make more sense.  The overall presentation of the Liberty/NY is a little more muddy, though not to the degree of a major fault. Having said that, I was always very happy listening to it.

On some recordings I prefer the less laid back, more assertive attack of vintage Blue Note, compared with modern pressings, but not on this occasion. Perhaps the original Plastylite edition has different strengths, perhaps my Liberty/NY was end-of-life stamper, the differences are not so huge, and a different copy or edition could swing the vote the other way. Always try to keep an open mind, but as Terry Pratchett wrote  “The trouble with having an open mind, of course, is that people will insist on coming along and trying to put things in it.”

Another set of beautiful Francis Wolff studio portraits, perfect light and shade, from inky darkest shadows to bright highlights still retaining detail. MM, you are spoiling us, this is too good. 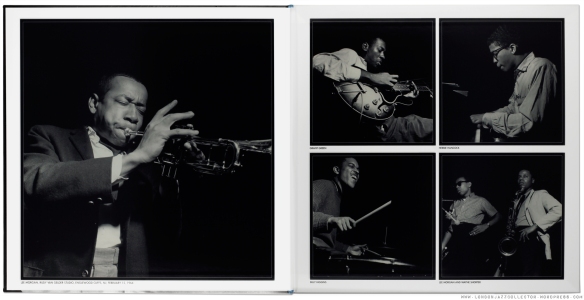 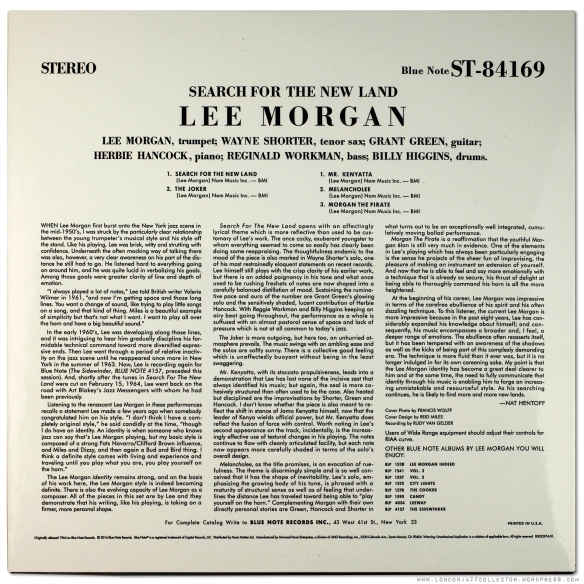 Despite being recorded in 1964, with catalogue number BLP 4169 allocated at the time, the commercial release of In Search Of The New Land was deferred for two years while priority was given to other Morgan recordings, hoping to repeat the commercial success of The Sidewinder: The Rumproller, and later recordings The Gigolo and Cornbread.  Search for the New Land was finally issued early in1966, and according to Billboard, ” achieved highly respectable sales, reaching the Top 20 of the R&B album charts“.

The 1966 original Blue Note issue was released in both mono and stereo, on NY labels, with the Plastylite ear, and was despatched in the then current final Blue Note corporate inner sleeve “27 Years Of”.

I haven’t heard the original release either, but I can tell simply by looking at it that it will sound better, because it’s available in mono and it’s got the ear!

The original mono is considered the most collectible, which is a shame because by 1964 Rudy had a pretty firm grip on stereo mastering, and I think it is a very nice stereo presentation. But the market knows best, top ten auctions in Popsike database tell the story:

Two of the ten highest valued auction was a sealed copy. The MM33 arrives sealed too – I thought I’d throw that in, a like for like comparison, only fair.

Marketplace confusion arises because, soon after its acquisition of Blue Note, Liberty went on to press more copies of both mono and stereo editions of Search For The New Land, without the Plastylite ear, but using up old stock Blue Note NY labels. Liberty also acquired the stock of Blue Note’s last corporate inner sleeve,  “27 Years Blue Note”,  which can appear with these early Liberty/NY issues. The tell-tale is whether mention is made of the absence of the ear, or simply overlooked and not mentioned.

With the stereo edition, Liberty went on to press more copies using their subsequent Division of Liberty labels, seen above,  however pressed with the same original Van Gelder stereo master metal. Made me smile.

LJC Blue Note (posted October 28, 2011) my copy and review, a Liberty/NY  pressing, Van Gelder, stereo. To be fair (to me), it was written over five years ago, when I was still in short trousers, the hi-fi was still pretty primitive, and the original rip was made on one of those things you can now  buy in Lidl for around fifty quid.

This is my only copy of Search For. It stood up well against the MM33, but ultimately, was beaten to the finish line. Damn. It’s that open mind again.

There are a few more editions around, but of these three, I am rather fond of the Blue Label United Artists editions, dating from the early to mid -70s. Everything is pre-digital, and United Artists often had access to original Van Gelder -, and can sound absolutely fabulous, though not always. Direct Metal mastering is best avoided, Capitol punishment, and the 75th Anniversary edition has reportedly been troubled with manufacturing defects, no personal experience.

Enter, our friends from Tokyo…

No, haven’t heard these either, but my preference overall is for 1st era Liberty/Toshiba (LNJ series, which I didn’t see anywhere) then King Records,  then Toshiba-EMI 2nd era, avoiding anything from Toshiba manufactured after the mid ’90s.

Before their excursion into MM33 territory, Music Matters previously released  a 2x45rpm edition of In Search Of The New Land (2009) with transfers and mastering by Kevin Gray and Steve Hoffman at AcousTech Mastering.

I have not heard this edition, so I should keep my trap shut as I am not qualified by virtue of  experience to comment, other than to say I have a few other MM 2x45rpms and I have not found them very satisfying compared to the MM33s or the original Blue Note.

But that is for you to be the judge. Any witnesses to the merits or otherwise of any other editions of this fine recording, or any other thoughts, are welcome to take the stand. If you have a lot of spare time on your hands, say, serving a long sentence with no time off for good behaviour, there are 473 pages of comments on MMs on the Hoffman Forum to read. That should be punishment enough.