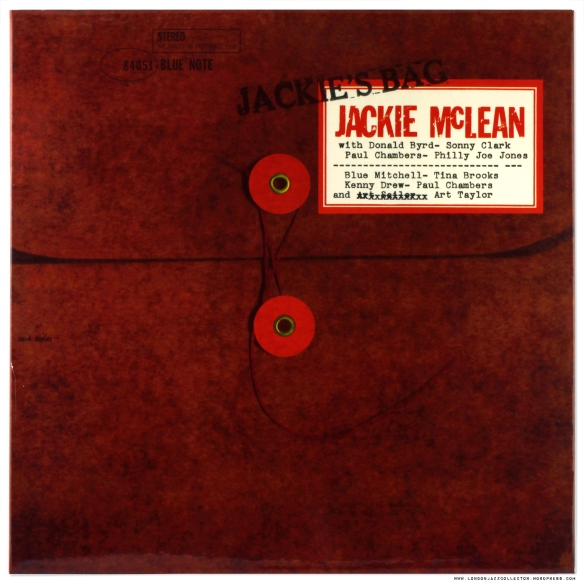 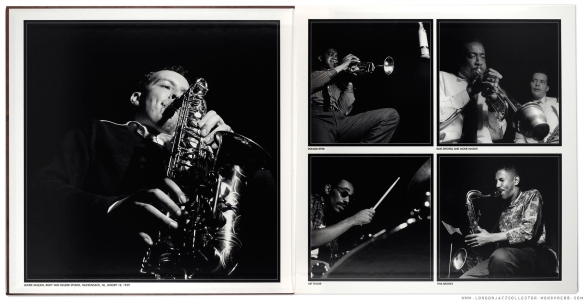 Observant readers will notice that two sides are recorded on dates almost two years apart, which, aside from the two different line-ups, serendipitously spans the transition from Van Gelder’s Hackensack home studio to Englewood Cliffs, so you can  listen out for any engineering differences between the two sides.

My own first review of Jackie’s Bag was written back in 2013, for the mono edition, here., no need to repeat myself, save that it’s a cracking record with loads of the musicians on fire,  especially desirable for its generous helping of Tina Brooks, who is otherwise in short supply.

In the course of research I came across a veteran jazz professional selling some of his vinyl collection on-line. Instead of the usual eBay seller “insanely rare” schtick, and “We do not post to Italy”… “Thanks for looking” , he couldn’t resist a tribute to this record, not something usually required to sell records on Ebay, where more space is usually given over to postal charges.  So passionately expressed, he understands the music and can talk proper musician-bollox to articulate it. I couldn’t do better, so I reproduce it here:

“Jackie Mack is back! I remember when this album first came out my musician colleagues and I played it over and over, especially Appointment in Ghana, which dipped a toe into the emerging modal world. The word poignant was invented to define Jackie who could rip your heart out at a ferocious tempo with his instantly recognizable bizarre and unique tonality.

Two groups here, Jackie, Donald Byrd up front with Sonny Clark, who would go on to record and work often with Jackie, who always understood where Jackie wanted to go. Chambers and Philly Joe step left from working with Miles at the time but get well into Jackie’s Bag.

We jump to group 2 with the underrated warm toned Blue Mitchell who also played with passion and élan but the real treasure here for me is the performance of Kenny Drew who was obviously a source of influence to Sonny Clark as well as Herbie Hancock, Wynton Kelly and others. He has Bud, pre-Silver church funk, rhythm and original melodic invention with swing that never stops. I wish he hadn’t moved to Denmark so we could have had more albums under his leadership with New York players. Paul Chambers borrowed from Miles and Arthur Tailor a disciple of the Kenny Clarke, Blakey, Philly Joe east coast hard boppers is also in great form.

This album is truly a landmark McLean album as it established Jackie’s credentials to be a Blue Note leader for many years to come.”

Personally, I’m with him. Next up, Eeeyie Caramba!, it’s Salsa Time!

Characteristically wide soundstage extending beyond the speakers, rich, dynamic and crisp presentation with clarity and focus on the music. Very detailed information for all instruments, attack and decay, vibrato, sustain, very few if any reproduction artefacts to distract you, the top and bottom registers are satisfyingly detailed and natural, instruments have that tactile presence you look for in high-end reproduction. To cap it off, silent invisible vinyl makes it a delight to listen to.

The earlier Hackensack session has a little more hard-panning, as you might expect, with Van Gelder’s evolving approach to recording,  but it’s not “fake stereo” (see Collector’s Corner)  A lot of great playing, and great tunes, it’s Jackie’s album, but some of the best moments are the contribution of the other players: Tina Brooks youthful risk-taking on tenor, Kenny Drew’s melodic inventive flow, Sonny Clark’s bubbling comping, Mitchell and Byrd’s warm steadfast brass tones, Chambers always there, a rhythm section of dependable old friends, it’s all truly in Jackie’s Bag. 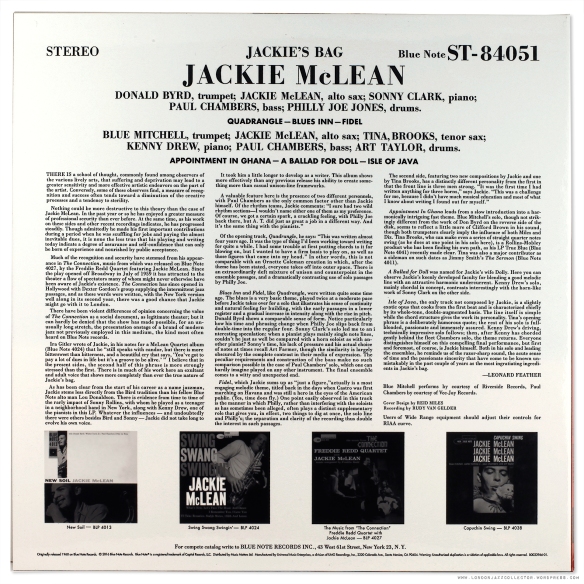 Whilst I already have established a generic history of the iconic Blue Note label over the decades, I wanted to trace the evolution of one specific  recording from its first issue through to the modern day, to see what lessons and new information might be picked up along the way. A Music Matters review copy of Jackie’s Bag seemed as good an opportunity as any. So here follows an illustrated round-up of the reissue history of BLP 4051, Jackies Bag. There are a few interesting twists along the way, so one for vinyl detectives: a cold case study.

This issue was post-incorporation so the label is attributed to Blue Note Records Inc, with ® below NOTE. I am fortunate to own this, and it is huge room-filling mono, RVG experience takes no prisoners, ultimate quality, just perfect. Forget what is on the tape, that was merely a step on the way to create this.

Popsike picks up the story, and it’s not good news for fiscal austerity. The piggy bank really needs be fairly obese to have postie deliver one of these to your home. 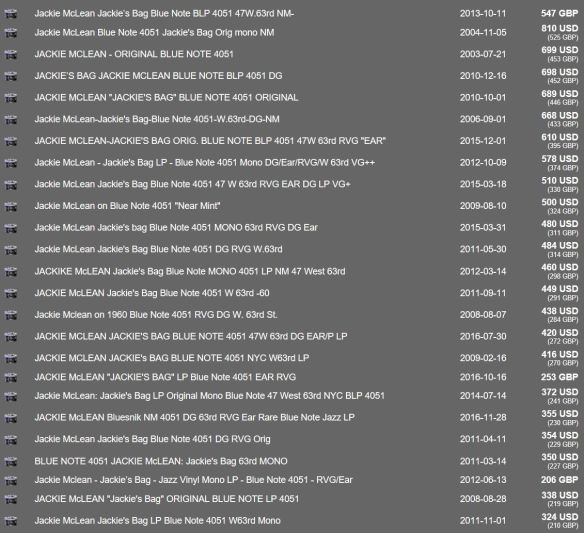 Popsike’s Top Twenty Five auctions gives you a feeling for the target price of best condition original copies. Not quite in the Holy Grail league, but still a significant purchase for the collector of original pressings.

It should be possible to construct an algorithm based on number of high quality copies auctioned, and average price of originals of high quality , which translates into a number, a “scarcity/desirability  index”. I might give it a go.

The 1st pressing according to Cohen is deep groove, however, there are a lot of copies on 47 West 63rd label without a deep groove, such as mine, below. Among the highest price auctions, note occasional omission of DG in the description. Fall 1961 was around the time new non-DG dies arrived at Plastylite, first seen on records released in September 1961, also around the arrival of the NY label.

It was customary to use up old stock labels first, the many non-DG copies on 47 West 63rd could have been pressed some time into the NY label era (1962-66) before applying a newly printed  NY label. .

Second pressing: NY label, both DG and no DG

Just to confuse the collector, a second issue appears on NY labels, found with and without deep groove (with deep groove pictured below).  Though deep groove is closely associated with early titles, from 1962 and the following three to four years,  DG dies appear randomly, and are potentially misleading of provenance.

The Blue Note era ends in 1966 without a stereo edition.

With stereo the new consumer format of choice, Liberty continued to issue both mono and stereo, mono available for those who had not yet migrated to the new-fangled stereo phonos.

Liberty issued a mono edition on Division of Liberty label as no NY was in the inventory, a copy I found with a

cannibalized original mono cover. No ear, and unhelpfully no information if it had RVG metal. The record was owned at one time by someone called “Raphael”. Raphael clearly hung out with the wrong crowd or went to the wrong sort of parties, as he felt he needed to protect his ownership of Jackie’s Bag by writing his name in large black felt tip on the label (left, and cleaned up with Photoshop, below).

Sacrilege, Raphael, that’s Blue Note, man. May be you need to change your friends. Great record though. Umm, may be, I could borrow it?  Bring it back Tuesday. Honest! In the modern age borrowing and lending records doesn’t really happen any more. Borrow your download?

Original Blue Note confined itself to issuing Jackie’s Bag in mono. Cohen confirms Liberty Records was the  first to release a stereo edition (below) . But what’s this?

Where the catalogue number used to be, “Electronically re-recorded to simulate stereo” says the top right corner. Oh dear, the first release in stereo by Liberty appears to be “simulated stereo”, fake stereo.

May be they just pretended it was simulated stereo to please the Marketing people and the engineer left it in mono, such things happened.  Or may be it is real stereo pretending to be fake? Red pill or blue pill? Van Gelder was well into his two-track recording system, the tape exists with two tracks,  what’s the story here?

Honesty Box (empty.) I didn’t see a single seller own up to the simulated stereo claim, merely “stereo”, and none of the pictures were sufficiently sharp to allow you to read it, only the smart collector would be in the know.

The hybrid west coast Liberty/UA Inc. kicked off with their stereo release on their distinctive black turquoise label. Normally these are excellent quality vintage reissues, many with Van Gelder heritage, but in this case the  “simulated stereo” claim continued.  May be the liner notes artwork was just reused thus repeating the  earlier “simulated” claim, but in error.

They were not alone – the Division of United Artists followed suite:

Unusually for this mostly mono Division of United Artists reissue series, this too was issued “electronically re-recorded to simulate stereo” exactly as Liberty, probably using the inherited metalwork, to save a re-mastering job, (they’ll never know) . UA also gratuitously add a note at the foot of the jacket “an original stereo recording”, words which do not appear on the Liberty, and contradict  the UA cover claim. 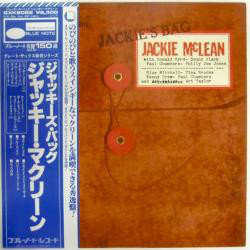 October 1992, late in the day, Toshiba grab stereo by both horns, no monkeying around with those simulations, full-bodied stereo. However by 1992, CD was in the ascendancy and engineering increasingly saw the  influence of solid state, transistors, and other contamination of the analog pathway, so I tend to shy away from ’90s Toshiba. Note Toshiba opt for a facsimile New York address label, sloppy.

2x 45rpm Stereo edition hailing from Hoffman and Gray at AcousTech around 2008, sourced from the original master tapes, pressed on 180-gram virgin vinyl by RTI 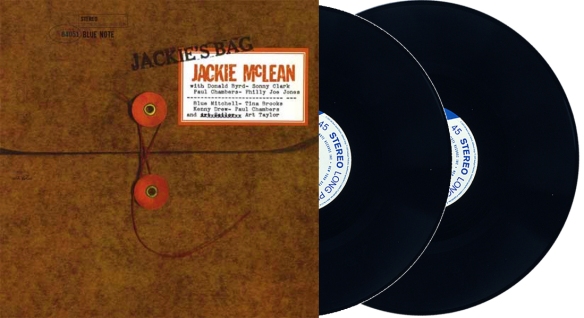 There are a few other modern vinyl editions around, like Heavenly Sweetness, 75th Anniversary Back to Black but I will give the final word to Bob Blumenthal’s notes on the RVG CD, The Evil Silver Disc™, which to be fair, add an interesting perspective on the two sessions on this album,

including bonus tracks from the same Tina Brooks session, issued on vinyl in Japan  by King Records (below), also found on the Complete Tina Brooks Mosaic.

No-one has the time or resources to go through all the dozens of reissues. Just decide your own price-point and work with that. Eventually, I obtained a mono 47W63rd original, no dg. Do I care about the DG? Not for a second,  I love my mono press, but the stereo is nice to have, and it’s not simulated, as far as I can tell. Great music.

Did I miss anything? Does anyone have any insight into the strange “simulated stereo” editions from Liberty and UA? Anything to add?

redictions are difficult to make, especially about the future. The last year has been one of many unexpected surprises. I expect the next year to be the same, full of surprises too.

I’d be surprised if it wasn’t. “Happy New Year!” Thanks for reading, and special thanks to those who take the time to comment, makes the effort worthwhile for me.