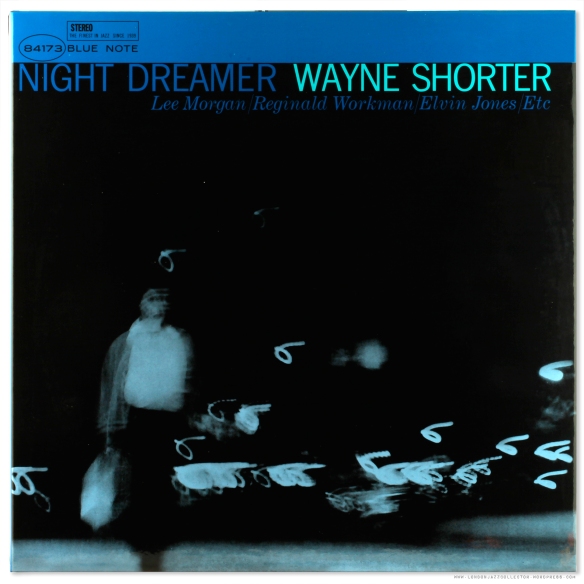 (Update: See foot of post for original 1964 mono comparator rip. Warning: price alert!) to choose one track for the

Not the Davis 2nd Quintet: the choice of McCoy Tyner is apposite: lyrical and melodic. Elvin Jones may seem more risky choice, given his power-drumming leaning, but he handles everything very sympathetically. Fellow alumni of the Jazz Messengers, Lee Morgan shows there is more in his armoury than just bebop and boogaloo: his own vocabulary and intonation, but not obviously seeking to occupy the same musical space as Miles, that place being already taken. Reggie Workman knows what to do.

Shorter shook off his five year apprenticeship with The Jazz Messengers, having set out his stall with some tentative VeeJay albums, now embarked on his own Maiden Voyage as a Blue Note leader, a trajectory that would earn him a place in Davis second quintet, and a bigger place in the canon of Modern Jazz

You might think a first title for Blue Note Shorter would look to showcase his Coltrane-like instrumental virtuosity and improvising skills. Instead, Shorter sets out a different stall, an original composer/ensemble. The bold musical vision presented In Night Dreamer is almost a genre in its own right – not bop not yet post-bop, but bop in transition.

Shorter’s compositions are harmonic explorations outside the bebop idiom, with extended melodic lines, avoiding predictable standard forms. Spare tunes of restrained simplicity, slowly unfold, drifting towards abstraction.  You don’t listen, dance and tap your feet to a Shorter composition, so much as absorb it through the skin.

This languorous soundscape of  varying moods and tempos  is populated with bravura  solo flights. Lee Morgan, represents Messengers continuity, throws in hot pepper driving brass figures, while Shorter sour lower register and angle-grinder burr moves like slow fire, crowned with eagle squawks. Coltrane is never far away, but the voice is his own. The most lyrical is McCoy Tyner, who holds everything together on a misty spiders web of rippling arpeggios and accents.

This is perfect night music. City lights twinkling in the distance, pour yourself a glass of your choice,  settle down on the sofa, wash away the tribulations of the day, and lose yourself in this gorgeous music.

A familiar characteristic MM/RTI wide soundstage stereo presentation. The pleasure is in the detail; information-rich instrument delivery -brass  intonation, timbre, attack and decay, cymbal strike hi-hat and snare bite, pedal-pump, musical bass,  all thanks to Rudy’s mastery of recording sound embedded in the analogue tapes, extracted by people who understand what they are looking for.

Original mono Blue Note edition reviewed at LJC in 2013. The jokes have at least worn fairly well, even if the critique had some way to go, cut me some slack!

And the Record Collector’s Choice is…?

With a couple of noteworthy exceptions,  collectors overwhelmingly value the mono edition over the stereo, just so you know. The Top 25 Auctions benchmark range is $250-$900, though the very top of that range is a moment of madness that cost someone dearly. Let that be a lesson. If you bid high to ensure a win, there is always a possibility that someone else has the same idea, resulting in a mid-air collision in which the second-placed price setting is in the stratosphere.

Somebody put value on that writing on the cover, $461 USD to be precise.

I happen to own the original mono, and I can assure you this is not just “original-fetish”,  for me anyway. Room-filling vintage mono is so satisfying to hear it never occurs to you that it is mono, you are in communion with the music. Even at this late stage, I am convinced Van Gelder thought in mono.

Liberty Records, later end of the ’60s by the looks of it, followed by a chronology of the changing face of United Artists reissues. United Artists went to town with at least four reissues, all stereo, and most seem to bear VAN GELDER hallmarking. Interestingly, we see the blue label black note as the earlier around 1973, and the white note variant from UAMARG after 1975.

That about rounds it out for the alternatives.

No doubt there are a few others, like this South Park rino (record in name only) Mint! Shrink! $6! Well, its not a bad place to start, but you can do better.

’70s, a new decade,  a change of direction, Wayne Shorter checked into Weather Report. Heavy electric bass, drums and percussion, and Joe Zawinul’s synthesisers duelling with the horn, music of a different sensibility. I bought a lot of WR at the time,  and occasionally I bring one down from the shelf, and see if I find it still listenable. The answer, sadly, remains no. Am I missing something?
(Apologies: there seems to be a glitch at WordPress, this article was published on January 29, not January 5 (according to WordPress) so I am republishing)

DGmono asks for a like-for-like LJC rip of the original 1964 Blue Note mono as comparator. OK, you must judge for yourself which you prefer (accepting the limitations of 320k MP3 via a pc – at least its coming from the same hifi system)

In the interest of fairness, I should add the mono original took me several years to source and cost over five times as much. Opinions welcome.