Tracks taken from three different studio sessions and a live recording, between 1956-59

In The Swinger you get the very polished Kenny Burrell note-picking alongside some of the best players of the late ’50s, and more important, you get a large helping of Tina Brooks, including Tina live on stage at The Five Spot.

“a plaintive sinewy tone; a floating, legato rhythmic sense not unlike Lester Young’s; and an ability… to compensate through timbre and ‘presence’ for sometimes commonplace melodic ideas.”

Rosenthal’s  nailed the tone and the rhythmic sense;  perhaps I’ve not listened to enough music to judge his ideas as “commonplace”. Going out solo on a limb without a predictable pathway back, youthful bravado winging it, in a tight corner swinging to another branch and abruptly back to terra firma, off balance, just in time to take off again in another direction. You occasionally sense he has run his course for that piece, and rightly hands the tune back.

There is nothing worse than players who, if you let them, will solo for ever!

Tina Brooks, like Hank Mobley, is always welcome on my turntable. Aside from his four albums as leader  (eventually), I’m always on the lookout for his appearance on sessions, like those with Freddie Hubbard (Open Sesame) Jimmy Smith (The Sermon, Cool Blues), Jackie McLean (Street Singer) , and Kenny Burrell (On View at the Five Spot Café, Blue Lights, and this session, The Swinger). Tina was appreciated by his fellow musicians, less so by studio bosses. He made no further recordings beyond 1961, the final curtain fell over a decade later in 1974, age 42, thirteen lost years.

Burrell’s warm, straight-ahead style fitted effortlessly with everything from soul-jazz organ through to big band scores, and he carved out a unique position among the handful of players that dominated ’50s jazz guitar.

“His style was hewn from electric blues, bebop and classical guitar in almost equal measure, resulting in a sound that was at once refined and raw, eloquent and boisterous. He could play beautiful unaccompanied chordal passages, frenetic single note barrages, supple blues vamps and swinging bebop lines – all these ideas being superficially disparate, yet clearly coming from the mind of a player with a clear idea of what he wanted to sound like.”

Burrell  opens with melodic lyricism, evolving into fast bursts of virtuosity, fleet linear runs that melt into technically advanced chord progressions, easing back with some bluesy figures before heading off in another improvised direction, all underpinned by an acute rhythmic sensibility –  a player accompanying himself.   He is a remarkable player, all the more remarkable that  most of a guitarist’s work is done with only four fingers and six strings, compared with the pianist (ten fingers eighty eight keys).

Burrell favoured a warm, rounded mid tone, boosted through amp tone-controls set to emphasise the mid-range, a clean sound that demanded continuous flow of ideas, using the musical canvas to the full. Both Burrell and Jim Hall managed to position the jazz guitar in an ensemble with or without piano, moving seamlessly from comping chords to delicate solo. (Jim Hall even more so the remarkable ability to play guitar like piano, in duet with Bill Evans)

One for any vintage guitar fans, Burrell’s  distinctive sound flows from a Gibson Super 400CES semi-acoustic (1959 model, pictured), Cremona Brown sunburst with humbucking pickups, and a rounded Venetian cutaway (soon after replaced by a C-shaped Florentine cutaway to provide easier access to the very highest notes). A thing of beauty to behold, where form meets function.

The Super 400 was played at times by George Benson, Larry Coryell, Wes Montgomery and Lee Ritenour. The distance between the strings and the fretboard (the “action”) on a 400 is very low, perfect for chording and linear runs, but not especially suited to note-bending requirements of rock, whose players favoured the solid bodied Gibson Les Paul (confession, I was a ’60s string-bender, Gibson Les Paul).

When the Gibson Super 400 started life it is said the 400 referred to its price in dollars.  A 1959 Super 400 in fair shape, with Pat. Applied For humbucking pickups, today fetches up to $50,000. The value of vintage guitars seems to stem from a combination of scarcity (few players could afford one at the time)  and the number of very very wealthy rock stars today who want to own one. Quite different from umm..records.

Take twenty different sax players and a sharp-eared jazz fan should be able to identify the player within a few notes. What makes each player sound different is the musician, breath,  not the instrument or the the reed. Electric guitar sound is more influenced by the instrument  and amp, though the musical approach should still shine through.

Another bit of vintage equipment trivia: jazz guitarists rarely carried their own amp – mostly they used whatever amplification was available at the recording studio, which in the case of Van Gelder’s studio included the legendary Fender Tweed Deluxe amp – a  suitcase-sized  linen-covered pine box with three knobs, five tubes and one 12″ speaker (pictured left, also used on recordings by both Green and  Burrell) and an Ampeg Gemini (right). Unlike guitars and records, even record collectors, vintage amps don’t age gracefully.

How Van Gelder miked the guitar/amp  (or a direct feed?) is a more interesting question, but that’s about enough vintage music equipment-bollox for one post.(I think may be the first at LJC)

World First Appearance Series 1979-80, Japan-only vinyl not subsequently reissued in the US (as far as I can find out) 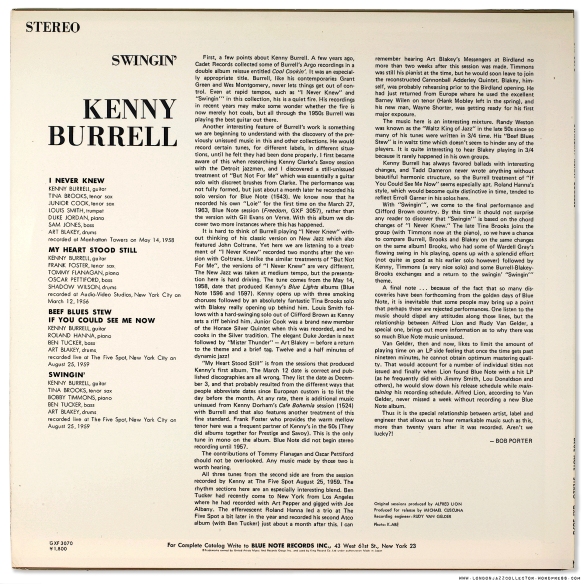 Significance? Well, the one on the left is the 1st pressing. Does that matter? Incomprehensible splutter… of course it matters!  First is first, second isn’t, obviously. Clearly you’re not getting  this “original” pressing thing..

Unissued elsewhere at the time, but wait.  What about the Mosaic Complete Tina Brooks Blue Note Quintets?  Surely  these tracks  have since been reissued by master-curator Michael Cuscuna? Nope. Some, indeed many tunes but not this one.

Mosaic doesn’t include the Kenny Burrell sessions because despite being recordings for Blue Note, they are not Brook’s Quintets. Nor do they turn up on the Liberty/United LT Series, or various two-fers. Uniquely in Japan. Not a Japanese reissue, but a  first pressing.