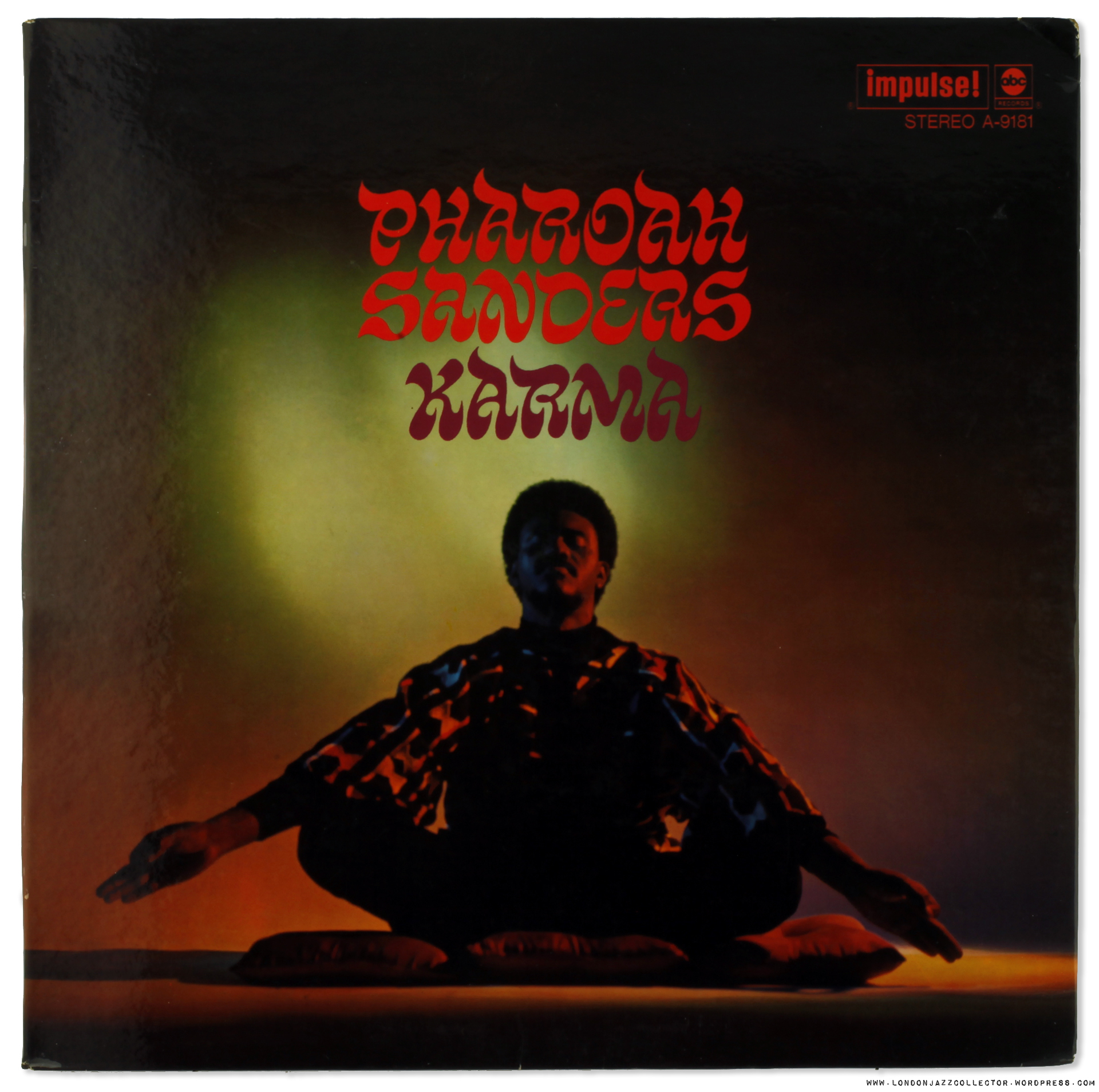 Selection: The Creator has a Masterplan (Part 2)

That’s it? That’s The Master Plan? Peace and Happiness, for Everyone?

Yesss Sir. Everyone. Throughout the land. No-one’s disagreed with it so far. No-one has said, I like the sound of Happiness, I’m just not sure about Peace.  It’s a slam-dunk.

Tell me, this Creator, does he have any kind of track record in Plan delivery – on time and within budget? Is there an Off-Plan option, like an opportunity to get in before the Master Plan is actually completed? Yeah, I guessed not.

What if I don’t like either, neither Peace nor Happiness?  What then?

You could always emigrate to Canada, Sir, it’s outside The Land. That’s an option. How’s your French?

What if I decide I don’t like The Master Plan, can I send it back?

Certainly, Sir. If not completely satisfied with Peace and Happiness, you can return The Plan before the end of the trial period. Normal life will be restored: War, Pestilence, along with Famine, Death, and Digital Audio.

Peace and Happiness sound great, count me in!

Terms and Conditions: Peace, Happiness and The Creator™ are registered trademarks of Now & Zen Productions Inc. Peace may not be available in all territories; exclusions apply. 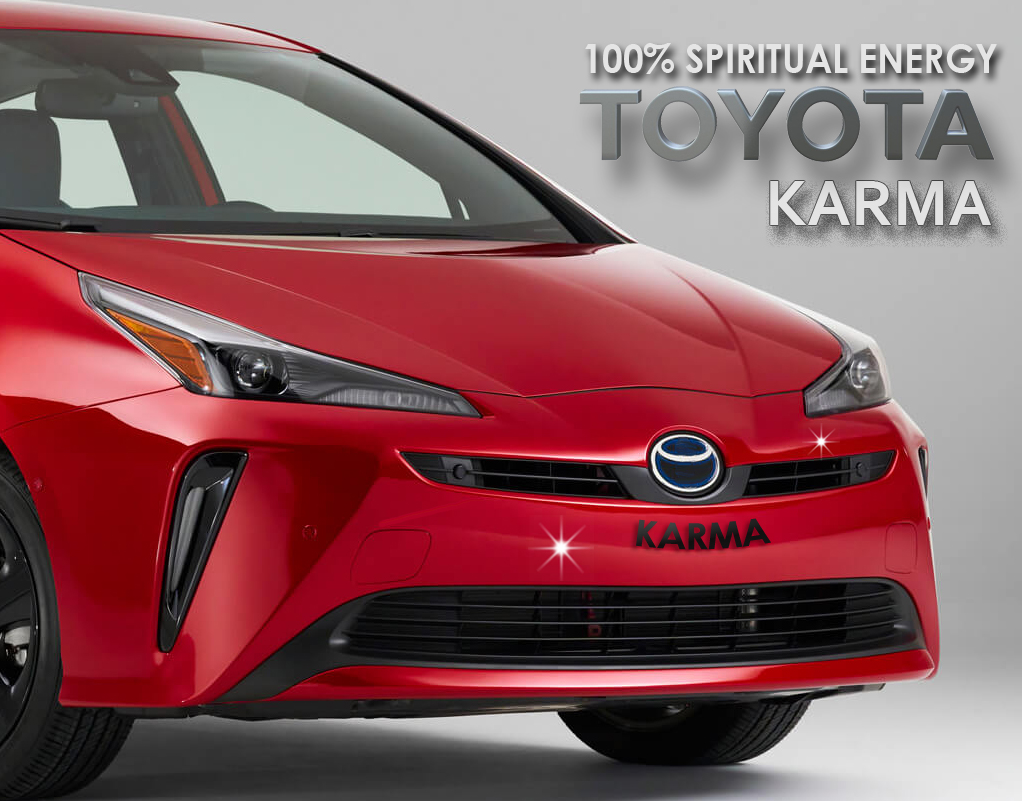 Introducing the all-new Toyota Karma, the world’s first production automobile to run entirely on Spiritual Energy. 100% renewable; range on full charge from 1km up to 1,000km, depending on qualifying good deeds in previous life.  Generous trade-in available on all electric vehicles, including Tesla – follow LJC for details.

Karma, some love it, some loathe it. Canada’s Amazon verified-purchase reviewers have their say:

Reviewed in Canada on 22 April 2019: 1.0 out of 5 stars “Don’t buy this album. Opening track is almost 33 mins. of the most annoying noise I have ever heard. Get some Art Pepper stuff and you will be happy.” One person found this helpful. (Laurie Pepper? Just askin’)
Reviewed in Canada on 2 June 2021; 5.0 out of 5 stars “Heavy and deep. Amazing artist that takes me far, far away to another world…love it!” (That would be another world far away from Canada. Understandable)

That’s the thing with music. There is just “it”. Someone liking or disliking “it” doesn’t tell me about “it”, but about them, about their listening tastes, it’s the same music. Which is why I don’t take too much notice of “likes” and “dislikes”, the universal currency of customer reviews. More likes = better music.  What I want is people to articulate what it is that they like or dislike about “it”. What is it about the music that annoys you, or that you love? Get started, reach for the words, tell me something I can use.
LJC says:
Sander’s formula works through contrasting segments: a dramatic point of entry, the establishing passage, mounting intensity, rising to tumultuous distortion, exorcism via the brass tube, and a descending path back to peace. It works for me in a different way to conventionally structured jazz compositions and performance. It is life at a different pace, an escape room, and oddly therapeutic.
Leon Thomas’s yodeling I take light-heartedly. Pharoah wanted him on board, part of his artistic vision. It’s difficult to disagree with Peace and Happiness. Musically, it is like a relaxing soak in a spirit-cleansing warm bath, rather than a bracing cold shower, though I am not sure Pharoah would have approved of the description.

Stereo Impulse original; black/red rim label, Product of ABC Records Inc., Impulse ABC two-box logo 2x ®, gatefold, laminated cover, original inner sleeve. The ® and two-box give it away, pressed after the Impulse ABC registered trademark, and after the unified logo-box. (The first pressing fundamentalists are out in force today!) 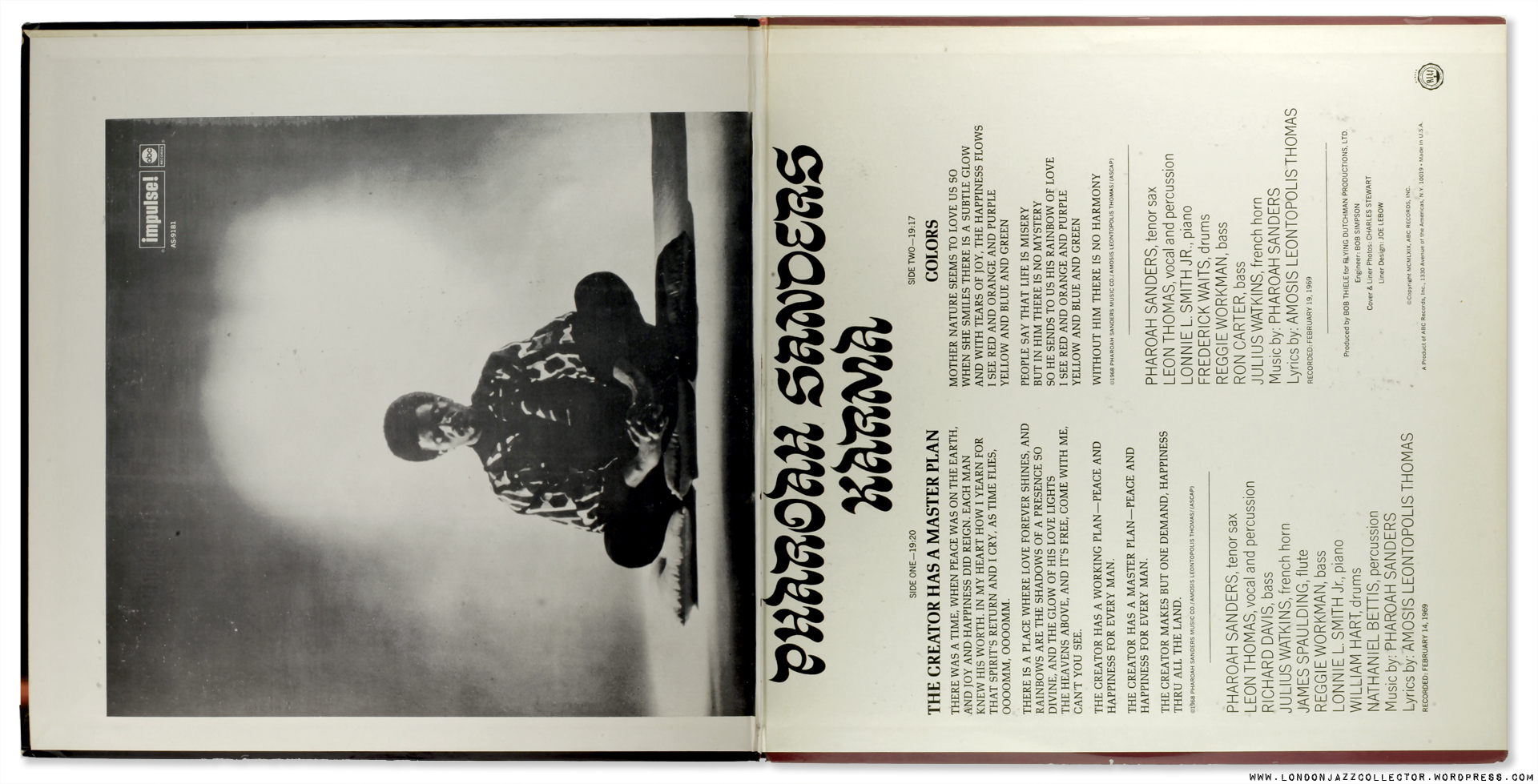 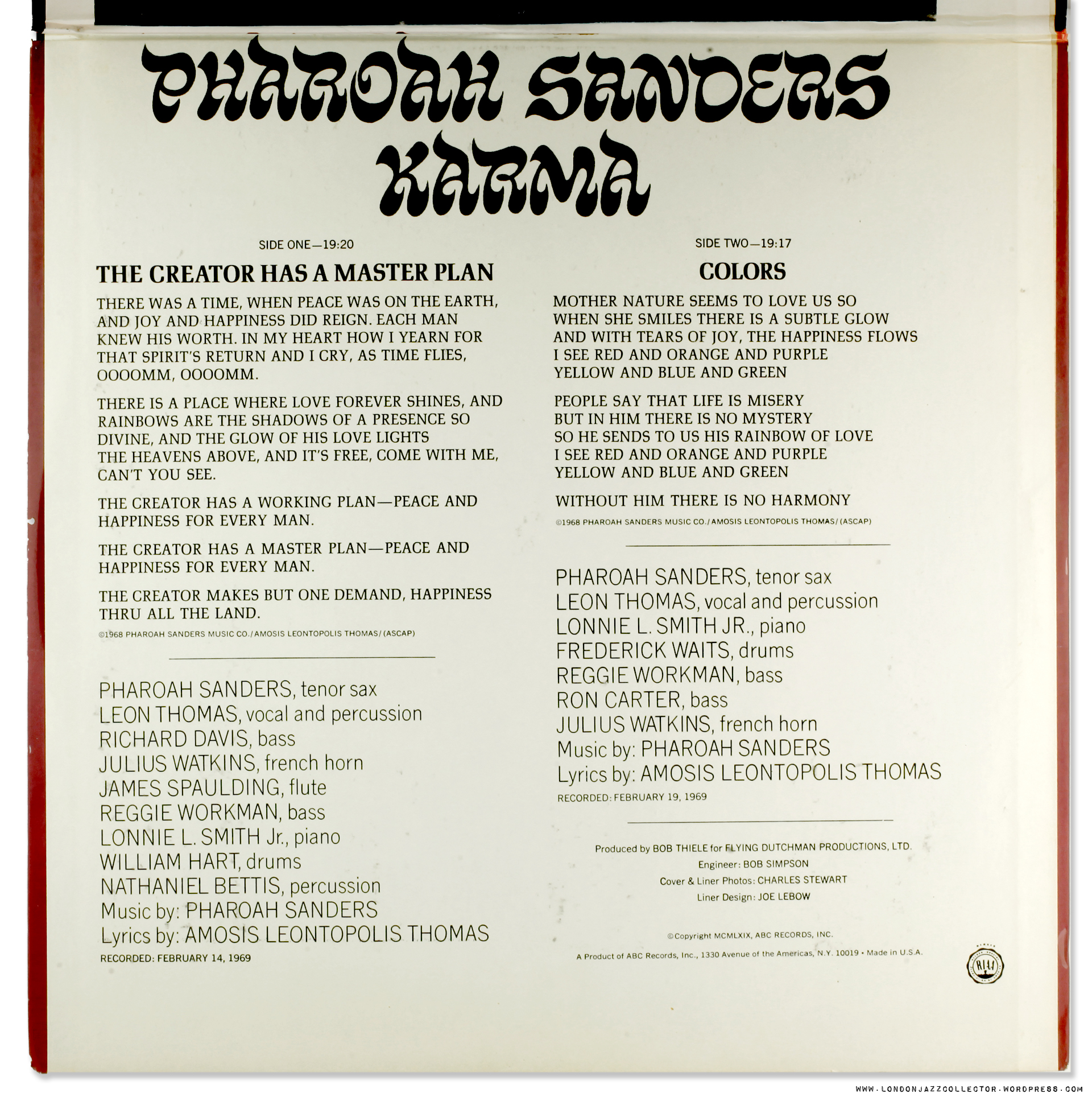 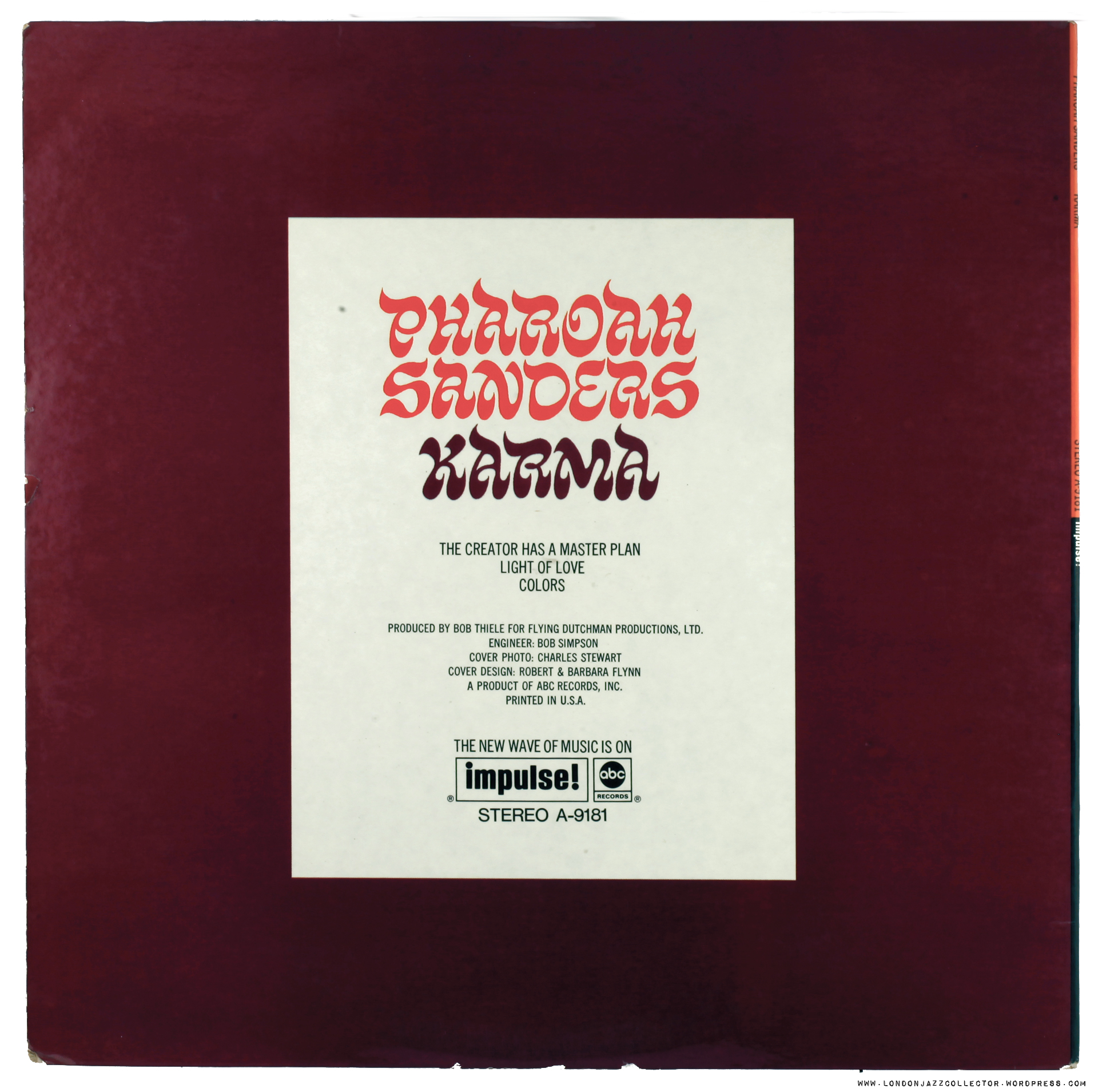 Harry M always managed to be in the right place at the right time, the underappreciated part of photographer’s art, (admittedly a press pass helps) and captured Bob Thiele (right) in conversation with Claude Nobs, founder of the Montreux Jazz Festival (pictured at Montreux 1971). Also, Leon Thomas in performance, great portrait, cool hat, forgive the yodelling. 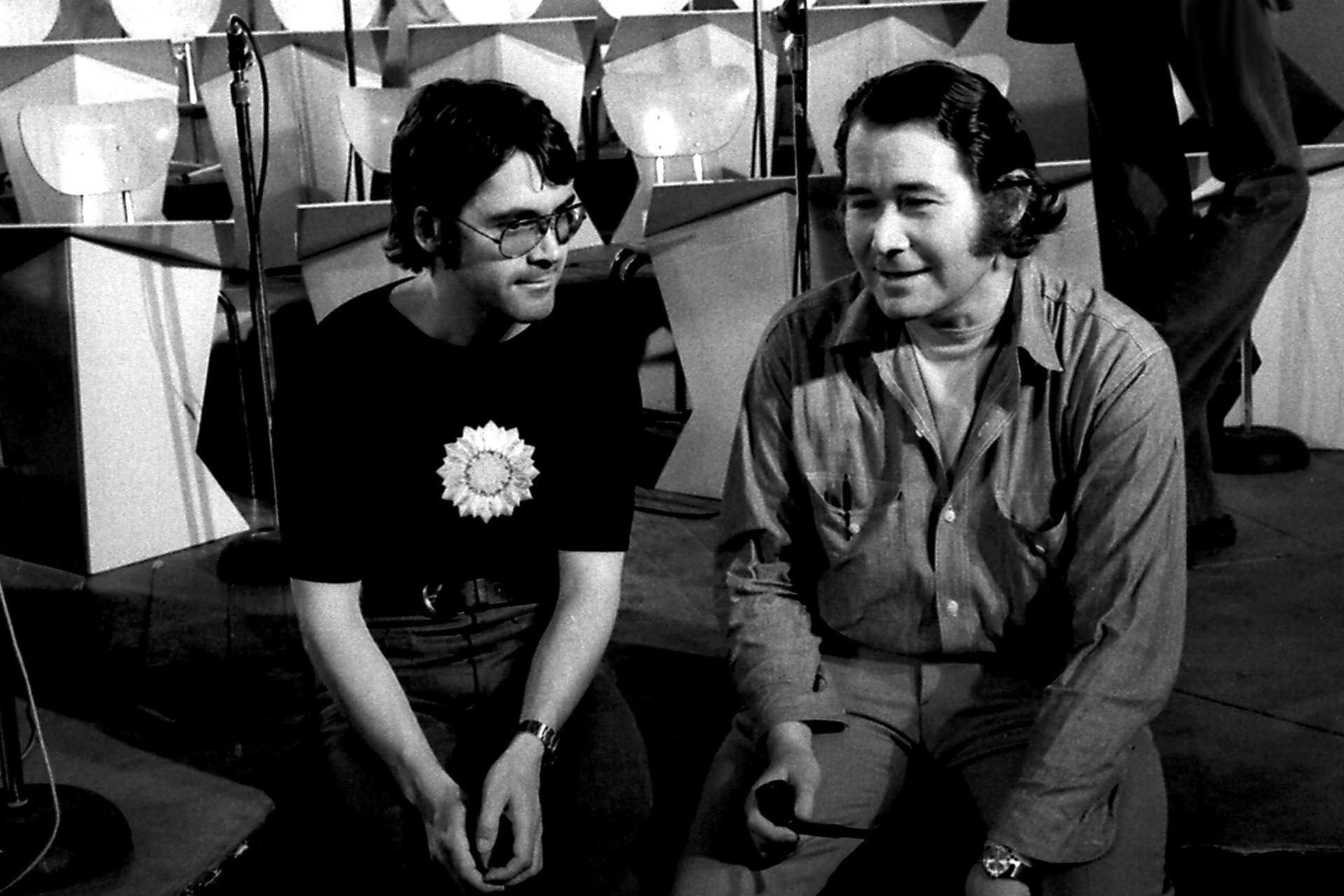 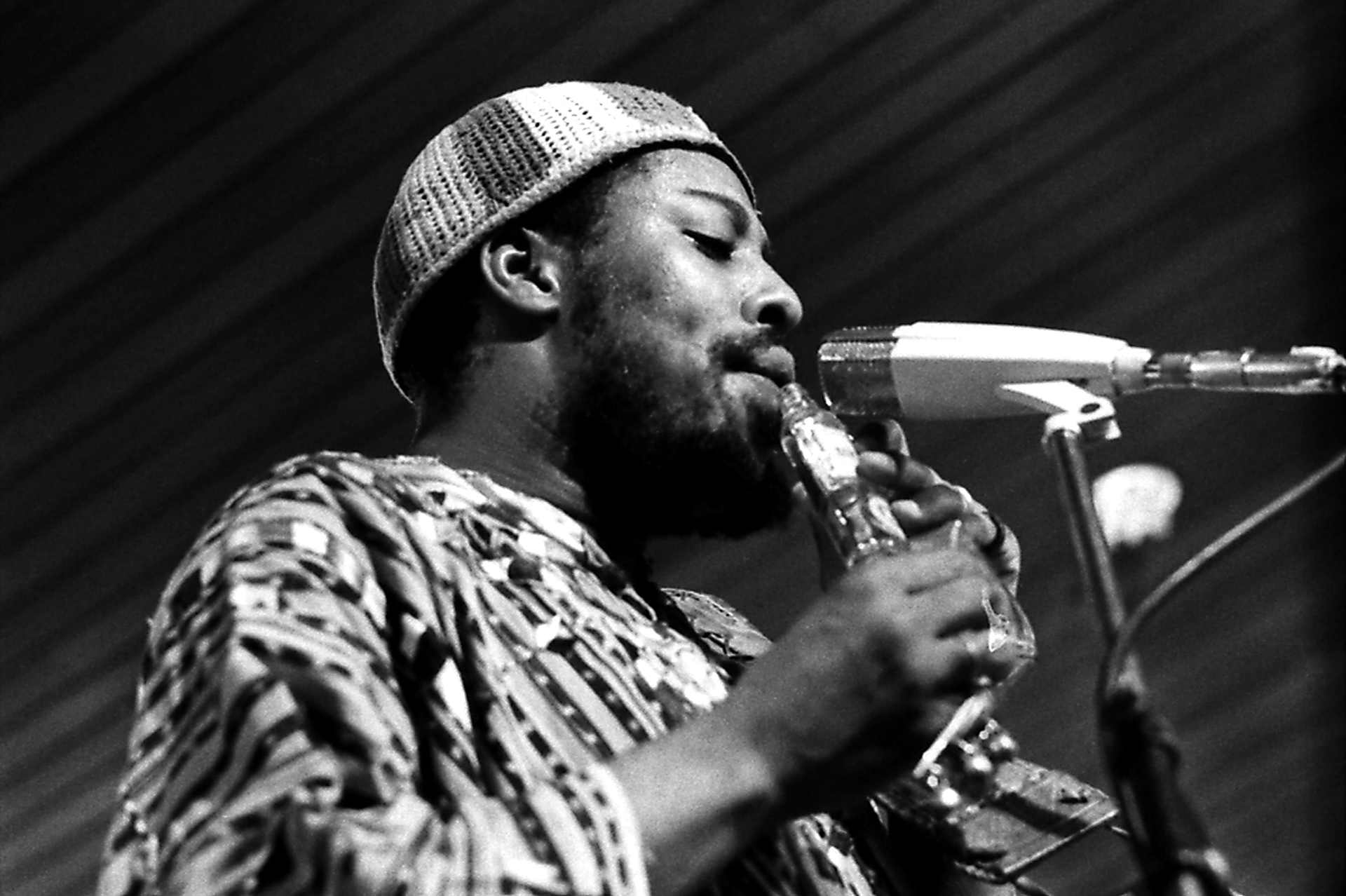 For collector’s reference, David B has sent in the first pressing label, with single box logo, no ®. 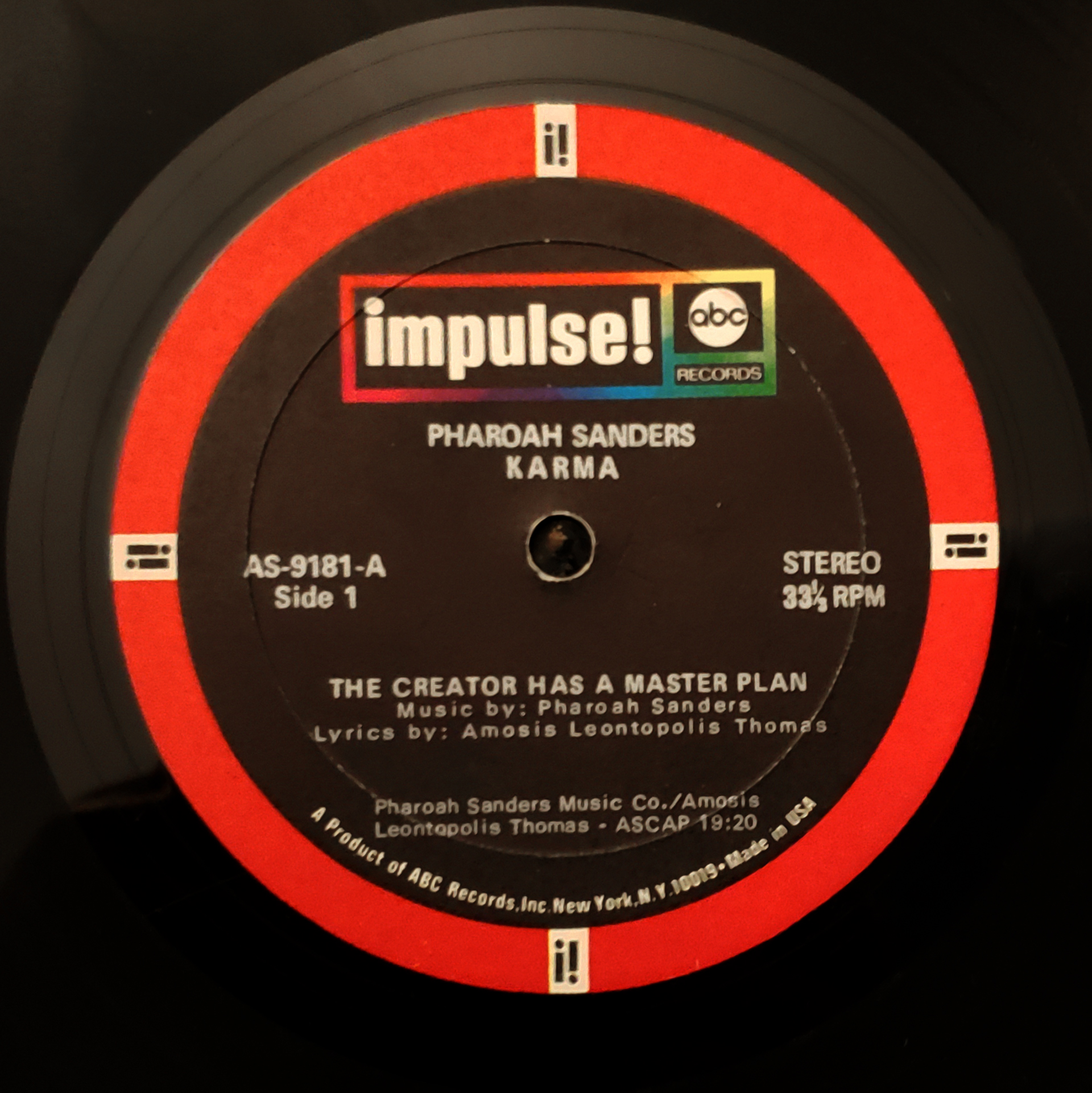 Also, a signed copy of a Pharoah concert at London’s Half Moon Theatre in1988, £8, no Cost-of-Listening Crisis then, but smoking prohibited. 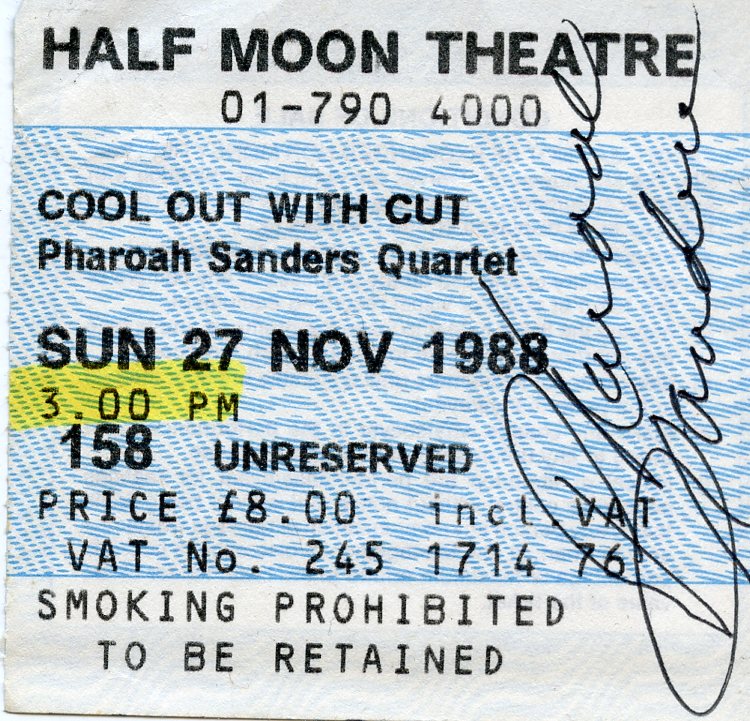 An “Audiophile reissue” is around the corner: cost-of-listening crisis, a tad expensive? UPDATE: most likely a misprint by Juno – intended as £39.99 in line with other recent import AAA titles

Industry advance news: “It was announced that the late Pharoah Sanders’ classic 1969 album Karma will be pressed on 180-gram black vinyl as part of Verve/UMe’s Acoustic Sounds, an acclaimed audiophile vinyl reissue series. The LP is set to be mastered by Ryan K. Smith at Sterling Sound from analog tapes, overseen by Acoustic Sounds’ CEO Chad Kassem and released on Dec. 16, 2022.”

Sigh.. .”Mastered … from analog tapes” Oh whoopee, mastered from analog tapes. Not “from the original tapes“? Could be just sloppy writing, like the 180-gram schtick, or a more sinister cover up.  A counsel of perfection, I know, but I expect people who write for a living to use words with more care. However, this is the music industry.

Ryan K Smith seems Sterling Sound’s answer to Kevin Gray, and what I have heard sounds pretty good. I won’t be in the running myself. As some people have commented on the Hutcherson Stick Up! title, if you are happy with what you already have, no need to rush out for the reissue. Comments welcome from collectors after the release of Karma.

Personally, I am still looking for Tauhid, Pharoah’s only Van Gelder recorded and mastered title for Impulse, at a reasonable price. No sign. Bummer.